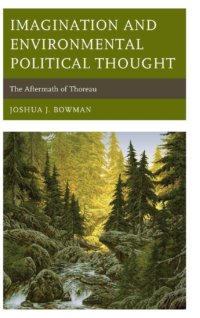 The word “environment” is old, but the habit of understanding ourselves as creatures of “the environment” is much younger. As Joshua J. Bowman notes, Thomas Carlyle first invoked “the environment” nearly 200 years ago—but it was Henry David Thoreau who raised environmentality to an exalted status. In Imagination and Environmental Political Thought, Bowman documents and assesses the influence of this Thoreuvian inheritance for contemporary environmental politics.

Bowman’s lucid investigation gathers ample evidence of Thoreau’s influence on the environmental and ecological movements. It also offers a persuasive account of the importance of the imagination for motivating political action on environmental concerns. In particular, Bowman carries through forcefully on the claims that Thoreau “offer[ed] a vision of the world and morality which animated later environmentalist rhetoric” and “in a sense, helped prime the culture of mid-twentieth century America to embrace the vision of environmentalism” (18).

Somewhat less effective is Bowman’s critical treatment of Thoreau’s imaginative vision. Following Irving Babbitt’s critique of Rousseau (by way of Benedetto Croce and Claes Ryn), Bowman argues that in Thoreau’s work the “idyllic imagination” too often eclipses the “moral imagination.” This line of criticism is most effective when directed against Thoreau’s latter-day progeny, who oppose “anthropocentric” to “ecocentric” consciousness and evangelize for the latter. As Bowman rightly insists,

“Both anthropocentrism and ecocentrism are capable of tempting man away from his hold on life. This cannot be the key tension if reality and moral efficacy are to be included in how one evaluates the quality of the imagination as distinguished from ideologies and worldviews” (30).

Babbitt’s portrayal of the imagination in tension between moral and idyllic poles does seem superior to the ideological opposition between anthropocentrism and ecocentrism. But as a framework for critiquing Thoreau this approach has a couple of weaknesses. First, the distinction between moral and idyllic imagination, too, is vulnerable to a dichotomous construction (as if some people possess a moral imagination but others lack it). Bowman mitigates this by consistently applying “moral” and idyllic” as opposite poles of a tension within each person’s imagination. With respect to Thoreau in particular, Bowman shows that “the moral-idyllic tension seen in [his] more explicit nature writings also emerge in, and may originate in, the same tension animating his thoughts on morality, friendship, community, freedom, law, and slavery” (39).

Second, Babbitt advanced the moral-idyllic distinction in response to Rousseau’s romanticism—but Thoreau is not quite a Rousseuean romantic. Doubtless, Rousseau influenced Thoreau. Yet this would have been one influence among many. Other ingredients in the heady brew of American “Transcendentalism” included Scottish common sense philosophy and the German variant of romanticism represented above all by Goethe. Thoreau and the transcendentalist writers shared certain “romantic” characteristics, such as an aversion to both traditionalism and materialism, but closer attention to their differences would have made for more incisive analysis. Bowman does acknowledge the influence of German idealism but treats it as a basically Rousseuean tradition.

To conclude, in his “Appreciation” of Thoreau, Ralph Waldo Emerson lamented:

“Had his genius been only contemplative, he had been fitted to his life, but with his energy and practical ability he seemed born for great enterprise and for command; and I so much regret the loss of his rare powers of action, that I cannot help counting it a fault in him that he had no ambition. Wanting this, instead of engineering for all America, he was the captain of a huckleberry-party.”

Bowman demonstrates that Thoreau’s legacy has been much greater than that of a huckleberry-party chief. But he affirms Emerson’s verdict that Thoreau could have built more soundly. Ultimately, Thoreau’s insistence on originality was a vice as well as a virtue: “Edmund Burke once referred to the moral imagination’s sources as the ‘bank and capital of nations and of ages’… Thoreau, by contrast, made considerable efforts to resist the influence of others. His imagination of genuine freedom as wildness and autonomy often closed him off to valuable sources of tradition” (164).[1]

Bowman suggests that the flaws of latter-day Thoreauvianism can be remedied by a return to some of these traditions, and to the Christian tradition in particular. For Emerson, however, Thoreau’s untraditional Christianity illuminates his idiosyncratic radicalism: “He could easily solve the problems of the surveyor, but he was daily beset with graver questions, which he manfully confronted. He interrogated every custom, and wished to settle all his practice on an ideal foundation. He was a protestant à l’outrance, and few lives contain so many renunciations.”

[1] Edmund Burke may have coined the phrase “moral imagination”. Thoreau, in an 1837 essay on Burke’s notion of the sublime, objected to Burke’s claim that the sublime excites terror rather than reverence: “The emotion excited by the sublime is the most unearthly and god-like we mortals experience. It depends for its peculiar strength with which it takes hold on and occupies the mind, upon a principle which lies at the foundation of the worship which we pay to the Creator himself. And is fear the foundation of that worship? Is fear the ruling principle of our religion? Is it not the mother of superstition? . . . ” (Thoreau, “Sublimity,” Early Essays and Miscellanies, ed. Joseph J. Moldenhauer, Edwin Moser, with Alexander Kern [Princeton: Princeton University Press, 1975], p. 98).

Alan Baily is an Associate Editor of VoegelinView and Associate Professor of Political Science at Stephen F. Austin University in Texas. He has published numerous articles on ancient Greek political philosophy.

The Future of University Credentials: New Developments at the Intersection of Higher Education and Learning

Theory of the Novel

Were the Anti-Federalists Right?