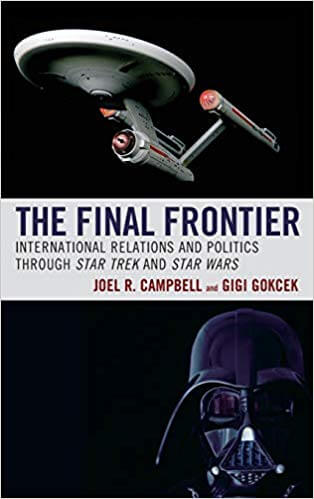 Why science fiction?  In their introduction Campbell and Gokcek explain what they believe makes science fiction unique as a genre of fiction.  It is the only type of story that consistently deals with change because its settings are in societies on other planets and/or in the future.  Unlike other fiction genres that “present acts of people, science fiction forces us to think about ideas,” ideas that can compel us to think in new ways.  It also “presents a variety of possibilities for the development of politics and societies” and it imagines how our contemporary scientific and political world might develop in the future.  In the first chapter “A Tool for Understanding IR: The Meaning and Magic of Science Fiction” the authors state that, while science fiction is like other genres of fiction in its capacity to “probe what it means to be human, or pick apart the meaning of life,” it is unique in its ability to do more, that is, “it examines different futures and counterfactual development, considers the possibilities presented by fictional worlds, casts a critical eye on contemporary society and current issues, and examines the interaction of humans (or aliens) with technology.”

Now, as someone who since the age of nine or ten has read and watched quite a lot of science fiction, including every episode in the original series of Star Trek and the later series The Next Generation and Voyager, I am inclined to think that in making the genre seem not only unique but actually superior to other forms of literature on the grounds that it “forces us to think about ideas” that can compel us to think in new ways, Campbell and Gokcek are overstating it.  Doesn’t all great literature involve profound reflection on the motives, passions, and also ideas that underlie actions and the understanding and interpretation of human experience?  Don’t other genres of literature also compel us to think in new ways?  While science fiction is often set in the future or in imaginary worlds it is certainly not alone it is ability to critically examine contemporary society and current issues or even the interaction of humans with technology.  But it does allow freer rein to the imagination.

So the Star Trek series (with which I am more familiar than with most of the Star Wars films) imagined a world in which human beings have somehow managed to solve the problems of international relations and war (as well as just about every other human problem) on Earth, but they still encounter such problems and conflicts in the galaxy where Vulcans are allies but Romulans and Klingons are hostile rulers of empires (although eventually the Klingons become something more like allies).  (One might say that this imagined future of Earth is a Second Reality with the First Reality stubbornly persisting outside the solar system.)  But what is the advantage of applying international relations theories to imaginary conflicts with imaginary Romulans instead of using the various international relations theories to analyze and discuss the causes and consequences of actual conflicts such as the Cold War, or the events in Europe that finally brought about World War I, or the developing rivalry between China and the United States, or the effects of the French Revolution on the rest of the world?  Well, as the authors frequently point out, the fictional conflicts are usually modeled on the actual historical events in the twentieth century.  Science fiction is not really about the future of alien civilizations any more than Plato’s Cave is about a subterranean society.

So to make such analysis possible Campbell and Gokcek provide students with both the relevant modern history and an overview of the main ideas in theories of international relations, including Classic Realism, Neorealism, Offense-Defense Realism, Classic Liberalism, Democratic Peace Theory, The English School, Marxist or Radical Approaches, Dependency and World Systems, Post-Colonialism and Post-Structuralism, Constructivism, Feminism and Gendered Politics, and Environmentalism, and they then analyze the Star Wars films and the Star Trek television series and films to show how they can be interpreted as examples of the use of various international relations theories.  They say that “one way to approach these theories is to think of them as different lenses or viewpoints through which to see and interpret the world that we live in.  Each theoretical perspective offers its unique view of how various global events can be understood and explained from the most memorable and impactful historical experiences, to the everyday interactions between people representing their respective countries.  Each theory has its proponents and logic based on empirical evidence.”  But how we decide which theory provides the best explanation is another question for which Star Trek and Star Wars seem to provide material for every perspective.

For instance, unlike Captain Kirk, Captain Picard is the very embodiment of liberal values so few episodes of The Next Generation are based on Realism but Classical Realism is much more of a factor in Deep Space Nine.  (For some reason the Voyager series receives little attention aside from a brief explanation of it as “the feminist standout” because the captain of the Voyager is a woman, Kathryn Janeway who also mentors the rescued female human Borg drone 7 of 9.)  Other science fiction movies are also briefly discussed, among them classics such as The Day the Earth Stood Still. Close Encounters of the Third Kind, and ET, as well as more recent films such as Interstellar, The Martian, and Arrival.  In fact Campbell and Gokcek discuss or at least briefly mention just about every science fiction film of any significance since Metropolis (1927) and well-known novel since Frankenstein (1818).  (They include literature but their focus is on films and television series.)  There isn’t much that I could think of that isn’t at least mentioned in this book.  The authors also discuss both Battlestar Galactica series and they provide a short history of science fiction, a primer for beginners in Star Wars and Star Trek and the history of the development of both¸ a fairly lengthy bibliography, a list of Star Wars and Star Trek original film and series characters and the actors who played them, and an Afterword that suggests future progress for humanity as imagined by science fiction.  It also lists some questions to ponder, such as the possible similarity between Putin’s Russia and the Romulan Empire, or between the campaign against ISIS and the Clone Wars.

This is a book that is packed with details, sometimes, to my mind at least, too much detail.  Some of the international relations theories have only a minor relevance for Star Wars and Star Trek and there are in places too many references that would have been better listed in an appendix.  For instance, in a section called “Science Fiction: A Primer for Beginners” there is a subsection dealing with the sub-genre of Dystopia/Utopia in which thirty-five films are mentioned and some briefly discussed in a little more than two pages.  There is similar crowding in other subsections of the chapter.  It seems as though the authors wanted to put everything they know into this book so that readers will have the maximum supply of resources for their exploration of themes related to science fiction and international relations.  Such a goal is certainly defensible, and nostalgic Star Wars and Star Trek fans will find parts of the book enjoyable and informative, but other parts are just confusing because the authors jump too quickly from episode to episode or film to film.

Since the considerable amount of science fiction that I read as a child served as the gateway to the discovery and appreciation of more traditional literature and the great non-science fiction writers, I have to consider the possibility that for many contemporary students, most of whom have grown up with more watching than reading, science fiction films and television series might serve well as the introduction to reflection on the complexities of international relations, as well as other issues.  Certainly there is by now a common academic practice of using television series and/or films to explore philosophical ideas and some of these courses are, no doubt, more serious and substantial than others.  So far there do not seem to be many books that specifically combine international relations and science fiction.  A brief search on Amazon turned up only two: International Relations through Science Fiction, edited by Joseph D. Olander and Martin Harry Greenberg (1978), and the more recent Otherworldly Politics: The International Relations of Star Trek, Game of Thrones, and Battlestar Galactica, by Stephen Benedict Dyson (2015).  Campbell and Gokcek’s book seems to be the most comprehensive of the three and I think the resources it contains can be very useful in the hands of an instructor who knows and understands the history of the last century.   But I would recommend requiring the students to read Thucydides also.