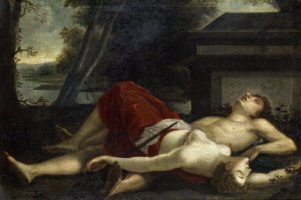 In Shakespeare’s A Midsummer Night’s Dream, the theme of romantic desire prohibited by the parents is treated in a very deliberate way. When parents, in opposition, stand athwart desire, that forbidden desire, simply by being forbidden, becomes even more enticing. Shakespeare chooses to show this psychological truth, not merely by dramatizing it, but by reflecting it back upon the dramatic action with the play-within-the-play of “Pyramus and Thisbe.”

The myth of Pyramus and Thisbe tells of two young lovers who sneak out after dark, in defiance of parental prohibition, to meet in a romantic rendezvous. But their plan goes awry, misunderstanding ensues, and the two lovers meet their deaths. Do you see, children, what happens when you do not listen to mommy and daddy? A more obvious didactic tale could not be chosen by parents in order to illustrate the wisdom of their moralistic moratorium on romance.

But perhaps not. After all, the Pyramus and Thisbe tale becomes the basis of the famous drama Romeo and Juliet. Far from dissuading young lovers everywhere, the names of these two young lovers are most famously immortalized. True love remains attractive, even when it dies young. Maybe the early demise even becomes part of the appeal. For what better way is there to show defiance regarding parental prohibition? A tragic end wins immortality for the lovers. And, at the same time, it exposes the petty way of thinking of the parents, with its quotidian calculations. Love aims without restraint at eternity, even if a parent would call this desire “narcissistic.”

Yet in A Midsummer Night’s Dream, this mythical tale of Pyramus and Thisbe is used to comic effect. So too is the drama itself within which the mythical tale is framed. The precise effect is to illustrate the ludicrous pattern according to which human desire always works. René Girard has noticed the dynamics of this pattern and described its portrayal in Shakespeare.[1]

In particular, the pattern of immature love should not be described as “narcissistic.” Girard’s “mimetic theory” offers a better explanation: namely, that all desire is learned from others. As Girard points out, “psychiatric terms must not be allowed to obscure a relationship that mimetic theory makes perfectly transparent”.[2]

The cases diagnosed by authoritarian parental figures as “narcissistic” would be better termed “pseudonarcissism,” since it is really mimetic interactions that are in play in them. It is not the “narcissistic” self that is the inner source of the behavior so much as it is the pattern of outward desire imitated from another. When a character imitates the desire of another character, the differences between them dissolve as the similarities in desire increase.

Girard calls this pattern “undifferentiation,” and he sees the knowledge of this pattern more and more evident in work of the mature Shakespeare. “A comparison of these three plays, The Taming of the Shrew, As You Like It, and Twelfth Night, reveals an evolution toward less and less differentiation among all characters, while the mimetic process itself evolves.  As time elapses and Shakespeare writes more plays, the desire represented in them belongs to more and more advanced stages of this process.”[2]

In essence, the process stems from imitation of a mimetic model, a model whose “pseudonarcissistic” desire is the dominant form dramatically determining all its imitators. The part of this desire that is described as “pseudo-” is accurately described, because the model’s own desires are inherently unstable, despite what their imitators may themselves think. “At bottom, all pseudonarcissists suspect that their admirers worship a false idol, and always already they are prepared for their own downfall. They resemble those dictators which never go to bed without expecting a revolution during the night.”[3]

Girard sees Shakespeare’s three mature comic treatments of the dynamics of mimetic desire as related: “Twelfth Night suggests the reversibility of all narcissistic configurations more strongly than the earlier comedy. As You Like It, in turn, suggested this same reversibility more strongly than earlier plays, beginning with The Taming of the Shrew, which must be regarded, in my view, as the ancestor of the whole pseudonarcissistic line in Shakespeare.”[4]

Again, whether it is exhibited by the model or by the imitator, the behavior is best characterized as “pseudonarcissistic,” because any psychological attempt to locate the source of the desire as from within is ill conceived. The dramatic action of Twelfth Night demonstrates this, according to Girard: “All psychiatric and psychoanalytic perspectives remain blind to the main point, which is Olivia’s shift from one mimetic model, herself, to another, Viola—a shift that occurs as soon as it appears that the young man will not become another Orsino and join the predictable crowd of Olivia’s worshipers.”[5]

This action within Twelfth Night becomes most clear when we compare its configurations of lovers with Phebe and Silvanus in As You Like It: “Some leftover character difference, or perhaps some conventional gender difference, remains present in As You Like It that has completely disappeared from the triangle of Olivia, Viola, and Orsino.”[6]

Further, we can compare the basic pattern of the lovers’ mimetic interactions in these two plays with The Taming of the Shrew: “Petrucchio is still essentially the traditional husband disciplining his rebellious wife, but he is also the first adumbration of the crafty lover who, through feigned indifference, compels the interest of a disdainful partner by defeating her/him at her/his own narcissistic game and thus destroying that partner’s self-sufficiency. Which is crueler, the traditional chastisement inflicted by an all-powerful husband or the modern unisex strategy of disdainful indifference?”[7]

In short, “the pseudonarcissistic structure in Twelfth Night is a more radical, more undifferentiated version of the same pattern”[8] that we see portrayed in The Taming of the Shrew (portrayed according to the more traditional clichés) and in As You Like It (which is less conventional in its scenarios of desire). But in all three of the plays, Shakespeare’s genius intuits the fundamental pattern of all configurations of romantic desire’s mimetic rituals of dominance and submission: “The fundamentals of mimetic rivalry are always the same. The narcissistic ‘master’ and ‘slave’ see an abyss between them, and the deeper it seems, the more interchangeable they actually are.”[9]

In other words, mimetic desire, especially of the romantic sort, eventually makes everything unstable by means of its undifferentiation. Eventually, the master becomes the slave, and the slave the master. Love wins, but by devastating everything.

Girard points to the sign of this mimetic instability as it is found in the “false self-sufficiency characteristic not of Olivia alone but also of Orsino”; and this very dramatic instability is also formally enshrined in the names of Twelfth Night’s characters themselves: “The similarity of names in this play also suggests the characters’ interchangeability. Viola, the Olivia of Olivia, and all characters are symbolized, or rather desymbolized—the process is not a production but a destruction of meaning and difference—by the two indistinguishable twins, Viola and Sebastian.”[10]

Thus does a play always imitate the play-within-the-play, because mimetic desire always generates its own offspring: namely, “twins”; i.e., undifferentiation.

This was originally published with the same title in The Imaginative Conservative on February 4, 2017.