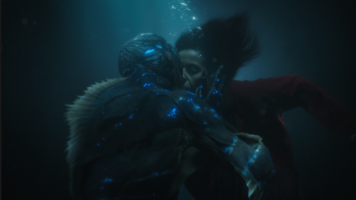 We should be grateful that, through some combination of human nature, civilization, and choice, most people act decently most of the time. But the reports of sexual exploitation in the news lately remind us that within the soul live forces of nature — some quite dark — not always contained by civilization or choice. Naïveté about the drives within us empowers them.

How odd that an escapist fantasy about a noble savage Fish Charming would be just what Hollywood thinks women need right now. Critics are fawning over Guillermo del Toro’s science fantasy The Shape of Water, and the Academy of Motion Picture Arts and Sciences has showered it with 13 nominations, including best picture.

It is 1963, and an amphibious beast from the Amazon, called only “the Asset,” is brought to a Baltimore laboratory vaguely allied to the U.S. military. The villain is Richard Strickland (Michael Shannon), a Korean War vet who drives a Cadillac and lives in the suburbs with a wife and two kids. The heroine is Elisa Esposito (Sally Hawkins), a mute cleaning lady. By day, Strickland — racist, sexist, domineering, and just plain mean — tortures the Asset. By night, Elisa falls in love with him by feeding him boiled eggs.

It’s a tale as old as time: So evil was mid-20th century American civilization and the men who ran it that any woman with sense would rather sleep with the fishes.

When Elisa decides to kidnap the Asset before Strickland can kill him, she is aided by the secretly communist Dr. Richard Hoffstetler (Michael Stuhlbarg) and her only two friends: her black colleague on the cleaning crew, Zelda (Octavia Spencer), who is also a put-upon wife; and the gay artist Giles (Richard Jenkins), who is unemployed. The good guys, in other words, are the marginalized, those who are bullied by the American Male for whom Strickland stands. That explains Elisa’s being mute: She symbolizes the voicelessness of the oppressed. In this unsubtle allegory, the Asset — silent, used, foreign-born, and different looking — is an idealized “intersectionality.” He’s all abused categories wrapped into one. The film suggests he is “a god.”

In del Toro’s Cold War United States, life is so cruel and sad that it seems we have two options: extralegal action or fantasy. Escapism is a theme throughout. Elisa lives above an opulent movie theater and masturbates in the bath (to an egg timer) every day. On television, Giles would rather watch vintage movies than the race riots on the evening news. Though he initially objects to breaking the law, he is moved to act — to help in Elisa’s plot to save the Asset — when he finally sees the parallel between his own problems as a lonely gay man and those of a black couple refused seating at a diner.

To highlight how awful civilization is, the movie makes the amphibious beast a “noble savage” à la Jean-Jacques Rousseau’s famous theory: Like the beast, Rousseau’s savage man was presocial, prelinguistic, and pure. Because savage man could not compare things, he remained unaware of inequalities, and because he could not think beyond the here and now, he was easily satisfied, wanting only “nourishment, a female, and repose.” This natural man had the beauty and simplicity of an untamed animal because that’s all he was: a less hairy ape, a pre-human human, before the species complicated itself.

There could be no romance for savage man, who was neither monogamous nor sentimental. “Any woman is good for him,” Rousseau says, suggesting that love is a female plot to gain the upper hand on the stronger half of the species. Rousseau knew that savage man’s charm — his simplicity — was destroyed by reason. But del Toro tries to have it both ways. The Asset eats Giles’s cat and scampers around his apartment like a dog, but a capacity for thought is attributed to him. We are supposed to see the Asset as intelligent (thus as a legitimate romantic interest) despite his childlike innocence and inability to think about what’s not there. “He does not know what I lack or how I am incomplete,” Elisa says of her beloved. He blinks a lot. She mistakes his ignorance for understanding, as people often do with their pets.

Because they are in a movie together and look at each other a lot, the audience knows Elisa and the Asset are supposed to fall in love. But the film shortcuts on how exactly the romance happens. He eats eggs, she plays big-band records and mops, he looks at her all puppy-eyed, and then they do it. Gross!

The cultured will say, De gustibus non est disputandum. Nonetheless some things, like ichthyphilia, are just icky. In contrast to mere arousal, real romance can happen only between mature, rational beings. The couple must be capable of sharing each other’s thoughts and feelings and enjoying the knowing reciprocity of touch. Bestiality and other paraphilias, ranging anywhere from Bill Cosby’s necroerotic rapes to agalmatophilia (belonging to those who prefer dolls), are therefore signs of unhealth — baser than but just as stupid as writing letters to a can-opener and expecting a response (from the can-opener).

In a nod to genuine romance’s requirement of logos (language, reason), despicable Strickland is shown lusting after women who don’t talk. He muffles his wife in bed and accosts Elisa in the office. This walking cardboard cutout of toxic masculinity wants woman-like objects rather than a female person.

In a second nod to logos’ being mandatory for romantic love, the Asset is said to be intelligent. Here the film fails miserably. What glimmers of intellect does the Asset show? Under Elisa’s tutelage he learns two ASL signs: “egg” and “music.” In the final scene, he manages also to copy a string of three signs Elisa had made to him earlier: “you/me/together.” We are supposed to find this romantic. Gorillas can do more.

Researchers have succeeded in teaching members of the great ape family (chimps, bonobos, gorillas) to communicate minimally using ASL signs. Skeptics suspect a lot of cuing and wishful interpretation. On the one hand, a string of signs like, and I quote, “give/orange/me/give/eat/orange/me/eat/orange/give/me/eat/orange/give/me/you” is impressive (from an ape). On the other hand, there is no syntax, no structure. Can the animal achieve a predication, a proposition with a meaning that could be true or false? It seems not. And this ability is the basis of all higher-level thought.

At best, these primates (and the Asset) seem stuck below the cognitive level of a two-year-old human. Trainers get sentimental — and Elisa would swoon — when the gorilla copies the sign for “I love you,” but it seems more likely the animal means, “give me cookie bitch.” That is, if he “means” anything at all. The situation is probably more like a dog sitting by the front door whimpering to go out — communication, sure, but no sentence.

My standards for a romantic interest may be depressingly low, but the Asset still fails. I demand the ability to predicate. A pick-up line must at least rise to the level of a proposition. “Egg” doesn’t cut it.

The animal bridegroom tales of yore had suitors who were human by Aristotle’s definition, zoon logon echon — they possessed reason and language. Hence comparing del Toro’s movie to “The Frog Prince,” La Belle et la Bête, Splash (1984), or The Little Mermaid (1989) would be inapt. The right comparison is to The Creature from the Black Lagoon. Measured against this campy but solid 1954 sci-fi movie, The Shape of Water is fathoms out of its depth.

In The Creature from the Black Lagoon, scientists search out fossils of a large animal from some 400 millions years ago. They discover that the beast — like the Asset, it’s a man-sized, bipedal amphibian from the Amazon — still lives. Del Toro’s cruel Strickland with the cattle prod mimics a speargun-wielding Richard Denning in Black Lagoon. Both are motivated by greed and ambition and lack all sympathy for their incredible discoveries.

And Dr. Hoffstetler, the Soviet mole in The Shape of Water, is a new version of the earlier movie’s ichthyologist (Richard Carlson): the earnest man of science who would keep the creature alive for the sake of scientific curiosity, and also out of admiration for it. Of course, in both films there is a woman, a beauty to catch the beast’s eye.

In Black Lagoon, we watch the speechless creature pant through the gills as he stares at a swim-suited Julie Adams, mesmerized, reaching out while working up the courage to touch her. (Men!) The Paleozoic creature embodies forces persisting within us. His home, the Black Lagoon, represents the human soul, hiding stunning beauties and wonders — but also hazards.

The scientists in Black Lagoon dream of a future in which humans might learn to breathe on other planets, but the film underscores the persistence of our past, quoting Genesis: “In the beginning, God created heaven and earth.” By emphasizing that the creature has persisted for ages without evolving, and by connecting his home the Black Lagoon to our souls, the film suggests that our creatureliness continues. Man has a depth — with drives both for good and for bad — that remains unfathomable by science and uncontrollable by technology.

You really can’t get more midcentury American than a cheesy sci-fi flick with a Judeo-Christian Freudian subtext, warning about the hubris of aiming to conquer outer space even while we cannot master the nature within us. The creature lurks beneath the surface of civilization. We would be fools to think we could kill or tame it, and yet we must not let it have its way.

What happens when we go from the Freudian beast, which makes a certain amount of sense, to del Toro’s nonsensical pop version of Rousseau? It leads people to undervalue civilization, leaves them unprepared to wrestle with the uglier drives within the soul, and helps them pretend nature is all beauty and kindness. It’s not unusual for dominant male chimpanzees to eat baby chimps in front of their mothers, bringing about the female’s estrus more quickly. Male sea otters sometimes violently penetrate baby seals while drowning them to death. Dolphins — the sainted dolphins! — engage in forced copulation, but cannot be accused of rape. Animals are innocent only because ignorant.

So much for sentimental assertions of animal superiority to civilized man. For the same reason — a lack of reason — that there can be no dolphin Harvey Weinstein or Larry Nassar, there can also be no dolphin Prince Charming.

The “voiceless princess” Elisa, when she kisses the frog, becomes one herself. And del Toro would have us believe she is better for it. The romantic finale has the couple diving off the pier together, abandoning human society for an underwater Eden. It’s an anti-civilization escape fantasy.

What women might actually need — rather than a naïve daydream about falling for a dumb beast of a man — is more civilized men and a preemptive education in the complexities of the Black Lagoon.

This was originally published with the same title in Law and Liberty on February 9, 2018.

Molly Flynn is an Associate Professor of Philosophy at Assumption College in Massachusetts. She is co-editor, with Robert Anderson and Scott Lee, of Who Are We? Old, New, and Timeless Answers from Core Texts (UPA, 2011).

A Thinker You Should Know: Eric Voegelin

Nietzsche – The Diabolical Saint of Acceptance: Explaining Why He Appeals to Both Right and Left