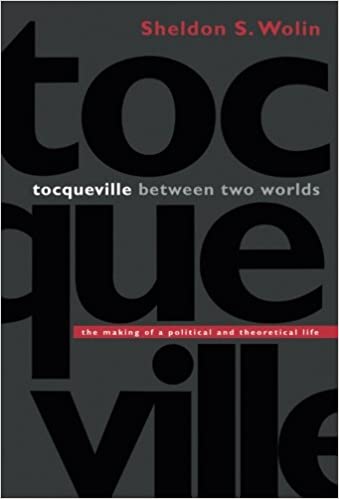 Tocqueville Between Two Worlds: The Making of a Political and Theoretical Life (2001) has the scope of a magnum opus, and would truly be so if its author did not already have a magnum opus to his name. Sheldon Wolin brings a lifetime of studying political theory to bear on an ambitious interpretation of Tocqueville’s corpus and career. Taking a synoptic view of Tocqueville’s theoretical journeys and political visions, Wolin offers a still-fresh reading of a thinker grappling with the modern powers initiated in the seventeenth and eighteenth centuries, and producing a diagnosis that would apply to the twentieth and twenty-first. In what follows, I summarize the several sections of Tocqueville Between Two Worlds, comment upon its strengths and weaknesses, and argue for its continued relevance on its twentieth anniversary.

In Part I, Wolin outlines the political context in which Tocqueville wrote and to which he reacted. That context is modernity. According to Wolin, the modern age is defined by the proliferation of new types of power: the power of the new scientific method, the economic power of the burgeoning bourgeoisie, and an increasingly rationalized state apparatus that attempted to coopt both scientific and popular power. Modern theorists, such as Thomas Hobbes, were tasked with tapping these new forms of power through novel images like the “state of nature” and new political terms like “authority.” Unlike the ancient philosophers, whose pursuit of truth amounted to reverence for universal order and harmony, modern theorists utilized truth as a means to organize politics, economics, and the natural world. However, Wolin highlights a variation of modern political thought that sought instead to limit modern power. Montesquieu, for example, countered the sweeping, power-friendly theories of his contemporaries with an antitheory: a description of communities laden with particular manners and mores that could not be coopted easily either by science or the state. According to Wolin, it was from this Montesquiean tradition that Tocqueville would confront modern power.

In Part II, Wolin presents the theoretical instruments Tocqueville used to make sense of the new form of democracy he encountered in both the United States and France. Historically, “democracy” had simply meant rule by the lower classes. In the modern age, however, democracy emerged as an abstract form of power, like “nature” or “the market,” that was attributable to no particular group. Wolin labels this abstract power “the Many.” By the nineteenth century, the Many was a force still not fully understood, which meant politics could not adequately respond to it. Thinkers like Jean-Jacques Rousseau and the writers of The Federalist put the cart before the horse when the former sought to channel the power of the Many into the general will and the latter proposed constitutional forms to limit it. Tocqueville, in contrast, sought only to describe the Many. As the basis for an adequate political response to the democratic age, this description constituted a political act. This is one of Wolin’s main insights: there is a symbiosis between theory and politics in Tocqueville’s life and thought. Tocqueville fed his political aspirations by theorizing the Many, and turned to theory to prophesy the future of democratic politics.

However, Tocqueville’s description of the Many was not a mere reporting of what he found in the United States. According to Wolin, he embarked upon a “remythologizing” project to express what was ineluctably novel in democracy and seed the resources that would counter this new form of power (Wolin 2002, 133-134). One example of remythologization Wolin points to is the role of the Puritans in Tocqueville’s thought. The outsized significance of the Puritans in the first volume of Democracy in America reflects neither Tocqueville’s skewed and limited research nor too much time spent in New England. Instead, according to Wolin, Tocqueville’s description of the Puritans is a carefully crafted “mytheme” that shows how religion can moderate equality and preserve liberty in the democratic age. Masked as “mere” description, Tocqueville’s theory is an attempt to paint a panoramic “tableau” of the power of the Many and its counterforces. In so doing, he both reveals this new phenomenon to his contemporaries and envisions how it could be controlled.

In Part III, Wolin interprets the first volume of Democracy in America. Unlike other modern theorists, Tocqueville abjured the social contract and opted instead for “political culture” to explain democracy in the United States. The Americans had managed to moderate equality not because they had a brilliant constitution crafted by a benevolent lawgiver, but because they had cultivated a strong political culture that included participatory mores. These flourished in the township, where the link between individualism and political participation—what Tocqueville would eventually call “self-interest rightly understood”—was tightest. On Wolin’s view, the political culture of the United States amounted to a “decentered corporativism,” or a sort of resurrected aristocracy that was meant to counter not a bloated monarch, but the atomizing and overwhelming power of the Many (232).

In Part IV, Wolin transitions to the second volume of Democracy in America, and it is the high watermark of his interpretation. After all, it is in the second volume that Tocqueville describes the social and cultural effects of democracy, bringing the contours of the Many into sharp relief. As an example of Wolin’s interpretive acuity, consider how he treats Tocqueville’s thoughts on pantheism, a confusing and oft-overlooked chapter in the second volume. Wolin treats pantheism not as an actual spiritual movement in nineteenth-century America, but as another Tocquevillean “mytheme.” In premodern times, the relationship between a king and his subjects mirrored monotheism. Aristocracy, on the other hand, mirrored polytheism, “with its several competing centers and consequent differences” (314). Pantheism, the religion to which democracy is most prone, “represented the cosmologized mirror of democratic despotism…. the individual’s experiences of massiveness, which likens it to being swallowed up, absorbed into the indiscriminate, creates the impression of a democratic social condition as boundless, oceanic” (314). Wolin characteristically provides little evidence that Tocqueville intended to cast pantheism as a “cosmologized mirror of democratic despotism,” but the interpretation is thought-provoking, nonetheless.

It is also in Part IV that Wolin’s attention to Tocqueville’s theoretical apparatus comes to fruition. As Wolin argues, Tocqueville the theorist/mythmaker must choose between two “imaginaries” that are linked to democracy: revolution or centralization. In other words, he can depict the power of the Many tending either toward constant revolution—a fact proved possible by French history—or despotism, which links to democracy conceptually (although not historically) through the phenomenon of uniformity. As readers of Tocqueville well know, he privileges centralization as the greatest danger, speculating that revolutions will become rare in the democratic age. “Democratic despotism,” then, and not endless revolution, emerges as the most powerful mytheme of modernity in Tocqueville’s corpus. It is the evil against which Tocqueville directs all his theoretical weaponry, showing his readers how religion, local governance, associations, and the legal profession, among other things, can curb its power. However, the very strength of these institutions and mores comes from their Montisquean particularity, and as the power of the Many grows and is coopted by the state and market, the resistance they offer may prove futile.

In Part V (as well the final chapter of Part IV), Wolin analyzes Tocqueville’s lesser-known works: A Report on the Penitentiary System in the United States, Souvenirs, and The Old Regime and the Revolution. Although Wolin summons the same depth of thought and attention to detail in these chapters, Tocqueville Between Two Worlds is first and foremost a reading of Democracy in America. I say “reading,” because Wolin’s argument is at times unclear. In the “Introduction,” he outlines two claims the book will make: that Democracy in America “represents the moment when democracy first came into focus as the central subject of a political theory” and that “Tocqueville’s theory represents an important early engagement between liberalism and democracy” (8). However, these claims are uncontroversial, accepted by almost all readers of Tocqueville, and do not require a six-hundred-page defense. Wolin is clearly up to much more in this text—situating Tocqueville in modernity, explicating the power of the Many, detailing Tocqueville’s theoretical instruments and maneuvers, and so on—but it is sometimes difficult to extract a lesson from his reading. Case in point, it is rarely clear which “two worlds” Tocqueville is between: is he between democracy and aristocracy? Theory and politics? America and France? Old World and New? The polyphony is intentional, no doubt, but it does make Wolin’s argument hard to track.

Far be it from this reviewer to critique the writing style of an intellectual juggernaut like Wolin, but readers should know he provides little by way of sign-posting, almost never pauses to review, summarize, or recapitulate, and his many chapters do not feature any recognizable narrative structure (i.e. rising-action, climax, denouement) that would render even the most complex arguments comprehensible. Instead, reading Tocqueville Between Two Worlds is a bit like swimming through cement, and one gets the sense Wolin would have simply continued analyzing and writing ad nauseum if Tocqueville’s corpus offered him the opportunity.

In terms of content, however, Wolin’s reading of Tocqueville offers a clear and consistent interpretation that may even amount to a “school” of Tocquevillean scholarship. As Raul Rodriguez has recently argued, Wolin—along with Hannah Arendt—reads Tocqueville as concerned with resuscitating the vita activa in the democratic age, in the form of mass political participation (Rodriguez 2020, 2). This is a unique and valuable lens that is absent from most interpretations of Tocqueville as a classical liberal. Ultimately, whether it’s an idiosyncratic reading or a veritable school of thought, Tocqueville Between Two Worlds succeeds in introducing a panoply of concepts and vocabulary that will enrich anyone’s encounter with Tocqueville. “Remythologization,” “mytheme,” and “the Many,” are just three mentioned in this review; there are many more to be recovered and put to use. Finally, a few chapters are really excellent and merit close attention. Chapters 1, 7, 9, 13, and 16-19 show Wolin theorizing at a very high level and presenting a novel and interesting Tocqueville that should inform all future interpretations of him.

Tocqueville once claimed he “tried to see not differently but further,” and while others were “busy with tomorrow, [he] wished to consider the whole future.” As time goes by and democracy grows up, the Frenchman’s thought becomes increasingly irresistible. While we embark on the third decade of the twenty-first century, emerging from a pandemic that has raised anew questions about rights, community, and authority, it is time to journey once more into Tocqueville’s world. We would do well to enlist Tocqueville Between Two Worlds as our guide.

Noah Stengl studies political theory at the University of Wisconsin. He has published articles and book chapters on Alexis de Tocqueville and currently works on Environmental Political Theory.

Remembering the American Century: George Weigel’s Not Forgotten
Resisting a Secularized American Founding
The Right, the Left and Localism and Traditionalism: An Overview of Recent Scholarship on the North American Right
Idolizing the Idea: A Critical History of Modern Philosophy