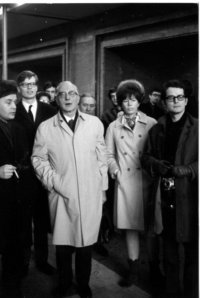 1. Voegelin presented himself as someone who knew his business and based on a solid conviction that Greek philosophy is the foundation of political science: the lecture materials were presented from this coherent starting point.

2. Devotion to truth as a desire to communicate it to students illumined every lecture and discussion, with the exploration of questions constantly reflecting the tension toward the divine ground of reality as the decisive context for exploring the human condition and political issues.

3. This sense of openness to the horizon of human experience, and refusal to truncate reality or to go along with reductionist constructs of any kind whatever, encouraged students to engage in the examination of complicated materials as partners in the discussion rather than as mere auditors absorbing information.

4. This, in turn, often induced students sympathetically to involve their own common sense, intellectual, and faith experiences in understanding demanding material in personal reflective consciousness, somewhat on the pattern of the Socratic imperative: “Look and see if this is not the case,” i.e. by validating the analytical discourse through personal understanding and pertinent questioning.

5. To this degree Voegelin, was doing science as he taught, whether in lecture or in seminar and everybody felt that this was what we were doing: the students and class were to greater lesser degree participants in a persuasive inquiry, in something appreciated as a search for truth, for truth that mattered! I think this palpable sense of participation in the activity of inquiry was perhaps the chief source of Voegelin’s popularity as a teacher.

6. Understood in this way, it becomes clear that teaching lies quite close to the center of much of Voegelin work, whether published or communicated in lectures far and wide.

7. As he remarked in a talk in 1972 at Tufts’ Fletcher School: “The foundation of [the Political Science Institute in Munich] offered the opportunity to establish political science, from the outset, on the level of contemporary science. One could avoid the conventional ballast of descriptive institutionalism, historical positivism, as well as of the various leftist and rightist ideological opinions . . . [I]t was possible to build a curriculum that had at its center the courses and seminars in classical politics and Anglo-American politics with the stresses on Locke and the Federalist Papers” (CW33, 348).

8. Thus, Voegelin’s teaching method managed to communicate the meditative grounding of his thought. GOD was not a dirty word, and he often stressed to his secular-minded and sometimes skeptical audiences (especially in Munich) that science is controlled by experience and you can’t go back of revelation and pretend that pneumatic experiences never happened. This basis of faith was more firmly in place in America, esp. in Louisiana where he taught for 16 years.

He was always telling the “saving tale of immortality,” in a variety of ways out of a conviction that the experience of transcendence is essential to man’s existence as human. This was not argued “religiously”or blandly assumed but buttressed scientifically through the facts of experience. And a professor is expected to profess truth, as far as he knows it, he thought.

9. He effectively used chalk-board diagrams in lecture; and there was generally an engaging undertone of playful levity that was Socratic in spirit we are dealing with important matters, he would sometimes say, but what we are doing with them here may not very important! He was a somewhat easy grader, as a rule, not expecting too much.

Ellis Sandoz was the Hermann Moyse Jr. Distinguished Professor of Political Science at Louisiana State University, former Director of the Eric Voegelin Institute for American Renaissance Studies, and founder of the Eric Voegelin Society. He is the author and editor of more than twenty books.

Marcus Aurelius and The Dying Wisdom of the Gladiator