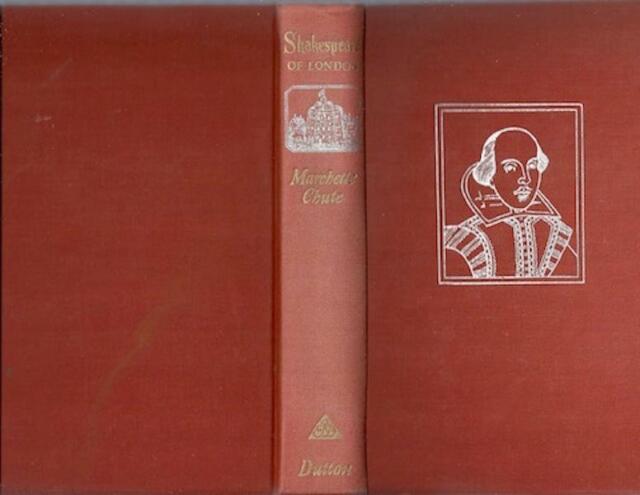 It was a classic when it was first published in 1949, but it remains a classic because it is one-of-a-kind. Marchette Chute’s Shakespeare of London is absolutely my favorite biography of Shakespeare because of her contextual approach.

Rather than focusing on biographical elements alone, Chute essentially crafts the story of Shakespeare’s life from a paper trail, from wherever she could find town records, lease arrangements, tax papers, theatre programs, personal letters, and really anything in print. She creates a holistic picture of the time period in Stratford-upon-Avon and in London while effectively showing the complexity of the London stage. Chute writes about how Shakespeare’s arrival in London was perfectly timed as the theatres themselves were just blossoming: “William Shakespeare brought great gifts to London, but the city was waiting with gifts of its own to offer him. The root of his genius was his own but it was London that supplied him with favoring weather.”

More than one chapter deals with the rigorous training a successful actor had to go through. From the physicality of stunts, fencing, and dancing to the ability to sing and capture an audience with voice, the requisite skills of an actor were truly gifts in a competitive field. The repertoire of one actor, let alone an active company, was a teeming stock of stories.

And those stories as plays were being written at an astonishing rate by Shakespeare and others. Chute describes how successful playwrights shopped their writing, relying on reframing stories the public knew well. Among other details, it is clear that Shakespeare wrote for his company because he knew the strengths and abilities of his acting family. And it was a family.

This is no encyclopedic list of chronologies but the real lives of Shakespeare, James Burbage, Edward Alleyn, and others who made up the Chamberlain’s Men. As readers, we learn of Shakespeare’s family, the myriad skills of successful actors, the competitive nature of playwrights and theatre companies, and the dictates and pleasures of theatre-lover Queen Elizabeth and her Master of Revels.

In fact, one of my favorite parts is that Shakespeare apparently was a man of integrity: “he was a relaxed and happy man, almost incapable of taking offense. He did not participate in any of the literary feuds of the period, which . . . were particularly numerous in the Elizabethan age, with its delighted talent for invective.” He worked almost twenty years in London without friction or any major offense because he had a “natural good temper and instinctive courtesy.”

​Perhaps the greatest praise I could give is that Chute is a delight to read. Yes, the sheer number of dates, names, and details could be overwhelming, yet the reader doesn’t feel it. With a fluid narrative, Chute has produced a fascinating wealth of research in a most readable form.

This was originally published with the same title in The Imaginative Conservative on April 22, 2020.