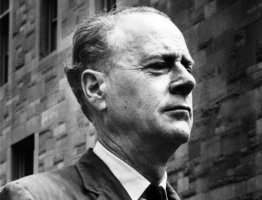 Postmodern intellectual culture is perhaps best characterized as adhering to the thesis that all reality is socially constructed. Many have mistaken Marshall McLuhan for being a prophet of postmodernity, this new era of technological change marked by a new media domination of the global theatre. But McLuhan himself said:

“I am a Thomist for whom the sensory order resonates with the divine Logos.  . . Analogy is not concept. It is community. It is resonance. It is inclusive. It is the cognitive process itself. That is the analogy of the divine Logos . . . [I]mmediate analogical awareness … begins in the senses and is derailed by concepts or ideas.”[1]

When he paid homage to his hero G.K. Chesterton, who influenced his conversion to Catholicism, McLuhan indirectly revealed something about himself, and how he wished to emulate his model:

“The specific contemporary relevance of Chesterton is this, that his metaphysical intuition of being was always in service of the search for moral and political order in the current chaos. He was a Thomist by connaturality with being, not by study of St. Thomas. And unlike the neo-Thomists his unfailing sense of the relevance of the analogy of being directed his gaze not to the schoolmen but to the heart of the chaos of our time”.[2]

Exasperated with their inability to appreciate his own efforts in this regard, McLuhan wrote to John Atkin that he was “a bit peeved at the local Thomists for leaving it to me to discover the meaning of their own thoughts instead of helping me—they held me up for years” (McLuhan to John Atkin, 16 March 1971).

Still, he resolved late in life to make charitable efforts in this regard; as McLuhan wrote to his friend, the Thomist Fredrick Wilhelmsen: “I am going to do some further work on translating myself into Thomistic terms. It is a commentary on the Thomists that I should have to tell them how to relate themselves to the contemporary world” (McLuhan to Fredrick Wilhelmsen, 10 March 1971).

McLuhan had even argued back in 1954 that “the role of the Catholic humanist is to cultivate a more than ordinary reverence for the past, for tradition, while exploring every present development for what it reveals about man which the past had not revealed. To be contemporary in this sense is no mere snobbism, not a matter of faddishness. It is an arduous but rewarding business.”[3]

With these latter remarks, I believe we find a decisive clue as to McLuhan’s own philosophy of history, implicit in his subsequent intellectual explorations. Regarding how a Thomist ought to make use of Aquinas in our time of postmodernity, McLuhan said that:

“[W]hereas St. Thomas was a great abstract synthesizer facing a unified psychological world, the modern Thomist has an abstract synthesis of human knowledge with which to face psychological chaos. Who then is the true Thomist? The man who contemplates an already achieved intellectual synthesis, or the man who, sustained by that synthesis, plunges into the heart of the chaos? I say ‘sustained’, not guided by, that synthesis; because the Catholic Thomist does not know the answers to contemporary problems in social and political ethics. He knows only when a particular line of action is promising and analogically consistent, whether it will tend to support a valid solution, and whether it is in conformity with reason and being.” (ibid xvii)

No doubt these remarks about Thomism are lesser-known facts about McLuhan. To those who heard him during the height of his fame, his much more famous pronouncements apparently failed to reveal these, his deepest concerns.

Most think of McLuhan simply as a prophet who predicted the Internet and announced the demise of nature, with the message that there is no escape from technology’s media extensions to our nature, no escape from this alteration of our relation to the rest of nature.

Indeed, McLuhan seems to be giving voice to the postmodern, “everything is socially constructed” thesis, when he says things like this about nature:

“Twenty-five hundred years of rational culture are in the process of dissolution. Age-old habits of conceptualization will not serve to train observation on the effects of the new man-made forms of energy. Since Plato, philosophers and scientists have attributed constant forms and patterns of action only to the world of ‘Nature.’ Both Plato and Aristotle, and their followers, as well as all the other schools of philosophy, have refused to recognize any patterns of energy arising from man-made technologies. Having invented ‘Nature’ as a world of rigorous order and repetition, they studied and observed only ‘natural’ forms as having power to shape and influence psyche and society. The world of man’s artifacts was considered neutral until the electric age. As the electric environment increasingly engulfed the old Greek ‘Nature,’ it became apparent that ‘Nature’ was a figure abstracted from a ground of existence that was far from ‘natural.’”[4]

At first glance, this would seem to say there is no nature; it seems to say that everything is constructed. But note the crucial qualifying word in the above passage: “only.” It suggests that McLuhan, rather, is asking us to go beyond Greek thought and extend our inquiry into nature into the places where we have not been accustomed to take it.

McLuhan wishes to draw our attention to the fact that our tools shape us: they shape our perception of what is natural. That technological mediation, altering the sensory grounds of input, is what is missing from the Greek philosophers’ notion of nature. It is not that he recommends we abandon their notion, but rather that we develop it more rigorously, because we have to contend with the way nature and culture are blended in the immediate web of our environmental perception.

A philosophy of history has to take into account both mind-dependent reality (socially constructed realities) and mind-independent reality (for example, natural units, such as rocks, trees, and horses). What is history, after all, if not an awareness of the blend, the ongoing mutual influence, between both?

McLuhan’s philosophy of history is founded on this key idea: we shape our environment, and it shapes us. History obviously encompasses the interaction of both realities: the mind-independent and the mind-dependent.

The task of a Catholic humanism is thus to think about nothing less than all of reality, in its entire scope.

This was originally published with the same title in The Imaginative Conservative on January 7, 2016.