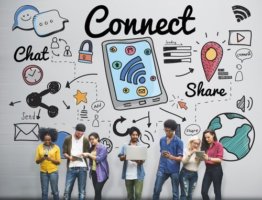 In the first chapter of Understanding Media (1964), called “The Medium is the Message,” Marshall McLuhan begins the book by explaining his most famous aphorism. Over time, the proposition has acquired the status of a cliché, such that its original meaning and intent can become obscured. But as W. Terrence Gordon, the editor of the Critical Edition of Understanding Media (published in 2003 by Gingko Press), has pointed out, in his editorial apparatus to the volume, McLuhan was seeking to describe the effects of a new technology on the social environment; hence, McLuhan even explicitly wrote at one point in that first chapter: “The medium is the social message.”

Take the example of smartphones. Smartphones are a medium. One very popular thing that people like to do with them is to send text messages. These various text messages certainly comprise the content to which the medium gives distinctive form—by also adding emojis, perhaps. But is the content of this medium the only effect that the medium generates? Is there any significance to smartphones beyond the meaning of the various text messages that they send? Or, is the realm of meaning and significance regarding smartphones limited solely to their ostensible functions? That is, do smartphones have no message for us beyond the messages we deliberately send when we do the texting?

McLuhan’s response to this last question would be: Obviously not. Beyond what we think we are doing with technologies like smartphones, there is also the reality of what is happening to us when we use them. In short, what happens to us is the social message. This social “message” is also being sent to us at the same time as we use our devices for other purposes. We may not be initially aware of what is happening and how society is changing. But, over time, the social effects of the new technology seep, at least partially, into social awareness. Usually, this happens as older people point out to the younger ones how social habits have changed in their lifetime.

The most significant of all social change is arguably bound up with popular culture. Culture reaches right down to and touches what is deepest in us. The struggle we face today is what kind of high culture we are able to preserve, given the extraordinary shift in social habits and practices that is driven by new technologies. Social media are changing our culture. What can survive of the ancient ways of high culture in the new world being shaped by our new media?

In the seventh chapter of An Intelligent Person’s Guide to Modern Culture (also published under the simpler title, Modern Culture), the chapter on “Modernism,” Roger Scruton carefully explains how modernism was an effort to preserve what was good in high culture despite the onslaught of mass culture and its vulgarities which threatened to erase high culture’s goods. And yet modernism proved insufficient in the advent of our post-modern world. What was good in high culture was its memory of humanity’s past religious practices. But the social role of modernism in preserving sacred memory seems to be almost wholly eclipsed now in our post-modern environment. Modernism’s very distinction between high culture and popular culture has itself been deeply challenged. Dr. Scruton writes:

“We should always revere the modernist heroes. But the world has changed, and their agenda cannot be ours. As my examples show, modernism involves too great a divorce between the high culture of its adepts, and the religious feelings to which it makes appeal. Standing vigil at the grave of the old religion, modernism maintains its unearthly dignity for year after year. But the grave is less and less visited, and the display looks more and more redundant and absurd. Without the religious motive, and the engrained reverence towards a sacred text, the trouble demanded by high culture seems an excessive price to pay for its dubious privilege. And there arises what has become, for teachers of the humanities, the most pressing of moral dilemmas. Do we attempt to impart our culture to the young, knowing that we can do so only by requiring efforts which they themselves may see as wasted? Or do we leave them to their own devices, and allow the culture which shaped us, and which provides our lasting images of value, to die? Those questions define the post-modern predicament.”

Dr. Scruton’s question about leaving the young to “their own devices” transcends its manner of speech and acquires a new poignancy for teachers of the humanities who struggle to teach the “lasting images of value” to today’s students who are compulsively tethered to social media and smartphones. His suggestion seems to be that we need a new post-modern strategy, one that goes beyond the modernist gambit, in order to deal with the new technological environment of post-modernity.

In the eighth chapter, on “Avant-garde and Kitsch,” Dr. Scruton begins an attempt to understand the post-modern culture of popular entertainment. Our popular culture is marked by a “loss of faith,” he says, but despite the attempts of the modernist heroes to grapple with the seriousness of this situation, today “the modernist establishment” simply operates “in order that an effective bulwark should exist between the high ground of art and the swamp of popular sentiment.” In other words, modernism persists only as a hollow elitist institution, and not as a spiritual mission to re-appropriate our sacred inheritance. As Dr. Scruton puts it: “Once institutionalized, modernism loses its character as an attempt to recover the tradition, and becomes instead a game, of no greater significance than the surrounding popular culture, and distinguished only by the erudite nature of the pain involved in enduring it.”

To prove his thesis, Roger Scruton proceeds ruthlessly to analyze the history of visual art from the very inception of modernism, showing how the collapse of the avant-garde into kitsch in our present world reveals the total failure of modernism to be a spiritual resource for most artists in today’s post-modern world. His conclusion minces no words:

“The modernists tried to rescue art from the sea of fake emotion; but the new barriers with which they marked off the higher life were captured by a priesthood of impresarios; modernism was thereafter routinized and deprived of its point. Artists ceased to defend themselves from kitsch, and adopted it instead, in a pre-emptive form. The result might be called cultural ‘pre-emptiness’: not a new form of art, but an elaborate pretence at art, a pretence at appreciation, and a pretence at criticism.”

In this post-modern environment, it seems to me that McLuhan’s attempt to draw our attention towards recognizing the social patterns generated by the new media is an indispensable attempt to galvanize art into its old role as a spiritual resource. In “The Medium is the Message,” McLuhan writes about the significance of cubism’s abstract art at the inception of post-modernity. Just as the new technologies offer us instant awareness of everything, especially today through the power of social media, cubism also “drops the illusion of perspective in favor of instant sensory awareness of the whole. Cubism, by seizing on instant total awareness, suddenly announced that the medium is the message. Is it not evident that the moment that the sequence yields to the simultaneous, one is in the world of structure and configuration?”

If our new technologies, by their very structure and configuration, offer us an instant sensory awareness, then the challenge for the artist in post-modernity is to offer a spiritual vision that is no less comprehensive. It is surely a daunting task. But spiritually how can we expect anything less? The contemplative viewpoint of the artist is required in order to interpret the social message of the media of our times, and to situate this social message in a historical context profoundly aware of the spiritual traditions of humanity. Nothing less than such a global aesthetic vision can hope to make sense of the instant sensory awareness — the technological cocoon — in which today’s mass society slumbers.

This was originally published with the same title in The Imaginative Conservative on August 19, 2016.