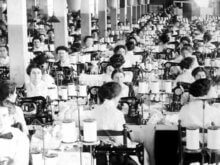 An Economist looks at Voegelin’s “Democracy and Industrial Society”

Eric Voegelin delivered his lecture “Democracy and Industrial Society” in 1963. Despite this lecture having been delivered nearly fifty years ago, it is hard to find anything in it that needs correction based upon events since its presentation. It shows that Voegelin, as well as being a “high theorist,” was a keen and attentive interpreter of current events.

One area in which Voegelin showed himself to be acutely aware of trends is the increasing importance of the service sector of the economy, even though an economist like John Kenneth Galbraith was then writing as if the economy would always be dominated by huge industrial concerns.

The dominance of the service sector over the traditional manufacturing sector has only grown greater since Voegelin gave this lecture. It is curious that so many people bemoan this fact. Think about the family of a assembly-line worker, all of whose children grow up to be doctors and lawyers. Should he regret the loss of his family’s “industrial base?” What if they “only” grow up to be dental technicians and data entry clerks? Aren’t their jobs still in many ways preferable to assembly-line work? Voegelin seems to have been free of the nostalgia for giant manufacturing operations that infects many people today.

Voegelin was prescient as well in questioning the claims prevalent at the time, forwarded by such notable economists as Paul Samuelson, that the economy of the Soviet Union was then overtaking that of the U. S. and would surpass it in a couple of decades. Voegelin notes that, despite the aggregate measures upon which this judgment was based, “One might not be reminded by these comparisons that in the Soviet Union as a whole there are not so many motor vehicles in use as America manufactures in one year.” Of course Voegelin’s judgment about the relative productivity of the Soviet economy was massively vindicated with the fall of the Iron Curtain.

People are Not Commodities

And Voegelin provides an ominous warning about demonizing one’s political opponents that we might do well to heed today, when the American president is accused by his opponents of being a Muslim operative and the previous president was accused by his detractors of orchestrating the 9/11 attacks:

“Whenever the psychology of demonization becomes socially dominant, no matter whether it springs from a Marxist or positivist, from a liberal or conservative background or subculture, an industrial society ceases to function as a democracy. Since industrial methods of production cannot be jettisoned, there inevitably arises as  an alternative the danger of a dictatorship of the right or the left.”

Voegelin was no enemy of the market economy. He appreciated the work of Mises and Hayek demonstrating the importance of market prices to economic efficiency. But like another careful reader of Mises and Hayek, Karl Polanyi, Voegelin understood that human beings do not care only about efficiency: in order to make meaningful lives for ourselves, we also need a degree of stability, something the market order tends to undermine.

A human being is not merely a commodity and an orderly human life is impossible if one can be uprooted at any moment, again and again, to suit the demands of market efficiency. As Voegelin said in his talk:

“This tempo of change is the problem facing our Western industrial society, which so far has been satisfactorily solved neither individually by the development of habits of adaptation, nor socially by means of organization. The structural transformations in the course of which forms of business become unprofitable, and expert knowledge and professional experience lose their value, obviously demand a willingness on the part of people to shift into new professions and to acquire the requisite knowledge and the experience for its implementation.”

Shifts of this kind are labor achievements of an immensely higher order than those required by professional routines, and they meet a corresponding resistance on the part of those stunned by such demands.

Once again, as with the issue of demonization, the alternative to handling this problem in a measured fashion is not that the problem will solve itself if it is ignored, but rather an intemperate solution, such as Europe has seen with the sclerotic agricultural sector often holding the rest of society hostage:

“Hence the temptation is always great, with the help of state power, to maintain unprofitable methods of production, businesses, and positions whose raison d’etre no longer exists. When the number of those affected is large enough, and they are sufficiently organized to exert political pressure, their efforts will also be successful.”

Of course, the re-training option, by which Voegelin seeks to avoid the maintenance of unprofitable methods of production, has its own dangers. Specifically, there is a high risk that the re-training itself will become a boondoggle, a way for the trainers to get a soft job and the trainees to avoid working.

Voegelin certainly would have acknowledged this risk had it been raised, but as a realist, he might well respond, “There are no perfect policies available, are there?” In short, this lecture, although delivered five decades ago, is perhaps even more relevant today than when it was given.

Eugene Callahan is a research fellow at the Collingwood Centre at Cardiff University and a Lecturer in Economics at St. Joseph’s College in Brooklyn. He is author of Economics for Real People (2004); Oakeshott on Rome and America (2012); and co-editor, with Lee Trepanier, of Tradition v. Rationalism: Voegelin, Oakeshott, Hayek, and Others (Lexington Books, 2018).