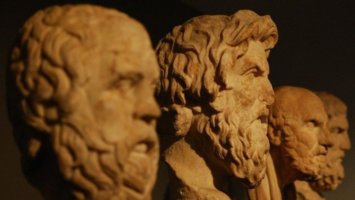 In the history of philosophy, what is the permanent achievement of the Pre-Socratics? Did they attain anything in thought that we can rightly credit to them? Or must they forever be seen as precursors to something greater?

The very name used by scholars to classify them seems to condemn them forever to the status of mere forerunners. But are they merely a tentative stage before Socrates, the Socratics, and the entire history of philosophy proper? Or did they achieve something definite in their own right?

Perhaps we can view them as bequeathing a legacy that made all of the subsequent development of philosophical thought possible. Perhaps in the history of human thought we can glimpse, in retrospect, definite stages of achievement in the realm of theoretical speculation. If so, then we might better credit the Pre-Socratics with what they in fact attained.

Consider now four stages of theoretical speculation. The first—mythical speculation—seems to be common to any human society that attains any kind of reflective consciousness about its place in the cosmos.

But the second, the third, and the fourth stages—natural theology, physics, and metaphysics—may be seen as attained in outline by the efforts of the Pre-Socratics. Although these realms of speculation are more carefully delineated in technical ways in subsequent thought, they may be rightly seen as the legacy of the Pre-Socratics.

In the first stage of theoretical speculation, that of myth, visible effects are seen as the products of unseen causes. But these unseen causes are divine powers. The gods are the hidden causes of physical phenomena.

In the second stage of theoretical speculation, however, the divine power is seen to transcend the universe. There is the realization that only one, true god exists. While there may be lesser “divine” powers within the universe, there is only one truly transcendent god who is supreme. His causal activity is coming from “beyond” the universe.

There are intimations of this in various types of mythical thought. The philosopher Eric Voegelin, for example, saw that this basic truth of natural theology—namely, the affirmation of the one true Divinity’s ultimate transcendence from the world—was something intimated in the poetry of Hesiod. Voegelin writes:

“For Hesiod, the source of truth about reality, to be sure, is divine figures, the Muses. But the Muses are not the Olympian gods; they are generated by Zeus, far from the Olympians, in his union with Mnemosyne. The source of the truth is trans-Olympian and the Zeus who generates the Muses is himself a god who has been born although he does not die. Moreover, what the Muses sing about the reality that includes the gods is sung primarily not to men but to the gods themselves, and especially to a Zeus who seems to be not quite conscious of his powers and position as the divine ordering force in reality. For Hesiod, Zeus is no god unless there is a divine reality Beyond the gods.” (Voegelin, Published Essays, 1966–1985, 392)

But since myth can only suggest such a thing indirectly, it is the subsequent criticism of myth that produces the explicit achievement of natural theology, in which the transcendent God can be distinguished from the world. We can glimpse this in the efforts of the Pre-Socratic thinker Xenophanes of Colophon who, by self-consciously qualifying his speculations, is defining natural theology as that mode of theoretical speculation that self-consciously makes room for the absolute transcendence of the supreme Divinity:

(11) “Homer and Hesiod have ascribed to the gods all things that are a shame and a disgrace among mortals, stealings and adulteries and deceivings of one another.”

(12) “Since they have uttered many lawless deeds of the gods, stealings and adulteries and deceivings of one another.”

(14) “But mortals deem that the gods are begotten as they are, and have clothes like theirs, and voice and form.”

(15) “Yes, and if oxen and horses or lions had hands, and could paint with their hands, and produce works of art as people do, horses would paint the forms of the gods like horses, and oxen like oxen, and make their bodies in the image of their several kinds.”

(16) “The Ethiopians make their gods black and snub-nosed; the Thracians say theirs have blue eyes and red hair.”

(18) “The gods have not revealed all things to people from the beginning, but by seeking they find in time what is better.”

(23) “One god, the greatest among gods and humans, neither in form like unto mortals nor in thought.”

(25) “But without toil he sways all things by the thought of his mind.”

(26) “And he abides ever in the selfsame place, moving not at all; nor does it befit him to go about now here, now there.”

(34) “There never was nor will be a person who has certain knowledge about the gods and about all the things I speak of. Even if he should chance to say the complete truth, yet he himself knows not that it is so. But all may have their fancy.”

(35) “Let these be taken as fancies something like the truth.” (trans. J. Burnet)

Once God is in principle distinguished from the world in this way, there is no need to bring God into the theoretical study of world on the level of secondary causes. In the third stage of theoretical speculation, one is free to do physics without reference to divine powers within the world. Because natural theology has marked God off as distinct from the world, any talk of divine powers operating within the world may be seen simply as deploying poetic metaphors for describing physical operations.

This third stage of theoretical speculation is able to focus on material causes and other such physical principles within the world. But it is only able to do so because God’s transcendence has been marked off, at least implicitly, by the characteristic assumption of natural theology: namely, that God’s absolute transcendence is different from the intra-cosmic physical operations of secondary causality. Aristotle describes the attainment of this mode of theoretical speculation in the Metaphysics:

“Most of the early students of philosophy thought that first principles in the form of matter, and only these, are the sources of all things; for that of which all things consist, the antecedent from which they have sprung, and into which they are finally resolved (in so far as being underlies them and is changed with their changes), this they say is the element and first principle of things. As to the quantity and form of this first principle, there is a difference of opinion; but Thales, the founder of this sort of philosophy, says that it is water (accordingly he declares that the earth rests on water), getting the idea, I suppose, because he saw that the nourishment of all beings is moist, and that warmth itself is generated from moisture and persists in it (for that from which all things spring is the first principle of them); and getting the idea also from the fact that the germs of all beings are of a moist nature, while water is the first principle of the nature of what is moist.” (i. 3; 983 b 6, trans. A. Fairbanks)

But this attainment of “philosophy as physics” is not yet metaphysical thought proper. In the fourth stage of theoretical speculation, metaphysics seeks the most fundamental realities distinguishable by thought.

In this final stage, we have metaphysics as something distinct from natural theology (which speaks of the transcendent God and his divine attributes) and something distinct from physics (which speaks of principles of physical causality within the cosmos). The crucial Pre-Socratic thinkers who most clearly delineate this fourth mode of theoretical speculation are Heraclitus and Parmenides. Their speculative achievement is to raise fundamental realities like “becoming” and “being” as realities for discussion in purely metaphysical terms.

These are ultimate realities that more fundamental than the physical operations of secondary causality distinguished in the third mode of thought. They are more fundamental because thought can distinguish them as prior to physics. They are realities that make physics possible in the first place, or that call into question the apparent reality of what physics may attain in its studies. On this level of speculation, we attain the utmost limit of what philosophy may consider, distinguishing metaphysics from natural theology (about the primary causality of the absolutely transcendent Divinity) and from natural philosophy (about the secondary causes of physics).

These four stages of theoretical speculation do not describe a linear temporal sequence of development. Rather, they merely are a conceptual outline to help us recognize in retrospect the permanent achievement of the Pre-Socratics in the realm of human thought. The Pre-Socratic legacy, therefore, is nothing less than the attainment for us of the most fundamental theoretical realms possible. Thanks to them, it is in these realms that human philosophical thought may freely roam.

This was originally published with the same title in The Imaginative Conservative on February 24, 2016.