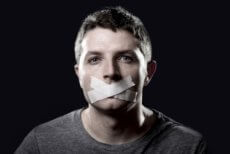 The War on Hate: The Past and the Future of Political Correctness and Liberty

Alexis de Tocqueville thought the future democratic despotism would degrade men without tormenting them. Canadian Human Rights Commissions do an effective job doing both because defending oneself against charges of promoting “hate” — or political incorrectness — consumes vast amounts of one’s time and money, so much so that even in the rare of event of successfully defending oneself, one can be sure that, in Ezra Levant’s words, the “process is the punishment.” Moreover, defending oneself means engaging in the same whining exercise as that of the complainants. Reading the transcript of a HRC proceeding displays this degradation of character that a contemporary Karl Kraus (or Mark Steyn) easily could, and has, parodied.1

Roger Scruton charitably observes that political correctness in Western societies — most notably the United States — originated in the attempt to promote civility. As people became more aware of the effect of language and terminology on prejudice and discrimination, attempts were made to find more respectful terms that cultivated civility instead of rudeness and disrespect.2  In this narrow sense, at least in the United States, political correctness entered political life as a continuation of early modern efforts to promote manners and civility among the demos.

One thinks of the guidebooks on manners produced in England and the United States in the late eighteenth and nineteenth centuries as examples of thinkers and statesmen encouraging not just civic virtues, but also certain types of manners practiced in private life that have a “trickle up” effect on public life.3 For example, George Washington advised his compatriots not to spit, gnaw their fingernails, nor put their hands “to any part of the body not usually discovered,” to argue with modesty, and to keep discussion “short and comprehensive” as ways of promoting civility and respect. During the Renaissance, authors like Castiglione promoted the virtues suitable for the court — courtesy — while later writers promoted the virtues suitable for modern republicanism — civility for the civitas. The grubby demos are well used to being exhorted and nagged to mind their manners as well as their speech in everyday private life in order to promote the health of the body politic.

Despite Washington’s moral and indeed political authority, the difference, of course, between these early modern “cribs,” as Oakeshott called them, and political correctness is that the state enforces the latter. Such is the apparent origin of the term in Marxism and Maoism as a way of designating views discordant with the party line. In the United States, the term was apparently first used to designate racial and gender orthodoxy in Toni Cade Bambara’s The Black Woman, where she claims, “a man cannot be politically correct and a [male] chauvinist too,” which reflects the New Left’s view (and that of the early modern liberal, to some extent) that the personal is indeed political.4

This very brief philological history enables us to view our contemporary situation as a descendent of the Marxist/Maoist notion that the politically incorrect individual has false consciousness and therefore needs to have his will corrected for him, and the New Left notion that male and other kinds of chauvinists need to undergo consciousness raising. The cultivation of republican manners in the early modern period relied on exhortation and implied a free moral agent; political correctness is enforced by the state and assumes the agent is not free to alter his behavior through persuasion. Political correctness aims to control a self that cannot control itself.

The rejection of liberty can be seen in section 13 of Canada’s Human Rights Acts, which empowers HRCs to prosecute people for communication “that is likely to expose a person or persons to hatred or contempt.”5 Unlike the Criminal Code, which must attend to the intent of the actor, HRCs need only concentrate on the “likely” effects of communications, where what is “likely” is determined by a professor of communications or sociology or some other social science created to serve managerial liberalism. In other words, HRCs assume you are not responsible for your communication but prosecute you — or shake you down (Levant) — as if you were at liberty. Note too the ambiguous language of “communication” instead of “speech,” which since the beginning has been used to designate the characteristic activity of the rational being.

Because HRCs focus on the “likely” effect, Levant argues they can prosecute what science fiction calls “pre-crimes,” crimes one has yet to commit. Again, lack of moral agency is assumed. This is the politics of the expressive self, whose identity we are obliged to recognize because doing so makes it feel good. The Canadian Supreme Court has already identified dignity as purely subjective, based on people’s feelings.6 Of course, the expressive self, as Kierkegaard explains in the first part of Either/Or, is an abstraction and so political correctness is an effort to wage war on an abstraction. Much ridicule has been directed toward the abstract nature of the “war on terror,” as if the enemy is an abstract noun. The war waged domestically on behalf of an abstraction deserves equal if not more ridicule.

The enforcement of recognition of the expressive self by HRCs is well known, from the Alberta Christian pastor who henceforth can never again say anything negative about homosexuality, or more to the point, about homosexual activists, to members of HRCs themselves posting hate messages on white supremacist websites in order to goad white supremacists into posting hate messages. A recent Globe and Mail article on “objectum sexuals” (OS) shows the future of political correctness.7 Lovers of inanimate things claim their love is a sexual orientation, equivalent to hetero- or homosexuality. The article contains an interview with Erika LeBrie of San Francisco, who became Erika Eiffel when she participated in a commitment ceremony to commemorate her love for the Eiffel Tower, which she displays affection towards by “spending all day touching the tower.” Lovers of German sports cars, French wine, or, in my own case, my carbon frame mountain bike, might appreciate such love, but it goes beyond a special affection of our special toy. In this case, “objectum sexuals are animists, who believe everything in the world has a spirit and a soul.” Pantheism, in other words, as Tocqueville showed in the case of the democratic soul.

Such egalitarian love is not a mental illness (despite the high rates of Asberger’s Syndrome among OS), as homosexuality was once thought to be. Rather, such egalitarian love is a superior form of love to that most of us practice. As much as I love my carbon-frame mountain bike, and dream of gnarly single tracks in the Canadian Rockies, I still treat my bike in an instrumental fashion. Except for the fact that my seat is comfortable, my bike light, and the texture and frame have a certain aesthetic beauty, I use my bike because it gives me pleasure — at least until I fall off and separate my shoulder.

Not so Ms. Eiffel, who loves Mr. Eiffel for his own sake. Of course, one might object to this characterization of her love as pure by observing that just as homosexual couples frequently exhibit one individual playing the male role and the other playing the female role, one notices that Ms. Eiffel married big Mr. Eiffel, and not, say, the yonic Ms. Smurfitt-Stone Building of Chicago or a Georgia O’Keefe painting.8 But having the temerity to suggest that nature has a way of intruding into its distortions guarantees one will be ignored by the law professors. As with the Marxian prohibition of metaphysical questions, the “democratic soul” also prohibits certain types of questions.

Our modern world is disenchanted and we treat everything as a mere object. People with OS show the future because they are able to view the light of being in the everyday object. Their love is so pure they do not need it reciprocated, which is the corruption of all love. Or so the argument goes. As my colleague Barry Cooper has suggested in his paper for another panel at this conference, HRCs might better be called the Ministry of Love for their war on hate. The example of OS indicates that not only is such love consistent with the politically correct agenda of HRCs, but actually advances it in a more egalitarian direction.9 The example of OS seems to exemplify Pierre Manent’s observation that the end of the egalitarian revolution has little to do with human beings.

8. yonic means a stylized representation of the female genitalia that in Hinduism is representative of the goddess Shakti.

9.One might say it is an even more perfect egalitarian and individualistic love than the love of oneself that Robert Bellah and his colleagues termed “Sheilaism” in Habits of the Heart, named after a woman named Sheila, who formed a religion to worship herself.  After all, as Aristotle argues, self-love involves a kind of reciprocity.  We must love ourselves before we can love another.