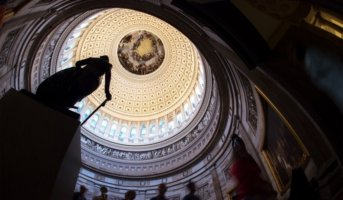 Eric Voegelin is one of those thinkers many have heard of but few have closely read.  That’s understandable; reading certain passages of the German professor can clog the brain, leaving you wondering if you even understand yourself. To make matters worse, he coined nearly ten pages worth of neologisms in Greek, according to Eugene Webb’s Eric Voegelin: Philosophy of History, each representing Voegelin’s attempt to get to the core of what philosophy and religious seeking really are. But this means he’s also sane. Voegelin wants to know the truth about God and man. Fogginess comes with that territory.

Notwithstanding his obscurity today, the ideas of this 20th-century political philosopher have been a staple in diagnosing the problems with utopian political thinking, and for good reason.  After spending some time with the excellent and just-released Eric Voegelin Reader, I want to argue that he may be even more prescient now as liberal democracies in the West face a different, mostly internal set of threats.  Voegelin has much to tell us about our existences as self-governing peoples.

The Modern Vocation of Anti-Politics

Modern political thinking, Voegelin informs us, isn’t quite political.  It attempts to replace politics with eschatological criteria.  He says the beginning of our problems lies in the insistence of our intellectuals that man can construct his own reality.  Our intellectuals evince this closure of the soul, Voegelin observes, when they insist that they define meaning, including the meanings of words, from the inside out.  This is the beginning of ideology, move noticeable in the refusal of the modern intellectual to submit to questioning.  The premises of ideologists like Georg Friedrich Hegel or Karl Marx are dogmatic, Voegelin argues, because we are not permitted to interrogate the formulas of alienated existence that constitute the heart of their systems.  According to Voegelin, determining which questions cannot be asked is central to understanding what part of reality has been deformed by the ideologist.

The good news is that the most sustained revolt against nature in the 20th century was Communism, and it failed spectacularly to overcome human nature.  One piece of bad news is that we continue to struggle to know who we are and what our freedom is for.  We no longer think that we have the ability to work toward the truth with others; conscience is now an exercise of the imperial, autonomous self.  The consequences for political order, as Voegelin would have known, are ominous.

Where We Are Now

Our communications with one another, most notably in politics, are shrill and irrational precisely because of the reduction of reason that Voegelin diagnoses so well in his essay “In Search of the Ground.” We don’t actually believe we can reach a common good in our democracies, he writes, so we resist attempts to move us politically in one direction.  Everyone, it seems, is trying to make suckers of us.  But our resistance to ideological persuasion, Voegelin says, points to our inner desire for truth.  Unfortunately, elite symbol-mongers of various stripes know this, and make their appeals even more intoxicating in order to secure our consent to their various financial, political, and social projects.  We know enough to tell that something is wrong, but we don’t actually think we can articulate the goodness of our political existence to overcome the acids of progressive ideology.

Surely one problem of our converged elites is that they lack the soulful ability even to understand that political leaders should be accountable to both their friends and their enemies.  The ongoing ignorance about the different dimensions of relational human personhood, with its social, religious, familial, economic, and political aspects, has come to look like a lack of class, a lack so revealing that it authorized the brutish boor Donald Trump to push hard against them and be rewarded for it.  But it’s more than that.

Returning to the plight of the liberal democracies, what enlightenment does Voegelin offer us?  The severe threats the West now faces are largely pre-political, yet their consequences shape the public square in the most profound ways:

Voegelin’s The New Science of Politics demonstrates “the nature of representation as the form by which a political society gains existence for action in history.”  His analysis also requires that we look deeply at the symbols that political societies use to demonstrate how they are representing “a transcendent truth.”  Voegelin wants to remind us that something as worthwhile as a free and limited political order comes from somewhere other than  human will, making the defense of such an order all the more significant and dramatic.  He punctures our comfortable and flat secular theorizing about democracy.  Whatever the pretensions of political atheism – even its softer version, as expressed in John Rawl’s “public reason” – every society acts as if it embodies a truth that transcends the contemporary generation.  Just as Voegelin says that even agnostics live as if they were immortal, the same is true of political societies whose members want to surmount their inevitable generational decline.

The Truth about Liberal Democracy

In applying Voegelin’s basic political thought to our liberal democracies, we can say that while we formally separate religion and the state, we might consider humbly that our duties to the public good are built on what Voegelin terms “the anthropological principle.”  Voegelin explicates this as a true order of the soul that is built on the love of divine wisdom, and it is that wisdom that reveals a new center in man open to transcendental reality.  This true order of the soul is the source of public authority.  Likewise, its eclipse or subjugation by, say, the ideology of progressivism – which looks only to empirical science, emancipated individuals, and ipso facto humanitarian sentiments as the sources of rights – can work only by dismissing the appeals of the anthropological principle.  This principle ultimately means that man can be the measure of political society – so far so good, progressivism affirms – but, Voegelin adds, only because God is the measure of the soul.

This is not to invoke the specter of theocracy, or even the Catholic-Christian integralism we now read in the pages of First Things. What it does mean is that because man’s soulful existence is rooted in God, man becomes the ultimate authority over the public sphere, limiting and defining its powers in concord with other citizens. Voegelin, while open to the word of Christian revelation, never focuses on a specific creed. Instead he looks to that basic fact of man’s pull to the divine ground. In different ways, he finds this pull in Parmenides, Euripides, Plato, Aristotle, and the Jewish prophets, as much as he finds it in Saint Paul the Apostle. With Israel, “the world-transcendent God reveals himself as the original and ultimate source of order in world and man.” The Jewish prophets, says Voegelin, become the scene of the battle between a divine-willed reality and the disorder of Israel’s collective existence. What is crucial, however, is that the human personality has become “the authoritative source of order in society.”

Plato epitomizes the contribution of philosophy, which Voegelin sees arising from “the resistance of the soul to its destruction by society.” This resistance, however, emerges from and is formed by the soul’s participation in divinity. This fact makes possible the creation of a new order, one that can resist corruption and, for that matter, serve as the basis of political science. Man must embrace the turn towards the divine in order to know the truth about himself, setting human existence above the city. The state cannot define man; rather it is man finding the truth of his existence in Providence that will define the scope of state power.

Our democratic political pursuits, with Voegelin’s tutoring, take on a more measured, but, I think, a more hopeful and firmer meaning. We love others and work for their best ends because we know they too are open to the divine ground. As such, our neighbors might be our competitors in many ways, but we deal fairly with them. Like us, our neighbors are working things out. In seeking our own ends, we realize that we must seek our neighbor’s ends as well. Politically, this means that there is a common good rooted in man’s nature. In reaching for the common good, we know that it cannot be a matter of simple materialism or autonomous individualism. The common good is not a matter of dollars and cents in spending programs, nor is it a matter of how small we can shrink the size of the state.

What the common good does require is that we think honestly and deliberatively about what human beings in our particular political order need to live well as free and dignified beings. At a minimum, Voegelin’s analysis of the existential truth of political order should lead us beyond the categorical absolutes and abstractions that inhibit our own liberal democracies. “What is man that you are mindful of him?” the Psalmist inquires, and that, I think, is also Voegelin’s question. Taking on this question would allow us to begin to understand why we embraced liberal democracy in the first place.

This was originally published with the same title in National Review on April 12, 2018.

Richard M. Reinsch II is the editor of Law and Liberty and the host of LibertyLawTalk. He is also the editor of Seeking the Truth: An Orestes Brownson Anthology (Catholic University of America, 2016).

The Restoration of Tradition