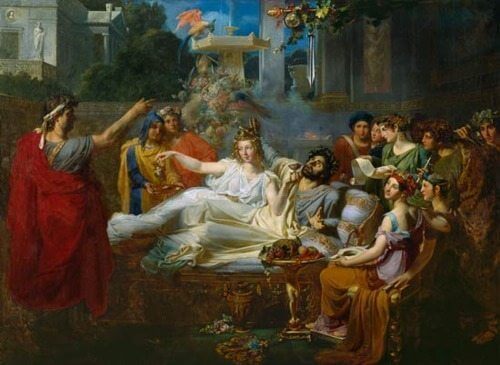 The idea seems to be that even someone who has discipline, works hard, and is very active, will nonetheless still be unhappy if their own character is already oriented towards deceit and injustice.

Even though he had many friends and relations, Dionysius did not trust any of them. Cicero tells us about how Dionysius taught his daughters, when they were young, to be able to shave him. Thus he would not have to expose his throat to the blade of a barber. In effect, this puts his royal daughters into a role usually reserved for servants. The point of the anecdote is that it illustrates how a tyrant ends up forcing everyone around him, even those closest to him, to assume the posture of a slave.

This means the tyrant can’t trust anybody, fearing the actions of those in the position of slavery who would wish to be free. When his daughters grew up, Dionysius no longer trusted them with shaving him. What was unthinkable to a child was now presumably conceivable to an adult who had lived in the assumed posture of a slave for so long. Instead of allowing them to wield a blade any longer, Dionysius “contrived how they might burn off the hair of his head and beard with red-hot nutshells.”

Such comic details of the extent of Dionysius’ fears illustrate also how the political unfortunately intrudes into every corner of the private life of the tyrant. Cicero hilariously describes how the very bedroom of Dionysius is transformed into a fortress under siege, complete with a makeshift moat and drawbridge:

“And as to his two wives, Aristomache, his countrywoman, and Doris of Locris, he never visited them at night before everything had been well searched and examined. And as he had surrounded the place where his bed was with a broad ditch, and made a way over it with a wooden bridge, he drew that bridge over after shutting his bedchamber door.”

Not only that, but the sinister capriciousness of a tyrant can strike out and transform even times of sport and playfulness into a time for murder. Cicero describes how when Dionysius loved “to play at ball—for he delighted much in it—and had pulled off his clothes, he used to give his sword into the keeping of a young man whom he was very fond of.”

But notice how it is the harmless smile of the young man himself that sends Dionysius over the edge:

“One of his intimates said pleasantly, ‘You certainly trust your life with him’; and as the young man happened to smile at this, he ordered them both to be slain, the one for showing how he might be taken off, the other for approving of what had been said by smiling.”

Interestingly, in this episode Dionysius does not act in a premeditated way. He acts simply on the basis of an acquired disposition of character. Therefore, the self-knowledge it reveals to him haunts him for the rest of his life.

Cicero reports that in fact nothing disturbed him more. This is remarkable, given the many other violent acts the king must have been complicit in during his thirty-eight-year reign. But because this episode involves someone toward whom Dionysius felt friendly, the pain of the tyrant’s lack of friendship is most keenly felt. Cicero comments on how tormented was the tyrant Dionysius by his killing of this young man:

“He was so concerned at what he had done that nothing affected him more during his whole life; for he had slain one to whom he was extremely partial. Thus do weak men’s desires pull them different ways, and while they indulge one, they act counter to another.”

It seems, then, that the desire for maintaining tyrannical rule is profoundly at odds with the desire for love and friendship. For this reason, the life of the tyrant is particularly joyless. To illustrate this, Cicero tells us about how Dionysius had a flatterer in his court called Damocles. Damocles praised the wealth and power of Dionysius, telling him how no man was more fortunate than the king.

Dionysius realizes that this ridiculous flatterer has only the most superficial conception of what it means to possess absolute power. To the imagination of Damocles, absolute power means nothing but the opportunity for an unlimited indulgence of one’s own sensual desires. But such an opportunity is always accompanied by a never-ending fear of loss, as Dionysius proceeds to teach Damocles. Dionysius begins by making a most unusual offer:

“‘Have you an inclination,’ said he, ‘Damocles, as this kind of life pleases you, to have a taste of it yourself, and to make a trial of the good fortune that attends me?’ And when he said that he should like it extremely, Dionysius ordered him to be laid on a bed of gold with the most beautiful covering, embroidered and wrought with the most exquisite work, and he dressed out a great many sideboards with silver and embossed gold. He then ordered some youths, distinguished for their handsome persons, to wait at his table, and to observe his nod, in order to serve him with what he wanted.”

“There were ointments and garlands; perfumes were burned; tables provided with the most exquisite meats. Damocles thought himself very happy. In the midst of this apparatus, Dionysius ordered a bright sword to be let down from the ceiling, suspended by a single horse-hair, so as to hang over the head of that happy man. After which he neither cast his eye on those handsome waiters, nor on the well-wrought plate, nor touched any of the provisions: presently the garlands fell to pieces. At last he entreated the tyrant to give him leave to go, for that now he had no desire to be happy.”

From this, Damocles learned how trapped Dionysius felt by his possession of power. Cicero observes that even if Dionysius had decided “to return to justice, and restore his citizens their rights and privileges” then he would in effect be committing suicide. People would never let go of the grudges they held against him over his many acts of injustice. They could never let go, because Dionysius had no friends who were capable, for the sake of friendship, of granting such forgiveness.

As Cicero remarks, “Had he attempted to have returned to a right way of thinking, he must have endangered his life.” And thus we see how Dionysius is trapped by his possession of tyrannical power.

Such power leaves every tyrant unable to take even the best advice of the best advisors. Trapped by the possession of power, Dionysius is ambushed by his own worst impulses into doing the worst, like murdering a smiling friend at a sporting event who rejoices in a friend’s trust.

“What misery was it for him to be deprived of acquaintance, of company at his table, and of the freedom of conversation!” laments Cicero. “He debarred himself from all civil and polite conversation, and spent his life among fugitives, bondmen, and barbarians; for he was persuaded that no one could be his friend who was worthy of liberty, or had the least desire of being free.”

Plato is a friend, yes, but tyranny is the death of friendship. And so there is no hope of happiness for someone who chooses power over friendship. Moreover, as the life of Dionysius illustrates, this choice can be consolidated in small but repeated actions over many years until, finally, the victim of habit can never escape from a self-constructed empty life.

This was originally published with the same title in The Imaginative Conservative on March 17, 2016.