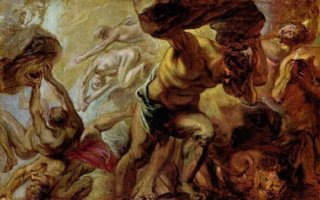 Plato gives an account in the ninth book of the Republic of how a tyrannical soul is formed. Socrates pauses and notes that, in order to proceed to with this investigation, we must “have adequately determined the nature and number of the appetites.” Otherwise, confusion will reign if these appetites are not first distinguished. Therefore, Socrates prepares the way for the inquiry by distinguishing reason, or the rational principle of the soul, from the irrational principles within the soul.

“But when a man’s pulse is healthy and temperate, and when before going to sleep he has awakened his rational powers, and fed them on noble thoughts and enquiries, collecting himself in meditation; after having first indulged his appetites neither too much nor too little, but just enough to lay them to sleep, and prevent them and their enjoyments and pains from interfering with the higher principle—which he leaves in the solitude of pure abstraction, free to contemplate and aspire to the knowledge of the unknown, whether in past, present, or future: when again he has allayed the passionate element, if he has a quarrel against any one—I say, when, after pacifying the two irrational principles, he rouses up the third, which is reason, before he takes his rest, then, as you know, he attains truth most nearly, and is least likely to be the sport of fantastic and lawless visions.” (Plato, Republic, translated by Benjamin Jowett)

It turns out that Socrates has already considered this aspect of our experience. In fact, Socrates goes on to note that “even in good men, there is a lawless wild-beast nature, which peers out in sleep.” In other words, the human experience of having bad dreams is shared by bad and good men alike. But if this is so, then what did Socrates mean by his earlier remarks, in which he raised the possibility of a rationally ordered soul not being at all subject to nightmarish visions?

The answer seems to lie in how Socrates goes on to consider how the “lawless wild-beast nature” is unleashed in the soul of a tyrannical man. Considering this man, we need not speak of the dreams of a tyrant. We need simply note that his life awake is a kind of a nightmare. For it is in this waking experience of a tyrant’s life that we may witness a man who has let his appetites run wild. Because his appetites are not rightly ordered according to reason, we may rightly say that to the extent to which his appetites are disordered and not subject to reason, the tyrant may be said to be—like a drunken man who is awake—to be not in his right mind:

“And when his other lusts, amid clouds of incense and perfumes and garlands and wines, and all the pleasures of a dissolute life, now let loose, come buzzing around him, nourishing to the utmost the sting of desire which they implant in his drone-like nature, then at last this lord of the soul, having Madness for the captain of his guard, breaks out into a frenzy: and if he finds in himself any good opinions or appetites in process of formation, and there is in him any sense of shame remaining, to these better principles he puts an end, and casts them forth until he has purged away temperance and brought in madness to the full.” (Plato, Republic)

The tyrannical man thus becomes the worst of all evildoers. This is because even the other evildoers, whatever their own forms of madness, “do not come within a thousand miles of the tyrant.” The way Socrates describes it seems to suggest that tyranny is a particularly vicious form of madness. But what is it that makes it the worst form?

The answer to this question lies in the role of the mob. It is a mob of lawless souls that enables the tyrant’s evil state of soul. Plato’s vivid way of stating suggestively how madness in a crowd enables further madness in a single soul would be this: it takes tyrannical souls to create a tyrant.

The idea is quite sophisticated from both a sociological and a psychological standpoint of analysis. Consider how Plato describes it using the mouth of Socrates to make the case: When a mob has itself descended into the mad state of soul that characterizes a tyrant soul, then they turn to a political tyrant to channel the insane passions of their own souls. As Socrates puts it, “when this noxious class and their followers grow numerous and become conscious of their strength, assisted by the infatuation of the people, they choose from among themselves the one who has most of the tyrant in his own soul, and him they create their tyrant.”

This is a most unflattering description. The worst of the mob of tyrannical souls is chosen as their leader. All of the souls in the mob may be quite disordered with regard to the various ways in which the individual irrational appetites are running wild without being adequately controlled by reason. But in a strange kind of inversion of the idea of good people seeking the best from among them, we have here the idea of bad people choosing the worst from among them to be their political leader.

What kind of madness can generate this sort of result? And is it even plausible to say that this is an accurate description of how human beings can behave? Yet it seems that Socrates is deadly earnest in examining this possibility. In fact, his analysis of the tyrannical soul is the culmination of his study of the degeneration of constitutional forms. In the final stage of degeneration, the degenerate citizens with tyrannically disordered souls, who behave lawlessly in the sense that they are observed to substitute a kind of madness in place of reason, select the most tyrannically disordered soul to lead them.

What kind of weird political entropy is this? Why would disordered souls hunger after a most disordered soul to channel the collective crowd energy of their banding together as a mob of madmen?

The point of Socrates’ observation of this sociological and psychological phenomenon seems to be that degeneration feeds on itself in a vicious cycle, worsening in such a way that the whole polity attains a final stage of decay by selecting an infernal exemplar of all the disordered individuals who now gather together to project their power en masse towards a political goal.

But the strange thing is that the delusional mass goal, for which the individually disordered souls collectively band together (because otherwise they would not be able to attain it individually), becomes definitively unattainable. The reason is that they have irrationally selected the most irrational from among them to serve as their collective representative in taking decisive action.

Yet this delusional goal is impossible precisely because any collective goal requires a rationally ordering principle. The many cannot be ordered to one goal, which is pursued collectively as a common good, unless reason is ordering the many to the one. Yet tyrannical souls by definition are incapable of ordering themselves in collective action towards a rational common good. The most that can be achieved is that the mob will use the collective projection of mass power to amplify the tyrannical desires of a single man from among them: moreover, the worst one.

Socrates observes the irony that results when then the tyrant individual’s most lawless soul is thus amplified to the greatest possible extent by the enabling power of the mob. Socrates notes the quintessential character of the tyrant:

“When such men are only private individuals and before they get power, this is their character; they associate entirely with their own flatterers or ready tools; or if they want anything from anybody, they in their turn are equally ready to bow down before them: they profess every sort of affection for them; but when they have gained their point they know them no more.”

The disordered souls of the tyrannical mob, in projecting their power through the individual tyrant that they select as their leader, will all suffer by being betrayed and disowned by the tyrant. And what more could be expected? For the mob approval of a tyrant can issue in nothing else save the irrational rule of the most disordered from among them.

The sad way of life of the ruling tyrants is memorably described by Plato: “They are always either the masters or servants and never the friends of anybody; the tyrant never tastes of true freedom or friendship.”

Such a man is most treacherous and most unjust. Thus we can see the point of Socrates’ earlier description of the dreams of the opposite of such a man. The perfect just and virtuous man will be perfectly just and virtuous even in his dreams.

Yet the tyrant, the worst of all men, is an inversion of this ideal in a most interesting way. The inversion is not that he is completely vicious, acting without virtue even in his dreams. That is no great achievement; because not only do bad men behave badly in their dreams, but also good men at times behave badly and lawlessly in their dreams.

Rather, the strange argument made earlier by Socrates seems to have been, in the end, a highly evocative way of suggesting how we are to understand the mob selection of a tyrant ruler. The tyrant’s enablement by the mob is best described as a living nightmare.

For it is a very special kind of nightmare. It is the worst of all nightmares. It is the nightmare collectively dreamed by the disordered souls of the mob that dreams up this individual as a representative of all their own worst aspects of soul.

The mob thinks that, just as in dreams, irrational wish fulfillment is possible even when awake, thanks to the collective power of their mass dreaming. But they are due for a rude awakening.

Such dreams of wish fulfillment are devoid of friendship and devoid of devotion to the common good. They are thus destined to end badly. The tyrant will turn on them all. And either they will wake up from the worst of all possible nightmares, or else they will simply be killed. In that case, they are murdered in the sleep of reason.

This was originally published with the same title in The Imaginative Conservative on March 30, 2016.