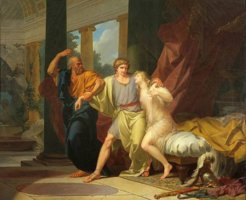 A recurring theme in Plato’s dialogues, including his Seventh Letter, describes the education of a young man who wants to achieve the highest things, which he considers to be achieved primarily through his ruling the polity. He wants to be a tyrant. This desire, he explains to others, means that he wants to “do good” and thereby receive high honors. The young man’s father or brother brings him to Athens to ask if Socrates might take the young man under his wing to prepare him for this worthy task.

Often, the young man is rich and quite handsome, though, in the case of Theages, he is sickly. This illness is what prevents him from achieving his goal—to his good fortune, as it turns out. Socrates, unlike most college professors, does not take a fee. He is sometimes offered emoluments, but this is what the Sophists receive. Socrates thus must first be “persuaded” or “convinced” that the young man is worth the effort. Socrates teaches that before a man can rule others, he has to rule himself. No mean feat.

The Sophists, perhaps unkindly, are considered the first college professors. They taught how to rule through eloquence alone. Socrates did not like Sophists. They were often quite famous celebrities. When they came to town, the potential philosophers, the aspiring youth of Athens, the sons of the existing rulers turned out to hear them.

The city’s best entertainment occurs when Socrates is provoked to debate these visiting dignitaries. The plot of many dialogues concerns the education of a young man who wants to rule but who has no idea what this ruling involves. Socrates does not see too much hope for most of them, though sometimes he gives it a try. They already have the want to rule.

The souls of the young men are already formed by their desires for fame, pleasure, or wealth. All you can do is save others from them. The first line of a city’s liberty begins here, in the souls of its best. Plato says, ominously, in his Seventh Letter: “We know that the requests of tyrants are mingled with compulsion.” The great tyrants arise in democracies, the Republic tells us. Those who want to rule are charming, handsome, and eloquent.

Of all these young men, Alcibiades is the most attractive and the most dangerous. In Alcibiades I, we read:

Socrates: “So it’s not walls or war-ships or shipyards that cities need, Alcibiades, if they are to prosper, nor is it numbers or size, without virtue.”
Alcibiades: “Definitely.”
Socrates: “So if you are to manage the city’s business properly and well, you impart virtue to the citizens.”
Alcibiades: “Of course.”
Socrates: “Is it possible to impart something you haven’t got?”
Alcibiades: “How could it be?”…
Socrates: “So what you need to get for yourself and for the city isn’t political power, nor the authority to do what you like, what you need is justice and self-control . . . When an individual or a city with no intelligence is at liberty to do what he or it wants, what do you think the likely result will be?”

We need some experience of politics to know what this result might be.

“You rascal! So you want to be a tyrant over us, and that’s why you criticized your father all along for refusing to send you to some tyrant-teacher.” On pressing the young man about the awful way these famous tyrants ruled, Theages backtracks. No, he does not want to imitate the “violence” of their rule. Rather, “I want to rule over those who voluntarily submit.” The kid sounds like he read Rousseau!

It turns out, though, that to rule over willing citizens, one must first become wise. He needs a teacher to teach him not about politics but about wisdom. Of course, the only way to learn such wisdom is to associate with Socrates.

Indeed, we might say that the first step in politics is to test one’s soul against the important things that are not political. Tyrants—intelligent, charming men as they usually are—rush into politics without first examining their souls. Politics without wisdom is not politics.

“We know that the requests of tyrants are mingled with compulsion.”

The modern experience of tyranny follows the idealism with repression that Plato describes. The modern notion of democracy becomes in practice the ancient notion of tyranny.

At the end of the Gorgias, Socrates says: “I believe that I am one of the few Athenians… to take up the true political craft and practice the true politics.” He could say that because he knew that his soul was made for something other than politics.

This was originally published with the same title in The Imaginative Conservative on April 8, 2017.