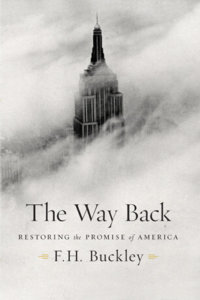 The cover of F.H. Buckley’s most recent book depicts the Empire State Building enshrouded in clouds. With only the iconic building’s antennae and pyramid in view it looks not unlike the prow of a ship about to sink below swirling waves. Taken alongside its title, The Way Back, this makes for a conflicted first impression, drawing together a promise of renewal and a picture of inundation. But this odd juxtaposition captures the contradictory nature of the work as a whole, a work which promises a remedy but delivers a jeremiad.

The Way Back is, like all lamentations, a work that hearkens back to an earlier and better time. Recalling America’s golden age Buckley calls upon its laureate Horatio Alger and his hero Ragged Dick. According to Buckley, Ragged Dick captures in pristine distillation the ethos and landscape of that lost land, a country characterized by industry, honesty and ambition, all leading inevitably to upward mobility. But Alger’s America was an all too brief variation from a nearly irresistible norm. The norm is stratified social immobility with a permanent aristocracy at its apex; according to Buckley inequality and immobility is nothing less than “the natural default position of any society” (10).

For Buckley this norm emerges out of the irrepressible interplay of nature and agency, in which natural difference generates social status which in turn reproduces itself in a manner increasingly independent of its origins. In this way a natural aristocracy becomes hereditary. As such, Buckley contends, we are both “hard-wired” for an aristocracy and yet at the same time it is a social order of our own choosing. The Way Back then is a book about human nature, human frailty and social decline; it examines a primordial urge and a social and a moral failing. To the first, Buckley insists that the urge to aristocracy is essentially genetic, captured in an intractable desire for advantage, not merely for ourselves but for our progeny. Drawing on experiments and surveys in both psychology and economics (95) Buckley contends that it is not enough that our children to do well, we want them to do better than others. This relative preference, where our desire is not merely to possess a thing but to possess a larger share, has slowly transformed the United States from, as Buckley puts it, the land of the free into “Legacy Nation,” a place characterized not by the rise of Ragged Dick but by inherited wealth, position and privilege.

The Way Back examines the road taken away from Alger’s America and the class that benefit most at journey’s end. In studying the path and proposing a route of return Buckley looks at three sources of stable social stratification: things we cannot change, things we can change somewhat and those which are fully available for remedy. In the first class he places technology, culture and nature. In the second he places relative preference, assortative socializing, and what Buckley calls “Red Toryism.”  In the last class he places a failing public education system, cronyism, over regulation and “rule by lawyers.”  In each of these sections Buckley adds his own insights to work, both in data collection and interpretation done by others. But what is original in his work, what distinguishes it in particular from that of scholars like Charles Murray and Nicholas Eberstadt, is a distinct insistence on agency, even to the point of suggesting a conspiracy on the part of the new aristocrats.

Ultimately the road back involves seizing the wheel from the new class of aristocrats. This new class is wholly a creature of relative preference. In occupying the institutions of education, government and law it invariably acts in its own interest. At the same time the new class, who Buckley credits with mouthing explicitly progressive pieties, undermines those who aspire to join their ranks. This task of exclusion is essential if politics and prosperity are understood in terms of relative preference. After all, according to relative preference the appeal of elitism is in the exclusivity as much as anything else. How then, in an ostensibly democratic country, does an aristocratic faction succeed in both establishing themselves and securing the future for their progeny?  For Buckley the answer is a terrible bargain made between the aristocracy and the lumpenproletariat.  That bargain, which masquerades as an ideology well into its second century, is Red Toryism. And that bargain, more than technology, culture, public policy or human nature, is what keeps America from finding its way home.

Red Tories, as Buckley acknowledges, are traditionally found within the Canadian and British Conservative parties. Conventional definitions of Red Toryism usually include a suspicion of classical liberalism rooted in noblesse oblige, a communitarian sensibility and an extended sympathy for the role of the welfare state. To Buckley this is all a disguise. From its very beginnings Red Toryism has been a strategy and not an ideology. Red Toryism, Buckley declares, originated in the Machiavellian mind of Benjamin Disraeli as a corrosive coalition of the new aristocracy with the underclass. In an attempt to oust Peel, thwart the rising middle class and seize the Conservative party Disraeli manufactured an ideology to justify a classic act of political triangulation. Tying the interests of the Upper and Lower Classes together Red Toryism built an ideological and institutional alliance that has Ragged Dick surrounded.

There is so much that is debatable and even more that is dismaying about Buckley’s description. At its root is the insistence that Red Toryism is a purely strategic phenomena. That it is rooted not in a compelling understanding of modernity but in a pressing interest. Understood in these terms Red Toryism emerged in America, as in Britain, out of the predilection for relative preference. Red Toryism, as Buckley understands it, owes more to original sin than political philosophy. The Red Tories of America, he makes clear, duped the poor with promises of a New Deal and the Great Society, all the while conspiring to construct Legacy Nation. Ensconced in government, the legal system and education Red Tories partnered with the underclass in opposing policies from school choice to deregulation that might free the middle classes to rise

Here Buckley is covering ground first and most successfully covered by Charles Murray in Losing Ground. Thirty years on what Buckley has added is motive. The new aristocrats filled with the ceaseless malice of relative preference dupe a slow witted underclass  who are all too willing to “tug the forelock and support Red Tory policies that do little to better its lives.”(193) Buckley paints a picture of co-opted groups, most especially the NAACP, who reject not only the entrepreneurial spirit of Booker T. Washington but the emancipatory legacy of Abraham Lincoln. To what end? Buckley suggests “The NAACP is given something in return for its servitude, in the form of better welfare benefits perhaps” (196). The comparison with Murray is stark, the central thesis of Losing Ground was that the poor, most especially impoverished African-Americans, made rational short term choices given the policy environment that had disastrous long term consequences. Three decades later, in the equally acclaimed Coming Apart, Murray examined  the unintended consequences of both social change and public policy to explain the plight of the underclass. Murray never suggested that Belmont intended to keep Fishtown poor, let alone to construct a Belmont-Fishtown Pact against middle America. Where Murray sees a tragedy Buckley sees a conspiracy.

It is this question of intention, of agency and even conspiracy which sets The Way Back apart. It also explains why the list of maladies is so long and the prescription so short. The concrete proposals, what Buckley calls his “wish list,” comprise barely a dozen pages. Here, in its brevity, Buckley reveals and ultimately revels in the true nature of what he has written. The Way Back presents almost three hundred pages of social science but it ends in moral outrage. It ends as manifesto and in echoing themes developed more fully in his previous book, The Once and Future King. Buckley condemns not merely the new aristocrats but the system that allowed them to seize control. The new aristocrats only emerge when relative preference finds itself in an America that “is too big, and [where] it’s also too hard to undo bad laws and assemble a coalition behind national interests “ (286). Notice that this places the new class, along with their unwitting allies in the underclass, in the position of proposing policies of only partial and specific benefit. In Aristotelian terms the new class is not an aristocracy but a monstrous hybrid oligarchy. Buckley makes this clear in his final and literal call to arms. Completing the text’s transformation from sober study into call to arms, Buckley invokes Shelley’s condemnation of aristocratic oppression in The Mask of Anarchy, declaring “Ye Are Many-They Are Few” (288).

These are intemperate words, perhaps suited to an ill-tempered time. They lack any assumption of good faith on the part of the Belmont/Fishtown alliance.  The new aristocrats are not wrong, they are wicked. It is a distinctly dystopian vision of politics, reduced to the most extreme form of relative preference, to the literal conclusion that it is us versus them. It explains his call, early in the book, for a savior, a new sort of politician, “a more rambunctious set of outsiders who communicate through their brashness, their rudeness, their belief that we are in crisis. To their more polite critics they say: We are not so nice as you!” (5).  This may be the way back to economic and social mobility, but it comes at the cost of the essential assumptions we make about those we disagree with.  It is those assumptions that constitute the true politeness of the democratic polity and that remain the best path out of the present discontents.

Georffrey Kellow is an Associate Professor of Humanities specializing in the History of Ideas in the College of the Humanities at Carleton University. His research focuses on the philosophical and intellectual origins of market society, particularly in the work of Adam Smith and Benjamin Franklin.

The Performative Contradictions of Liberalism

Crisis in Liberal Education and Liberal Democracy: A Canadian Perspective

God: An Autobiography as Told to a Philosopher