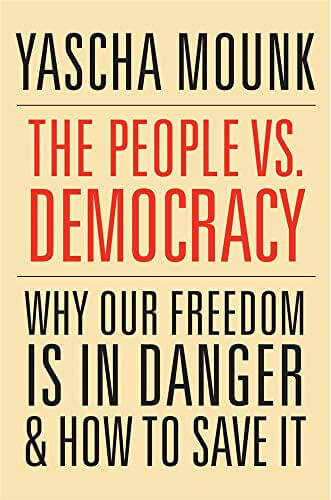 The People vs. Democracy: Why Our Freedom is in Danger and How to Save It. Yascha Mounk. Harvard University Press, 2019.

The wave of right-wing nationalism around the world has been a reckoning for pundits of all stripes, who assumed that progress had become inevitable and that history had somehow ended. This time should be a boon for political philosophers and theorists who understand the nuances and complications related to liberalism and democracy.

The German-born associate professor of the practice of international affairs at Johns Hopkins University earned his doctorate in government from Harvard. If you don’t know Mounk from his previous books The Age of Responsibility: Luck, Choice and the Welfare State (2017) or Stranger in My Own Country: A Jewish Family in Modern Germany (2015); you might know him from his appearances on NPR, CNN, or MSNBC; his podcast (The Good Fight); his weekly column for Slate; or his pieces in The New Yorker, Foreign Affairs, or The Atlantic, where he is a contributing writer. He might not sleep.

The People vs. Democracy—a great title, if there ever was one—is among the first wave of books that attempts to make sense of the last several years. It has already been translated into 11 languages and, based on its blurbs and its press, seems to be in the rarified air of theory books that have found a real audience. In it, Mounk aims to understand the origins of the rise of populism around the globe and offer remedies for how to rescue freedom (freedom!) from its clutches.

The book has three parts, each of which contains three chapters. The first part, “The Crisis of Liberal Democracy,” focuses on Mounk’s diagnosis of how liberal democracy goes wrong—losing its focus on individual rights, losing respect for democratic procedures, or losing respect for and trust in its institutions.

There are a few issues with Mounk’s point of departure: “Liberalism and democracy, we have long thought, make a coherent whole,” he begins (6). It’s not immediately clear whom he means by “we” or what he means by “long.” But the problem, we are told, can be traced all the way back to the imprecision of Robert Dahl, a political scientist who was evidently so powerful and so wise, he could use his books to create a too-simplistic understanding of democracy. Mounk is clearer later in the book, when he identifies “most citizens…and many scholars” in the post-war world as the problem (97), an adjustment that’s either sloppy, at best, or pretty sneaky.

Moreover, it’s not exactly clear that Mounk has ever read Dahl. Rather than citing the author himself, Mounk takes as authoritative a passage from Competitive Authoritarianism, a 2010 book by Steven Levitsky and Lucan Way. This book, “following Dahl” lists the elements of democracy from 1971’s Polyarchy. Yet Who Governs?, Dahl’s first book, published in 1961, a case study of power structures in New Haven, Connecticut, which took as its research question whether economic elites created policy—or what Mounk calls “rights without democracy.” Mounk is right to suggest that (pace Orwell and Strauss) we have blurred the empirical and normative language around democracy, that we are inclined to confuse facts for values and are unable to exercise proper or adequate judgments about political life. But his decision to limit his survey of political science and theory to Dahl is curious, to say the least.

Elsewhere, Mounk corrects himself a bit, when he argues that “virtually all existing definitions of democracy don’t bother to distinguish between three different beasts: liberalism, democracy, and the historically contingent set of institutions to which we have become accustomed in North America and Western Europe” (26). There’s a lot of life crawling around under that “virtually” rock, if Mounk would care to lift it. In general, Mounk doesn’t provide (or care to borrow) clear and precise definitions of what he means by the concepts he uses to frame his study: democracy, liberalism, populism, conservatism, citizenship, freedom, rights all could use a bit more development.

Despite Mounk’s suggestions to the contrary, the book’s thesis, that liberalism and democracy are not two sides of the same coin, is hardly original. Mounk’s “democracy without rights,” or the idea that popular decisions could come at the expense of the liberties of others, is another name for what Madison called “tyranny of the majority.” The single most infuriating part of Mounk’s book comes in the final pages of the first part, where he is concluding his treatment on the crisis of liberal democracy by explaining that equality and freedom do not always go hand in hand. He does so without including any mention of Tocqueville or his Democracy in America, essential reading for anyone who cares to understand the theory or practice of democratic political culture. When he’s next on his show, perhaps Mounk could ask Fareed Zakaria about The Future of Freedom: Illiberal Democracy at Home and Abroad, the host’s very fine 2004 book, which covers much of the same ground.

Tocqueville is not the only thinker who gets Mounked. Plato, Aristotle, Machiavelli, and Rousseau appear only as extras and without any speaking parts. In the role of conservative, Mounk casts not Edmund Burke, who had some things to say about the practice of democracy and rights, but David Brooks. Then again, what should we expect from a man who wrote an entire book on economics and individualism (The Age of Responsibility) without mentioning Adam Smith. Ahem.

Mounk tends to treat “political scientists” like the Borg, who think and move as one collective, which is why the Reader’s Digest version of Dahl can play such a pivotal role. There’s plenty to lament about the state of the discipline, and it’s certainly true that its obsession with empiricism has done little to anticipate (much less counter) the rise of nationalism and irrationalism around the world. But Mounk blames with too broad of a brush, and his straw men and women are often left uncited, which makes his line of thought difficult to follow or verify. As a result, I found myself in the strange position of doubting the accuracy of his accounts, even going so far as reviewing many of the sources he used. If he’s leaving out key thinkers and simplifying arguments of others in order to establish the originality or merit of his argument, where else might he be working a sleight of hand that’s less obvious? It’s tough for a reader to know.

The second part of the book turns to what Mounk sees as the origins of the problem, with chapters on social media, economic stagnation, and identity, which don’t break any new ground or, thankfully, claim to. Social media, he explains, has made us more connected and helped to grow the economy, but it has also helped to spread conspiracy theories and provided platforms for extremists, but only because, in his view, our moral foundations have been so corroded. Economic anxiety, he explains, is a wicked problem because it’s largely future-oriented but also because it comes at an odd moment in history, in the wake of real economic development. Identity plays a part insofar as demographic shifts, real and imagined, have brought with them very-real resentment.

The book concludes with a series of recommendations to right the wrongs that have been chronicled. To stem the tide of rising nationalism, Mounk argues for three broad remedies—although, given the thinness of his lit review, I’m not sure how much weight they should be given. The first requires that we need to provide citizens with a positive view of our country, an “inclusive patriotism,” that’s more than mere rhetoric and is supported by real policies that treat citizens all the same and make room for a sensible immigration policy. The second focuses on providing citizens with economic security and a sense of optimism about the future—with a fairer and more modern tax policy; an increase in available housing; more labor productivity, which will mean better wages; an adequate welfare state, which separates benefits from employment; and more meaningful work.

To renew our civic faith, Mounk’s third plank, we need to focus on educating young people as future citizens. At present, students are not learning the virtues of liberal democracy, so much as they are learning where the country has fallen short, Mounk laments—“[e]specially in the humanities and more politicized fields in the social sciences.” It’s a somewhat surprising take that has a whiff of “bothsidesism” to it since it’s out of place with his otherwise consistent progressivism. It also seems out a place in a time in which nihilism has found a more comfortable home on the other side of the aisle.

Mounk also uses the section on education to speak about his own experience, which might explain some of the shortcomings of the book. “When I arrived at Harvard University to pursue a PhD in political science, I was prepared to immerse myself in history and in theory, in intricate questions about how the world is and how it should be,” he writes; “What I was not prepared for was the extent to which graduate school would discourage me from using my training in these abstract questions for more concrete or pedagogical ends.” (246). Poor Yascha! Evidently, all of Harvey Mansfield’s classes must have been full.

The book’s final pages must have been written in one of those moments early in the Trump presidency when there was the possibility that Trump was not seen as an ignorant sociopath or that the members of his party might actually have a sense of loyalty to the country and the Constitution and do the right thing by either removing him or checking him in a serious way. (Those were good times.) Mounk ends on a bit of a hopeful note, that the United States might not go the way of the Roman Republic, with which he sees many parallels. Of course, our largely failed-state response to the coronavirus pandemic has hardly been encouraging.

While promising in its aim and scope, The People vs. Democracy doesn’t accomplish much, except maybe as a piece of comparative journalism. The book is neither sufficiently normative or empirical to have any great or lasting value. I began almost jealous for the attention Mounk has received—keeping his website current could be a full-time job—but came away slightly annoyed at the platforms he has and the opportunity he has squandered to contribute something more substantive and meaningful to the discourse.

There are many fine theorists, ancient, modern, and academic, who have done the hard work of thinking through ways to advance and maintain the norms and institutions of liberal democracy. Skip this book, and go read one of them.

Steven Michels is a Professor of Political Science at Sacred Heart University in Connecticut. He is author of The Case against Democracy (Praeger, 2013) and Sinclair Lewis and American Democracy (Lexington Books, 2017).