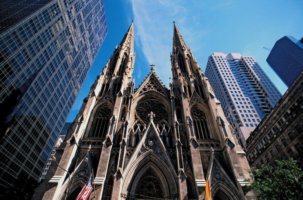 To begin with a simple point, one basic insight of Tocqueville is that things are always getting better and worse. Thus, it is hardly surprising that Tocqueville could be used to defend the advantages of religious establishment. He, more generally, is unrivaled in arousing a kind of selective nostalgia that helps us remember the advantages of aristocracy. He says, in Democracy in America’s conclusion, that aristocracy is better in cultivating great individuality, and, as a partisan of greatness himself, he’s chilled when he thinks about how little room there will be for men such as himself in a democracy. Democracy, however, is more just. Tocqueville takes the Creator’s view, and not his own, by preferring democratic justice to aristocratic greatness. His tasks are to make democracy as compatible with greatness as possible, and to see greatness in democracy.

Tocqueville says modern democracy is, in fact, Christian in inspiration. What Aristotle and Plato taught was, in the crucial respect, untrue:

“The most profound and vast geniuses of Rome and Greece were never able to arrive at the idea, so general but at the same time so simple, of the similarity of men and of the equal right of freedom that each bears from birth; and they did the utmost to prove that slavery was natural and would also exist . . . All the great writers of antiquity were part of the aristocracy of masters, . . . and it was necessary that Jesus Christ come to earth to make it understood that all members of the human species are naturally alike and equal.”

There’s a lot here opposed to the Aristotelian idea that it’s the function of the state (or city) to inculcate a higher or spiritual/aristocratic understanding of moral virtue in people. The classical view was that all human beings—except perhaps the rare philosopher—are stuck in the natural slavery of the “cave” or the political order. But the truth taught by Jesus—the truth about persons—is that all creatures made in God’s image have “the equal right of freedom” from some comprehensive civil theology or even from some established or politicized church.

Tocqueville almost begins Democracy with a judicious appraisal of a Christian heresy that was the basis of the first American founding. The Puritans, he explained, were educated political idealists who founded a real and unprecedented democratic country that was less distorted by political prejudice than even Plato’s city in speech. They were all about egalitarian political participation and the education of everyone as beings with souls. Their egalitarian idealism was admirable and remains an indispensable feature in elevating our democracy above individualistic self-concern. But the Puritans erred by criminalizing every sin, using Exodus, Leviticus, and Deuteronomy as the foundation for civil legislation, and for intrusively offending the right to freedom of conscience. There’s nothing about the teaching of Jesus, Tocqueville claims, that could justify making political life that comprehensive for religious reasons.

Not only that, religion can be effective in America only insofar as it stands apart from the general tendency of democratic development. The Americans, Tocqueville explains, are Cartesians without ever having read a word of Descartes. That’s because the democratic method is grounded in the same principle as the Cartesian one—doubt. It’s the doubt of personal authority that frees the democratic mind for self-determination. It’s an offense against my egalitarian freedom to allow priests, parents, politicians, and so forth to rule me by privileging what they think. But the problem with this assertion of personal pride is that it points in a direction of a more overwhelming personal weakness. It’s true that no one is better than me, but I’m no better than anyone else. That means I have no point of view by which to resist public opinion or the other impersonal forces—such as pop science, history, technology, and so forth—that surround me. So American freedom leads, finally, to the apathetic passivity of what Tocqueville calls the heart disease of individualism, of being emotionally locked up in the tiny world of your puny self.

But the Americans, Tocqueville reports, exempt religion from their habitual doubt. Their view is that they need some dogma to exercise their political freedom well, to have the confidence to think and act well. That creates space for religion to perpetuate what’s true about aristocracy: Human beings are distinguished by their souls, and each of us by taking his or her singular and immortal personal moral destiny seriously. That’s what Americans, Tocqueville reports, hear in church on Sunday. It was in Tocqueville’s time as it is in ours that the observantly religious Americans have a countercultural confidence that insulates them from democracy’s degrading excesses. It’s our religious observant Americans, after all, who can extend their hearts enough to have babies enough that the global “birth dearth” displays itself much more gently in our country.

The democratic truth is that we’re all created equal, but truth, by itself, easily morphs into apathetic passivity and material self-indulgence. The aristocratic truth is that to be human is to have a singular greatness (and misery) not shared with the other animals. The Christian truth is that all men were equally created to display the greatness of unique and irreplaceable individuality, and part of that greatness is the truth about who we are that we can joyfully and responsibly share in common. The danger in democracy is that Christian churches lose their capacity to be genuinely countercultural—or teach the truth that will be neglected “on the street” in middle-class democracy. And so the separation of church and state is to keep the church from being corrupted by excessive concern with endlessly egalitarian justice and the logic of the market. The separation is for the integrity of the church by limiting the claims for truth and morality of the democratic “social state,” which includes the democratic state.

But it’s both futile and even un-Christian to think that there could be, in the modern world, a state that favors or properly appreciates the church. Orestes Brownson, the greatest American Catholic thinker ever, said all the church should need and want from America is freedom to pursue its evangelical mission. That means, of course, that Americans should understand political freedom to be freedom for the church, for an organized body of thought and action. And we can see that the church flourished in America in the relative absence of politicized intrusion or corruption for a very long time.

The danger now, as always, is that the individualistic yet highly judgmental democracy—our creeping and creepy mixture of progressivism and libertarianism—will seek to impose its standards on our countercultural churches. Tocqueville was alive—although maybe not alive enough—to that danger. Who can deny that that the danger is greater now than ever? Today’s issues, Tocqueville would probably say, have their origins in the surrender of our contemplative Sunday to commerce and “seventh-day recreationalists.”

But anyone who thinks today’s remedy would be an established church would do well to remember how the establishments in Spain, Ireland, and Quebec worked out, the hyper-secularist and sometimes nihilistic countermovements in the name of democracy they generated. Those attempts to wield fundamental political influence produced clericalism and a kind of intrusiveness we Americans associate with the Puritans. The film Philomena is distorted by a kind of fanatical anti-Catholic ire, but, peel away that unfairly self-righteous anger, and we still see evidence of a Puritanical Irish church and society not particularly solicitous of the equal rights of person—include mothers wed or unwed—to liberty.

This was originally published with the same title in The Imaginative Conservative on January 16, 2014.

The Witches of Macbeth: A Weyward Translation