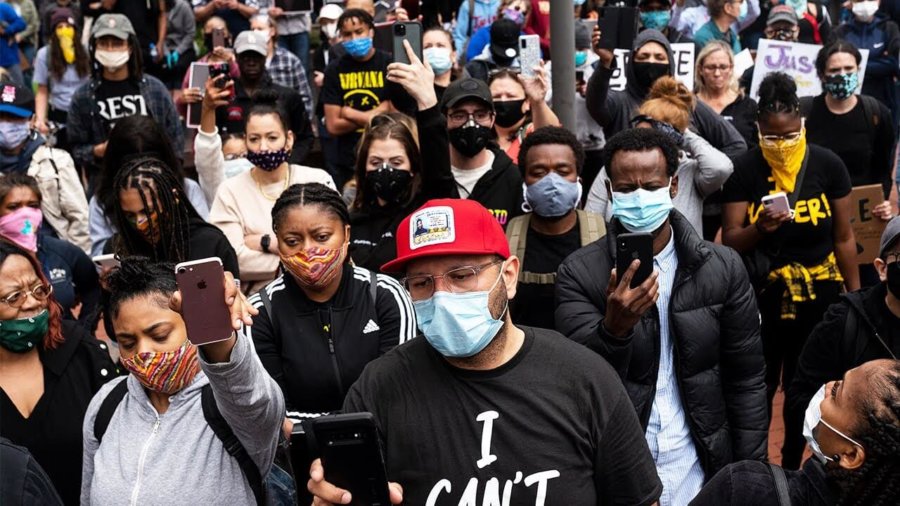 2020 has been marked by the vivid resurgence of an ancient, fundamental disjuncture, even a conflict, between two discourses: one of love or desire for the Good, the other of irrational fear instilled by tyrants.  The opposition between these two ancestral, even paradigmatic discourses has been radicalized around the covid-19 question.

Two fronts have arisen, of which one is by far dominant.  On account of the dominant discourse, the opponent is completely wrong and should be banned in arguing, or even only suggesting that the official covid-19 discourse has been uniformly orchestrated by a global-mass-media network that has systematically attacked all opposition to it, in the best cases ostracizing critics, in the worst and more usual cases, condemning and demonizing them.  (Somewhere in the middle would come the strategy of feigned condescendence.)  In any case, criticism of the dominant global discourse would have been systematically dismissed as insane.  The term “conspiracy theory” sets the standard—a red herring poorly concealing deep-seated fear among the global establishment of losing its stronghold on the psyche of world populations.

The heralds of the dominant opinion respond to their critics by condemning and demonizing them: no sooner has a spokesperson of the opposition doubted the universal benefit of globalist restrictions and obligations (not least of them that of mask-wearing in public) than he becomes a despicable bigot, insane negator of true science and finally a threat to humanity as a whole (medical doctors may be even arrested as terrorists for having publicly questioned the rationale of the dominant discourse).  Thus it is that an irony emerges: the official discourse condemns its opposition for claiming to have been condemned by the official discourse.  Is there not something deeply ironic about a dominant discourse that condemns its opposition for accusing the dominant discourse of condemning its opposition?

Scratching, however slightly, beneath the surface of the dominant discourse we find presuppositions denying the very legitimacy of our scratching.  For underlying the dominant discourse stands a firmly progressive vision of humanity and its ends, dismissing any non-progressive life orientation at best as irrelevant “philosophizing,” at worst as radical evil (to echo a Kantian expression).  To look forward with utmost seriousness, to turn to the future as consummate Mecca, makes sense only where the past has been unmasked as devoid of permanent meaning—only where there is no standard of right and wrong independent of our struggle to create our own future.  Thereupon, the struggle, what in Hitler’s German reads as kampf, becomes the standard.  Any turning back appears as a betrayal.  There is no turning back to the God of our fathers, who is as dead as they are; and there is no turning back to nature, since the only nature that deserves mention is the environmentalist’s res extensa fueling our creativity, as we all join arms to produce an unprecedented future, a world ultimately grounded in our collective power (what in Jung appears as collective unconscious).

The progressive view necessarily unfolds as a universal or universalist view that does not want anyone or anything “left behind”.  We have no right to stay behind or to resist being included, engulfed, swallowed whole; and since lagging behind is necessary for any genuine doubt, all doubt must be frowned upon as sign of blind “selfishness,” unless doubt serves, in self-contradictory fashion, as a means to discredit all “backward” outlook.  Thus, it is perfectly acceptable to be skeptical about any deed, or even simply any argument that might deflate the sense of urgency characterizing the dominant call to secure universal health at all costs, or rather especially where the demands for survival imply the sacrifice of freedom.  Appeals to the primacy of freedom over health, or shall we say of soul over body, may be even preemptively despised as irresponsible, capricious, if not outrightly pernicious.  In any case, doubts concerning the authority of official “experts” over our everyday lives are to be shunned in favor of doubt about all doubting of the regime of expertise.  The only legitimate, indeed welcome, doubt is a suicidal doubt extinguishing all doubt, a doubt expressed for the sake of a future new life of doubt-free universal collaboration.  Such is the life in which, to echo Joseph Stalin’s rhetoric, everything is alright because authority is no longer being doubted.

Pressed by the need to smother all resistance to its progressive drive, the new global discourse is compelled to turn to the past; the globalist reinterpretation of the past is an essential element of the project of neutralizing any allure the past may hold for “the opposition”.  The new global discourse cannot afford to simply forsake the past; it must rather appropriate it as that which must negate itself for the sake of propelling us forward.  The “official” past, in particular, must destroy itself, and we may turn back to it only in the act of signaling its demise, whether the act be carried out by mobs toppling public statues, or by academic ideologues preaching that history is written by winners, with the implication that it should be rewritten by losers.  The new “history” is born of resentment; it calls for empowerment, the “new truth” supplanting most notably a Biblical truth beyond all thirst for power.  All that is given “in advance,” all that does not require empowerment precisely because it is a gift presupposed by all power—by our very freedom—appears highly suspect as what can be no better than a foolish distraction from all that really counts.

What in Biblical terms constitutes a sharp rejection of the God of our fathers in favor of an idolatrous submission to the idea of power (such is Dagon for the Book’s Philistines) necessarily demands a price of us, namely fear of our failing to secure a future that depends, not upon any original Alpha, but upon our power to convert “the given” into an expression of our own power.  Thus is the discourse of empowerment bound ineluctably to that of fear.  There can be no Babel without fear of an impending catastrophe.  For what counts the most, now, is not a life safely rooted in an original Good, but survival uprooted from anything worth being grateful for.

On the stage of the presently dominant discourse of fear, the high status that gratitude holds for our classical “patriarchal” tradition (both Biblical and Platonic) is taken up by self-importance, self-affirmation, or forward-looking “pride,” pride asserted as a virtual end in itself.

The essential orientation of the discourse of fear dominating our times should not distract us from itself into believing that its weapons—the “evidence” it summons to confirm its authority—are separable from the ideas making use of them.  The real battle is not between opinions, or between one set of data and another, between one expert and another, but between underlying guiding ideas.  That is why, here, I have tackled the question of the Covid-19 in a non-technical manner.  This is not to say that “numbers” should not count, but that as things stand, for “the opposition” the main problem is not given by numbers, or by “data” that the dominant discourse uses to justify innovative globalist social policies; the cardinal problem is the ideas determining the manner in which data is selected, gathered, interpreted, defined.  As long as we do not confront this underlying problem in full consciousness of its primacy with respect to all “technical” issues, we shall not have freed ourselves from the straightjacket of a false dichotomy, the one between tribal particularism and imperialistic universalism, between the tyranny of the old and the tyranny of the new.

Marco Andreacchio was awarded a doctorate from the University of IIllinois for his interpretation of Sino-Japanese philosophical classics in dialogue with Western counterparts and a doctorate from Cambridge University for his work on Dante’s Platonic interpretation of religious authority. Andreacchio has taught at various higher education institutions and published systematically on problems of a political-philosophical nature.