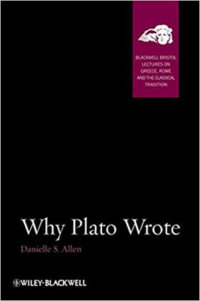 As part of the Blackwell Bristol Lectures Series on Greece, Rome, and the Classical Tradition, Danielle S. Allen has produced an extraordinary book that not only offers an answer to the title question of her book, Why Plato Wrote, but also examines the nature of philosophical writing, the relationship between philosophy and politics, and how one should approach classical studies, history, and political theory. For Allen, Plato is both a metaphysician and a pragmatist in the sense that one can achieve truth both in philosophy and politics. Although politics is inferior to metaphysics in the pursuit of truth, Plato did recognize that he needed an additional method of ascertaining the truth content of beliefs in order effect social action. He therefore wrote both as a philosopher and as a pragmatic political operative in the hope of influencing the political language of Athens with his philosophical ideas and thereby changing the political convictions of its citizens.

Through his public lectures and his writing, Plato’s philosophical ideas became disseminated and eventually adopted by politicians in their own political language. Although Plato recognized that these philosophical ideas could not be transmitted unchanged and unadapted to the public, he was aware that he could at least increase the likelihood that his ideas would be adopted by the public; and the more likely to be adopted these ideas were, the more likely it was that they would circulate among the public and influence political discourse. Furthermore, as more of his ideas became part of Athenian political discourse, so there would be a greater chance that these ideas would be linked with one another metaphorically and thereby not deviate much from the author’s original intention. Thus, for Allen, Plato was a successful linguistic entrepreneur who understood the central role that language plays in the structure of our lives and consequently sought to effect social and political change by influencing the ideology of language itself with his philosophical concepts.

In the first chapter, Allen outlines this migration of Plato’s philosophical concepts to politics, revealing to us the process by which intellectuals’ ideas come to shape a community’s values. Although ideas are one force among many in the shaping of a community’s values, these ideas can and do have an impact upon political language, ideology, and policy. As Allen demonstrates in her analysis of political speeches, Plato’s public lectures and the traveling of his works among elite and some non-elite Athenians affected the ideological vocabulary of the political debates during and after Plato’s own life. This migration of philosophical concepts into politics follows a pattern where first the relevant terms are created by Plato and Aristotle but remain unused by others. Next these philosophical concepts enter into the political discourse slowly and selectively. Finally, some politicians begin to adopt a philosophical vocabulary wholeheartedly, while others actively resist the Platonic vocabulary.

Of course, this pattern is complicated by Plato’s own writings where both arguments for and against philosophical writings can be uncovered, particularly in the Phaedrus and the Republic. Allen seeks to overcome this problem by testing whether Plato’s influence in political discourse aligns with his theory about what types of philosophical writing are acceptable and can influence political language. In chapters 2-4, Allen examines these arguments with most of the focus on the arguments in favor of philosophical writing. Underlying these arguments is the guiding principle that leaving people with a false ethical concept, when one has the power to correct them, is to cause them harm. Since one should cause no harm, the philosopher, if it is within his power to convey true concepts, should do so not only to the intellectually-gifted but also to the intellectually weak. Although oral dialectic may be appropriate for the intellectually able, the philosopher can assist the unlearned through his writing, with the understanding that it does not have the same force and quality as inheres in dialectic.

Perhaps no greater demonstration of the philosopher leaving writing to help the intellectually weak is Socrates’ creation of symbols in the Republic: the political images of the two ideal cities; the ethical portrayals of the types of men with their corresponding regimes; the psychological association of various animals with parts of the soul; and the epistemological pictures of the sun, the line, and the cave. These symbols serve a sociological, psychological, and epistemological function for the regime in creating durable cultural products that can impact abstract concepts in human minds through their reading of those objects. That is, Socrates’ symbols are constructed to engage the cognitive capacity of thought by starting with concrete images that hopefully will lead to abstract philosophical thought. By using symbols, the student will experience “reading” those objects as a sense of discovery and will remember these symbols as they become full-fledged beliefs and internalized to govern action.

But Plato knew that not all citizens could become philosophers, therefore, some symbols had to be constructed to persuade people to act as if they had in fact cognized metaphysically valid truth. Those citizens who do not have access to the truth but who believe in a noble lie will act justly accordingly to Plato’s definition of justice, while those who do have access to the truth beneath the noble lie will similarly act justly because they are philosophers. Without oral dialectic, the philosopher through his writing can reach the whole citizenry. The justification for the noble lie consequently is similar to the argument for philosophical writing in that both are permitted by Plato on the pragmatic grounds of a good outcome. However, this pragmatism is neither experiential nor utilitarian but metaphysical: whether the writing is true matters less than whether it will lead people to ethical beliefs and actions.

If Plato did want to implant cultural and political change in Athens, then why did he write dialogues instead of essays? In chapter five, Allen argues that Plato’s dialogues were to displace the poets’ place in Athenian culture, with the expectation that this cultural displacement would have political effects. By evaluating Plato’s dialogues against the literary standards set by Socrates in the Republic, Allen shows that the dialogues were an acceptable type of poetics for Plato and were intended to dislodge the poets’ role in Athenian culture. The relationship between Plato’s philosophy and politics therefore is one of political engagement, as revealed in Allen’s analysis of The Seventh Letter in chapter six. The dialogues were neither utopian blueprints nor pedagogical tools but rather “unacknowledged legislation” that sought to engage the public politically and reorient citizens towards Platonic ideals.

In the second part of the book, Allen provides the empirical evidence to make her case. In chapter seven, Allen traces the genealogy of terms, like prohairesis and kalliston, from Plato to the political speeches given between 345-307 BCE to show the influence of Platonic ideas on political debates. While these political speeches show traces of Platonic influence, they also reveal a broader culture war where coherent alternative conceptual visions gained argumentative traction at the core of Athenian politics. These visions were derived from philosophy, and particularly from Plato’s along with some significant contributions from Aristotle. With his philosophical concepts seeping into political discourse, Allen’s Plato therefore is responsible for launching the culture war that affected fourth-century Athens.

This culture war started in the 350s with different answers for how to reinvigorate the Athenian spirit of an earlier era and spilled over into battles over financial organization, military readiness, the role of the Areopagus, relations with Macedon, and other public policy matters. By analyzing the political speeches of Demosthenes, Aeschines, and Lycurgus in chapters eight and nine, Allen demonstrates how Platonic ideas have entered into the political debates about the Peace of Philocrates, the Sparta uprising, and the prosecutions of Leocrates and Ctseiphon. Specifically, Allen shows how Platonism ultimately became associated with oligarchy in political discourse, although some politicians, like Aeschines, argued that Platonism was compatible with democracy. But it was after Athens defeat by Macedon that Platonic concepts actually became realized in the city’s new political institutions, like the nomophulakes which were installed by Demetrius of Phaleron in 317.

Allen concludes with an epilogue that argues for her model of pragmatism in tracing the relations between ideas and events in the disciplines of classical studies, history, and political theory. This pragmatic model recognizes that beliefs are rules for action which can explain the nature and changes in political language; and ideas need to be understood in the form of their practical realities. By tracking the changes of new principles of action in institutions or in political alliances, one can follow the conversion of ideas into principles and rules of action. In her study of Plato, Allen illustrates how this approach can work in showing how written philosophical concepts can effect politics by means other than the immediate personal education of elites.

Why Plato Wrote makes a substantial contribution to our understanding of Plato as a political philosopher who acts as an “unacknowledged legislator” for Athenian politics. Allen demonstrates that philosophy at its core is a political activity in the shaping of concepts that act as principles and rules for action and the formation of a community’s values. Whether these concepts are implanted in students through dialectic or in the broader public in writing, the philosopher affects the entire polity in their contestation over values, norms, and interests. This pragmatic model not only yields a deeper understanding of Platonic philosophy, but it also provides new insights in our understanding of the nature of philosophical writing itself and its relationship to politics.

The Perspective of Liminality

A Return to Natural Rights Jurisprudence?