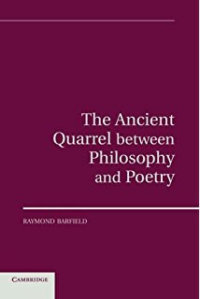 
From its beginnings, philosophy’s language, concepts, and imaginative growth have been heavily influenced by poetry. Drawing upon the works of a wide range of thinkers throughout the history of Western philosophy, Barfield explores the pervasiveness of poetry’s impact on philosophy and, conversely, how philosophy has sometimes resisted or denied poetry’s influence. Although some thinkers, such as Vico and Nietzsche, praised the wisdom of poets and saw poetry and philosophy as mutually beneficial pursuits, others have resented, diminished or eliminated the importance of poetry in philosophy. Barfield’s book traces the history of this ancient quarrel between philosophy and poetry through the works of thinkers ranging from Plato to Bakhtin.

In the first chapter, Barfield reviews Socrates’ criticism of poetry in The Seventh Letter, The Republic, and other Platonic dialogues that poetry, as a form of imitation, is removed from the truth (597e) and that the poet knows nothing except how to imitate and relies exclusively on words for these imitations (601a). Furthermore, and more importantly, poetry has the power to corrupt even the best sort of person (607b). However, Socrates does permit certain forms of poetry, if it does not distract a person from righteousness, excellence, and the truth, for while poetry cannot make us wise, it can lead us to wisdom. Socrates’ strategy towards poetry therefore is first to exile the poets from the city, then to create a new poetry capable of serving philosophy, and finally to place philosophy into the realm of silence so it becomes inaccessible to poetry itself.

Whereas Plato found a fair amount of overlap between poetry and philosophy in their claims about truth, the good, and the gods, Aristotle thinks the poets pose less of a threat regarding such theological and metaphysical questions, and, as a result, he offers them practical advice in the production of great poetry.Aristotle finds more similarities between poetry and ethics;for example, tragic reversals can be ethically illuminating. But these practical matters are ultimately subordinate to the theoretical sciences, where philosophical contemplation and not poetry reigns. Aristotle consequently recognizes the value that poetry offers but limits the range of claims that the poets can make, whereas Plato accepts the poets’ works directly and answers it with a new type of poetry known as the Platonic dialogue.

Chapter three looks at both Plotinus and Augustine, with the former recognizing the power and value of poetry to lead the mind in contemplation with the good. Poetry is a step on the ladder of the mind towards its fusion with the divine. It is this intersection of the divine and human for which Augustine also aims. Augustine, rather like Plotinus, initially thought that poetry makes us appreciate the beauty of the world that can ultimately lead us to divine contemplation. However, later in his thinking, Augustine views both poetry and philosophy as sources of the depraved and ancient opinions of paganism which must be eradicated for Christian revelation. Those Christians who belong to the city of God know that the supreme good lies within God, whereas both the poets and the philosophers think it resides within themselves.

Barfield next turns to Boethius and Dionysius in chapter four to show how the truth of the one true God became personified in a variety of sources. In Boethius’s writings, philosophy is praised and poetry is disregarded, while Dionysius replaces poetry with mystical contemplation as the oracle for the voice of God and in contrast to the philosopher and non-mystical theologian. Thus, the Neo-Platonic Christian world places revelation above both poetry and philosophy. This position is modified by the time of Thomas Aquinas, which Barfield examines in the following chapter. Here Barfield looks at Aquinas’ understanding of beauty and how it is related to a more positive account of poetry, albeit one which keeps poetry subordinate to philosophy and revelation. Barfield gives particular importance to Aquinas refusal to write after 1273. Interpreting Aquinas’ silence as he did with Plato’s Seventh Letter, Barfield concludes that for both thinkers there exist some mysteries or experiences that exceed our capacity to possess and articulate. Unfortunately, it is not clear to the reader whether for Barfield such silence favors philosophy, poetry, or revelation.

In chapter six, Barfield examines Vico’s new science, in which poetry and myth are the equivalent of divine revelation. It is only when philosophy arrives that humans move from imaginative universal accounts to an intelligible universal one. But this substitution is not one of progress, because philosophy in turn becomes a type of ironic poetry and a new myth is needed to replace it. For Vico, this cycle between poetry and philosophy is interrupted with the historically true myth of Christ’s Incarnation. With this new historical event, the philosopher’s consolation resides not in the hope of earthly wisdom but in the recognition of divine providence , which is somethinglarger than either the poet or the philosopher. It is divine providence that enables us to move from poetry to philosophy and then from philosophy to the irony of which the philosopher can be aware.

After Vico, Barfield’s next two chapters focus on Kant and Hegel. In his theory of aesthetics, particularly of the sublime, Kant associates poetry with genius. In our pursuit of a priori principles, it is genius that allows us to move from nature to poetry, and, as the highest art, poetry permits us to access aspects of the phenomenal world beyond what nature itself can provide, and, ultimately, to God itself via moral feelings. By contrast, Hegel distrusts the poets if the aim is wisdom. Poetry is inadequate to the fullness of self-consciousness, which is the goal of philosophy. However, Hegel does not banish poetry but rather subjects it to philosophical analysis in order for self- consciousness to be fully realized. Presumably Hegel would make the same claim about revelation as he did about poetry, but Barfield is silent on this point.

In chapter nine, Barfield looks at Kierkegaard’s use of poetry in turning one towards philosophy. Reacting against the philosophical systemization of Hegel, Kierkegaard conceives of poetry as a useful foil, but he also recognizes the danger that poetry can present as it may become a form of irony that prevents genuine ethical or religious experience. Still, poetry can provide a sense of longing that is a clue to the truth of the universe. However, it cannot for Kierkegaard make the leap of faith that carries us across the chasm between our actual lives and the reality of God, who is our deepest need.

Like Kierkegaard, Dilthey understands poetry to play an important role in our understanding of the world, but for a different end. Embracing an inversion of the Platonic perspective on poetry and philosophy, Dilthey rejects transcendence and places poetry in a preeminent place among the arts and gives it greater importance than philosophy. Instead of metaphysics, Dilthey looks at what he calls metaphysical moods: a historical sense or state of mind that recognizes the finitude of existence when it encounters the eternal and untouchable world. Philosophy makes knowledge claims of such a mood, but when these claims are refuted by Dilthey, the domain of metaphysics shifts into that of poetry. Thus, Dilthey’s refutation of transcendence and philosophy itself makes space for poetry to return to preeminence in our understanding of the world.

This return of poetry as a source of knowledge plays a critical role in Nietzsche’s thought. Poetry should provide “signposts” for the future by giving examples and possibilities for great and beautiful souls to chart out and embody the “ever increasing elevation of man” (Human, All Too Human, 99). To accomplish this task, poets should come into immediate contact with reality, as the classical Greek poets had in their affirmation of every aspect of life, and reject the rationality of Socratic philosophy. Heidegger continues Nietzsche’s project with his belief that poetry illuminates and un-conceals reality as it truly exists. For Heidegger, the scientific attempt to understand and shape language is a futile one because language shapes us. In order to truly“know thyself,” one must return to a language most purely spoken, and such a language for Heidegger is poetry.

In his last chapter, Barfield explores Bakhtin’s theory of novelistic consciousness, in which multiple voices speak through a language that has materialized in the novel. In other words, the novelist is a ventriloquist with voices agreeing and disagreeing with each other in the same book. In this context, Barfield places the quarrel between philosophy and poetry as the quarrel between poetic wisdom and prose wisdom. The novelist’s role is to invite other voices into his medium, with poetic wisdom illuminating to the reader new relationships among language, consciousness, and reality in this multivocal novel.

Unlike the previous chapters, I am less persuaded by Barfield’s use of the poetic and prose wisdom dichotomy in Bakhtin’s thought, as Bakhtin is not really concerned with philosophy or its relationship to poetry. The one exception in Bakhtin’s writing is his first work – one not mentioned by Barfield – Toward a Philosophy of the Act, in which Bakhtin rejects a Kantian ethics for an existential relational one. Although the novelist’s consciousness potentially can be a site where poetry and philosophy quarrel, it does not necessarily have to be, as other voices are permitted in the conversation.

However, this is a minor criticism to a philosophically ambitious and accessible book about the relationship between philosophy and poetry. Not only does Barfield provide the overarching thought of each thinker he examines, but he also shows how their thought can contribute to their and our understanding of the place of philosophy, poetry, and the pursuit of the truth. It is highly recommended for those interested in this subject and makes a lasting contribution to the scholarship on this question.

This review was originally published with the same title in Bryn Mawr Classical Review on December 12, 2011.

The Form of Politics as Friendship

The Friendship and Politics Symposium