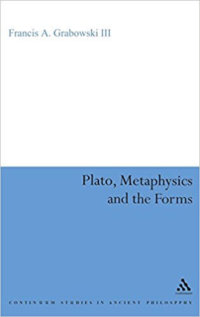 Grabowski approaches the Platonic theory of the Forms as an epistemological problem where he rejects the Forms as abstract universals and instead tentatively concludes that they are perfect particulars. For Grabowski, the Forms are a combination of the universals and particulars. However, as the author admits, Plato never explicitly states whether the Forms are universals or particulars, thereby making Grabowski’s central argument inconclusive. Nonetheless, Grabowski’s book is valuable to consult because it runs contrary to the conventional scholarship on the Platonic Forms as does his treatment of Plato’s theory of the Forms as an epistemological rather than metaphysical problem.

The book has an introduction, conclusion, and three main chapters. Chapter one reviews and criticizes the standard interpretation of Plato’s theory of the Forms as metaphysical abstract universals. Chapter two sheds light on the intellectual background of Plato’s epistemological considerations by looking at his predecessors, specifically Homer, Xenophanes, Heraclitus, and Parmenides, all from whom the author claims Plato derived many of his ideas. Chapter three makes the argument that the Forms are perfect particulars and connects Plato’s epistemology and metaphysics. The book concludes that Plato’s epistemology is one of acquaintance with the Forms known through direct contact rather than some discursive process. As perfect particulars, the Forms therefore become a provisional solution to the epistemological problem that Plato had confronted.

Grabowski examines how the Forms are known rather than how they exist. Citing the Cratylus and Phaedo as well as passages from Aristotle’s Metaphysics, Grabowski contends that Plato’s metaphysical theory was developed as a result of his concern about knowledge, specifically how someone could know anything in a world that continually undergoes change. Plato believed that knowledge was possible, thereby committing himself to the existence of eternal and unchanging entities. From this epistemological premise, Plato arrived at the metaphysical conclusion that the Forms must exist. But are these Forms abstract universals as the standard interpretation claims?

For Grabowski, the answer is no, as demonstrated in the inconsistency of how the Forms are referred to in the Platonic dialogues as both collective and individual entities, as states both of being and of becoming, and as both universals and sensible particulars. The Forms are described as παραδείγματα in the Euthyphro (6e6), Republic (472c4, 501s2-b7), and Timaeus (28a6-b2). Instead of being collective and abstract, the Forms for Grabowski are individual different objects that have a sensible nature. They are concrete standards, like the platinum-iridium bar housed at the International Bureau of Weights and Measures is the concrete standard of one meter, as opposed to the abstract criterion of the path of light travelled in a vacuum during a certain time interval. As παραδείγματα, the Forms therefore are not abstract universals, which can exist at several places at once; rather, they are sensible particulars that exist only singularly and independently of each other.

This new understanding of the Forms stems from approaching Plato’s theory from an epistemological rather than metaphysical view. The problem that Plato confronted was that, on the one hand, knowledge is akin to sense perception, while, on the other hand, knowledge is also permanent in its truth, like mathematics and logic. Grabowski’s contention that the Forms are concrete exemplars or perfect particulars solves this problem: the Forms are known perceptually because they are concrete, but they also are unchanging and therefore true. The assumption that Grabowski makes is that Plato subscribed to an epistemology of acquaintance: knowledge overall is perceptual in nature, whether through personal experience, divine inspiration, or telepathic cognition. But is this assumption correct?

Although Grabowski presents a series of pre-Platonic thinkers who subscribe to this acquaintance mode of knowledge, the connection between these thinkers’ epistemology and Plato’s is not evident. It is possible, and most probable, that pre-Platonic thinkers influenced Plato’s epistemology, but the author fails to make that connection explicit in chapters two and three. It is also strange that the author substantially skips over the Parmenides, especially when trying to establish the relationship between pre-Platonic thinkers and Plato. The failure to make this connection does not eliminate the acquaintance mode of knowledge for Plato; however, the gap seems to raise more questions than answers about Plato’s epistemology.

Grabowski is on firmer ground when the analysis turns to the Platonic dialogues themselves. The evidence cited for an acquaintance mode of knowledge is Plato’s frequent use of direct-objection constructions with verbs of knowing and the recurrent metaphor of the senses as the way one acquires knowledge. Scrutinizing the terms γιγνώσκειν, εἰδέναι, and ἐπίσταστηαι in the Theaetetus, Meno, Republic and other dialogues, Grabowski argues that propositional knowledge did not appeal to Plato, thereby leaving him with the choice that knowledge is derived from words alone (which is rejected) or by direct experience (the acquaintance mode of knowledge). Grabowski continues his philological analysis with a look at δύναμις in the Phaedrus and Republic as the power or faculty to bring knowledge or knowing into a person’s mind. But this faculty of the mind for Grabowski is not just a metaphorical way of speaking about knowledge; it is literally an organ or power that directly touches the Forms for knowledge.

This part of Grabowski’s argument seems to me for the most part correct, for Plato speaks of reason not only in its discursive aspect but also in its intuitive nature. This is Grabowski’s point: the organ of the mind comes in direct contact with the Forms by intuition rather than by discursive (abstract) thought. However, if Grabowski is correct and knowledge is obtained by acquaintance, then how do humans acquire mathematical and logical truths? We know mathematical proofs, for instance, are true, but do we understand them through acquaintance or through some other method, such as abstract reasoning? If it is the latter, then what is the relationship between the mode of acquaintance and the mode of abstraction in Plato’s epistemology? Although Grabowski does an excellent analysis on the acquaintance mode of knowledge, the study leaves one asking about the place of other modes of knowledge, specifically about mathematics and logic, in Plato’s epistemology.

In spite of these questions, Grabowski’s Forms are definitely not abstract universals, for then they could not be seen or touched; rather the Forms are a combination of eternal and sensible truth. They are paradigmatic: the Forms are perfect, like mathematical truths, but also sensible, allowing us to access them directly. Because we know sensible things through personal acquaintance, and because we know the Forms through a similar process with δύναμις, the “mind’s eye,” the objects of these similar methods are ontologically akin and therefore concrete. The result seems to be that Plato’s Forms are not abstract and universal but concrete and particular.

Grabowski’s study thus places the study of Plato’s Forms in the context of epistemology instead of metaphysics and rejects the standard interpretation of the Platonic Forms. The study is not entirely persuasive, as the author admits, for Plato himself does not make any conclusive statement about the Forms. Nonetheless, Grabowski makes a strong case for the consideration, or rather re-consideration, of Plato’s theory of the Forms with a potent combination of philological analysis and cogent argument that runs counter to conventional scholarship. His claim that Plato’s Forms are perfect particulars should prompt us to raise more questions about Plato’s theory of the Forms and explore where these questions lead.

This review was originally published in Bryn Mawr Classical Review on May 13, 2009.

On the Catholic Appreciation of Leo Strauss

Beyond Radical Secularism: How France and the Christian West Should Respond to the Islamic Challenge