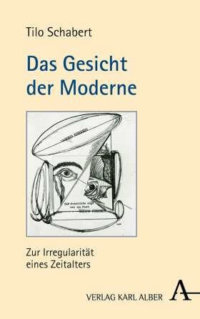 Das Gesictht der Moderne is a reworked and updated version of a book by Tilo Schabert released by the same publisher 40 years ago under the title Gewalt und Humanität.  The first eight chapters of the two books are much the same, bearing in fact exactly the same titles.  However, Schabert has dropped the earlier ninth chapter, which dealt with Arthur Bremer, the would-be assassin of George Wallace, and replaced it with a short essay, “Gestalt in der Moderne: Das konstitutionelle Regime” (Order in Modernity: The Constitutional Regime).  I will return below to the significance of this change.

The book’s new title is difficult to translate into English; Schabert’s own attempt, “The Figure of Modernity,” doesn’t really work for me.  The word Gesicht, derived from the verb sehen (to see), has a double meaning in German.  It can mean “eye,” “face,” or “vision” in the active sense of “seeing”; but it can also mean “face” or “image” in the passive sense of that which is seen.  The same active/passive meanings adhere to the related English word “sight.”  A person has sight as an active ability to perceive the world, but a sight can also be perceived.

That both meanings are involved here is evident from the book’s cover—a 1920 sketch by the Dada artist Johannes Theodor Baargeld, entitled “das menschliche Auge und ein Fisch, letzterer versteinert” (The Human Eye and a Fish, the Latter Petrified).  Anyone interested in exegesis of the cover should probably go here, where the complex image can be enlarged for clearer scrutiny.

The sketch is somewhat like an ellipse revolving around two foci, the human eye and the fish’s eye.  The prominence of the eyes implies that modernity is a way of visualizing the world.  The sketch also vaguely resembles an old-fashioned camera, reinforcing the idea of seeing.  But it also reminds me of a distorted human face, thereby suggesting that which is seen.  And of course, as is typical of all Dada works, the drawing is a whimsical study in disorder (Irregularität), showing that the natural order of the cosmos is broken, with the pieces to be reassembled by human observers however they please.  Since there is no natural order, why not juxtapose a human eye with the eye of a petrified fish?  You do it because you can.

Schabert bases his analysis of modernity on key texts by important thinkers of the Renaissance, Baroque, and Enlightenment, such as Pico della Mirandola, Bacon, Newton, Montaigne, and Condorcet.  He uses these writers to trace the development of characteristic themes of modern culture.  Replacement of cosmic order by a secularized conception of nature.  Limitless exploitation of nature to improve man’s material comfort.   Devaluation of the achievements of past societies in comparison to fantasies about unlimited progress in the future.  Rejection of traditional wisdom as a guide to moral conduct, to be replaced by the latest novelties of science.  Emergence of the Individual as his own source of order.  Perceived meaningless of a world where there are no limits on individual imagination and desire.  Despair arising from meaningless.  And limitless violence as the attempt to create meaning where it no longer arises from tradition, convention, institutions, and faith in transcendence.  Schabert cites Camus for the rediscovery of limits, but he doesn’t seem too hopeful about it.

The original last chapter in Gewalt und Humanität extended the bleak prospect of the earlier parts of the book.  Based on the diary of Arthur Bremer, who hoped to assassinate Richard Nixon but had to settle for shooting George Wallace, it highlights the meaningless of Bremer’s life.  This young man who had failed at almost everything wanted to be recognizing for doing something big, like shooting a president.  When he couldn’t do that, he turned to a softer target.  “I want something to happen,” wrote Bremer, unconsciously echoing the ennui described by Robert Musil in Der Mann ohne Eigenschaften: “Es muss etwas geschehen.”

I agree with Schabert that constitutional government is one of the greatest achievements of modernity, but he doesn’t really answer the obvious question: How could such a beneficent system, based on a philosophy of self- and mutual-limitation, emerge from the intellectual wasteland of disorder, arrogance, and limitless desire that he depicts in such detail.  I hope the answer will be forthcoming in another book, although Tilo, like the rest of us, isn’t getting any younger.

In conclusion, let me plead for a university press to publish a speedy English translation of Das Gesicht der Moderne.  Schabert holds a special place in the field of Voegelin studies, being one of the small group of brilliant doctoral students that Voegelin assembled around himself in Munich in the 1960s.  Schabert’s works have been prolific, but they are more than that—they are profound, provocative, and path-breaking.  Those works, especially Das Gesicht der Moderne, should be made available to new generations of scholars around the world for whom English is now the natural language of scholarship.

I’m old enough that I wanted to learn German as a graduate student of political theory.  I can still read it more or less, but I can’t claim to have extracted all the nuances of Schabert’s subtle prose.  His insights are too important to be left in German, which, whatever its illustrious history in science and scholarship, has become a regional language in our own day.

Tom Flanagan is Professor Emeritus of Political Science at the University of Calgary in Canada. He is author of Persona Non Grata: The Death of Free Speech in the Internet Age (Signal, 2014) and was fortunate enough to take a course from Eric Voegelin when the latter was a visiting professor at Notre Dame University in the 1960s.

Political and Artistic Divides in Baudelaire: An Aesthetic of Evil Baudelaire and Benjamin: Persons or Monads?

The Form of Politics as Friendship

The Sophists and Socrates: A Complex Relation