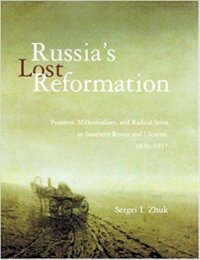 Suppressed by both the Russian Orthodox Church and Soviet scholars, Russia’s “radical reformation” has been lost and forgotten in recent historiography.  Zhuk resurrects this movement into our historical consciousness by primarily looking at two nineteenth-century groups: the Shalaputs and the Stundists.  Both are Protestant, influenced by the import of German immigrants into Russia, and attracted large following among the rural populations of southern Russia and Ukraine.  In a region with a commingling of a variety of traditions – Jewish, Cossack, Mennonite, German, Russian, and Ukrainian – both the Shalaput and the Stundist movements flourished, creating a new evangelical identity that emphasized the Protestant work ethnic, a culture of the written word, and millennial expectations.  Zhuk ultimately concludes that Russia’s “radical reformation” had transformed the identity of these peasants to such an extent that they could no longer be seen as Orthodox with their new views on religious authority, human sexuality, and social equality.

In chapter two, Zhuk shows that the origins of the Shalaput movement came from the Khlyst tradition of dissents from the Russian Orthodox Church and the evangelical traditions of the Molokans and Mennonites.  The Shalaputs had eschatological expectations and through their rituals tried to reach an emotional climax that embodied the Holy Spirit.  Like western Protestant movements, the Shalaputs created their own patterns of rational behavior, avoiding alcohol, concentrating on work, and promoted women to positions of power.  Zhuk traces the historical evolution of this movement in three stages: 1) the Khlyst and Skopets phase that rejected the material world (1833-65), the Molokan, Pryguny, and Mennonite phase that reconciled itself with the world (1861-72); and the Duplii’s phase that sought to evangelize the world (1860s-1880s).  The end result was that both the Russian imperial state and the Russian Orthodox Church became suspicious of the Shalaput movement, viewing it as a possible threat to their authority.

In chapter three, Zhuk next studies the Stundist movement, the largest group of religious radicals behind the Shalaputs.  Like the Shalaputs, the Stundist were influence by German and Mennonite colonists and later the Baptists, and rejected church institutions in favor of the individual experiences of the Holy Spirit.  The movement splintered into the 1) Stundo-Baptist faith which was more conservative in theology and practices, imitating German Baptists congregations; and the 2) Radical Stundism that followed the traditions of the Shalaput movement with its emphasis on unmediated spiritual communication between believers and God.  Along with the Shalaputs, the Stundist movement began to criticize both the Russian Orthodox Church and imperial state as well as began a program of social activism and religious evangelism.

Although both the Shalaputs and the Stundist movements shared similar religious practices and had the same millennial expectations, the two groups differed on numerous issues.  The Shalaputs were mostly Russian, acknowledged their Orthodox roots, and were more mystical than rational in their theology.  By contrast, the Stundists were mostly Ukrainian, more indebted to the German Pietistism, and fully embraced the Protestant “work ethic.”  It may be a simplification, but not entirely inaccurate, to characterize the Shalaputs as Lutherns and the Stundist as Calvinists.

In chapter four, Zhuk points out that both the Shalaputs and the Stundist movements attracted not only those that were the most active, educated, and ambitious of the peasants but also was appealed to those who were disoriented and oppressed – women, Polish Roman Catholics, Jews.  In seeking to modernize the countryside, both the Shalaputs and the Stundists created a literate culture that emphasized work and gender equality.  In fact, parts of both movements actually merged in the 1880s and 1890s, often referred to as Maliovantsy (chapter five).  This new movement, along with the Shalaputs and Stundists, formed Russia’s reformation in the creation of a new social identity for peasants that was rational, evangelical, international, and later urban, when peasants had left the countryside for the cities in search for work (chapter six).

This reformation was perceived as a threat by both the Russian Orthodox Church and Russian imperial state, especially since the spread of evangelical movement coincided with the rise of revolutionary activity throughout the country (chapter seven).  Two famous, nineteenth-century cases at the time – the Chepurnoi and the Shtenko – revealed well-established relations between Ukraine peasants and radical Russian and Jewish revolutionaries.  For Zhuk, these were exceptions to the rule, for “. . . evangelical peasants did not participate in the political struggle during the Revolutions of 1905 and 1917” (384).  However, as Zhuk acknowledges the Russian reformation with its international outlook and modernizing tendencies did contribute to the “. . . shaping [of] millennial expectations among the mass of oppressed and exploited rural population” (Ibid.).  It had partially set the conditions for the Revolutions to succeed.

In addition to being meticulously argued with excellent documentation, Russia’s Lost Reformation is highly theoretical as laid out in the first chapter.  Zhuk uses the theories of Weber, Geertz, and Turner in his study of Russia’s reformation.  Although these three thinkers for the most part were effectively used to illuminate Zhuk’s argument, I was somewhat confused about the causality among culture, belief, and action in the book.  Was it historical circumstances – the commingling of cultures in southern Russia and in the Ukraine – that led to the reformation movement (Turner)?  Or was it certain beliefs that led to the reformation movement (Weber)?  Or both?  And how are these factors related to the evangelical peasants program of social criticism and activism?

But this is a minor concern to an extremely well-written work that contributes to a neglected aspect of Russian religious history.  Zhuk displays a clear mastery of the material and presents the details of the reformation without losing the thread of the narrative.  I would only hope that he will continue this narrative of how Protestantism survived under the Soviet Union and reemerged after its collapse.  In short, Russia’s Lost Reformation contributes to our deeper understanding of Russia’s religious traditions, cultural complexity, and historical richness.

This review was originally published in Religion and Politics Newsletter XXI: 1 (2004).