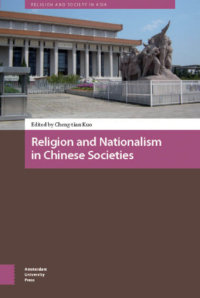 A Varieties of Chinese Nationalisms and Their Implications on Religions

This volume is a collection of papers discussing “the origin, development, content, and implications of religion-state relations” in mainland China, Taiwan, and Hong Kong (10). The lens of using nationalism in examining state-society-religion relations works as an overarching theme to bring these social contexts together. The result is an informative as well as revealing comparison of a variety of Chinese nationalisms. This scholarly work is a much needed volume for the Chinese world with rising nationalistic sentiments.

The book is organized into three parts: historical research before 1949, current state of affairs in mainland China, and examination of the same subthemes in Taiwan and Hong Kong. In Part One, five chapters discuss the intellectual origins of “Chineseness,” nationalistic concepts due to missionizing, competing discourses of nationalism, and Hui Muslim identity in the Republic China. Part Two includes papers examining new Confucian nationalism, nationalistic narratives concerning Yiguandao, Daois, Tibetan Buddhism, and Protestants. Part Three has three essays discussing religious-nationalistic identity in Taiwanese politics, a multiplicity of national identities around Mazu folk religion, and the role of engaged Buddhism and Catholicism in Hong Kong’s Umbrella Movement. Taken in its entirety, this book successfully demonstrated both the continuity and nuanced changes of Chinese nationalism in different social contexts. Although the introductory chapter raises the question the reasons for divergence, and readers may glean a nuanced set of answers from a careful reading of the fourteen chapters, it could have provided another concluding chapter to provide some theoretical answers to this question.

Hallmarks of Nationalisms in Mainland China, Taiwan, and Hong Kong

In a sense, mainland China, Taiwan and Hong Kong are natural laboratories to test how Chinese nationalism, having originated from a historical crisis threatening the Chinese nation at the beginning of the twentieth century, unfolds and evolves in different cultural soils. As the editor Cheng-tian Kuo summarizes, three divergent models of state-religion relations have grown out of the same root. In China, a state religion, “Chinese patriotism,” has been born with a “political Trinity” at its core: the three personas of China, socialism, and the Chinese Communist Party (CCP).

China, socialism, and the CCP are the three holy personas in one god. China is socialism; socialism is the CCP government; and the CCP government is China. One cannot love one without loving the other two personas, Conversely, one cannot reject one without rejecting the other two. In the minds of CCP leaders, the constitution of the PRC is not the supreme law of the land; the Chinese Trinity is. (26)

In Taiwan, democratic processes of checks and balances have largely limited state dominance over religions. Most religious groups have also “adapted to democracy by integrating democratic values into their theologies and organizational structures” (14). As a result, Taiwan has begun to see a truly pluralistic society where models of civil religion coexist independently with either Chinese patriotism or Taiwanese nationalism, but different religious groups also tolerate each other within civil boundaries.

Hong Kong exists between the China-Taiwan continuum in terms of how intense state ideology and nationalistic discourses affect or invade religious groups. Kuo rightly terms it “a fragile civil religion” where rights and boundaries need to be actively claimed by religious leaders and citizens from time to time. As the editor insightfully points out, even within each of these three models, there has been something new taking place that have implications for reshaping the dynamics of state-religion relations in each contextual site.

A Revisionist Approach to Explain the Divergence

After redefining the key conceptual categories such as nation and nationalism, the editor criticizes the dominant post-Enlightenment modernity approach which proposes that a modern nation-state is the result of co-existence but independence of state and religion. However, Kuo’s critique against Immanuel Kant for degrading religion as irrational and harmful to modernity, and his general response that “modern state-building is regarded as scientific and religion is viewed as anti-scientific,” does not do justice to Kant or the modernity approach. Take the development of Protestantism for example. Post-Enlightenment thought did introduce ideas of progress, Baconian evidentialism and positivism to European and later American Protestant thought, but religion was hardly exerting less influence on state-building because it was considered anti-scientific. Quite on the contrary, Protestantism in many ways nurtured rationality in theological thinking. And early American civil religion also drew inspirations from Protestant theology, especially its post-millennial eschatology. So post-Enlightenment religion-state relations did not follow a linear decline, as Kuo correctly suggests. Nevertheless, through missionizing projects largely along the line of American Social Gospel movement, a much later development in the early 1900s, the core of modernity problem in mainland China did see a tension between religion and state-building, and many liberal-minded Chinese wanted to use religion to serve their nationalistic aspirations for China’s independence.

The editor rightly points out that Chinese nationalism was China’s response to modernity around 1900: “Modern nationalism and the nation-state emerged in Western Europe only in the early eighteenth century and were not introduced in China until the late nineteenth century” (21), for before that China lived through dynastical cycles with Han and non-Han ethnic rulers and flexible territories. What is entailed by modern nationalism to denote a nation-state with fixed territory did not exist in China. It was not until 1911 that China had her first modern nation-state. But a few decades of wars, political and religious anarchy made a Chinese Republic a missed opportunity. Soon KMT and CCP, both being nationalistic parties, vied for orthodoxy. Mao’s rule launched a “communist modernity program” from 1949 to 1979 which eventually proved to be disastrous (25). Widespread disillusionment with the 1989 Tiananmen crackdown further accelerated CCP’s theological reformulation of Chinese nationalism with its political trinity (26).

It is certainly important to trace the origin of Chinese nationalism by getting the definitions right. In Kuo’s analysis of the Chinese understanding of “nation,” he distinguishes two terms, minzu and guozu.  He claims that the use of guozu by CCP is a strategic syncretism of religion and nationalism to “develop a new state cult” (16). But there is a factual error when Kuo mentions that before 1949 “Liang Qichao and most Chinese also use minzu to refer to the fifty-six ethnic groups, which together constitute the one and only Chinese nation” (16). But historically speaking, the concept of “fifty-six ethnic groups” was an artifact created much later in the 1950s by the communist regime’s “ethnic recognition” projects. In 1953, before CCP set out their recognition projects, there were over 400 ethnic groups in mainland China.

In a way, the divergence of nationalistic expressions in mainland China, Taiwan and Hong Kong is not difficult to explain because of the different nature how nationalistic discourses in political and socio-economic structures in these societies interact with religious groups. Although Taiwan under KMT rule had tried to establish a state religion of Chinese nationalism, its priestly status was challenged by groups like the Presbyterian Church towards democratization. Later KMT’s attempt to resurrect Chinese nationalism had Taiwanese nationalism as a more popular competitor, curtailing its influence. So it seems like the historical transitional role of Presbyterians in Taiwan was timely to assist the breakthrough from a party-state rule. Structural changes in Hong Kong were even less of a linear progression, and the Umbrella Movement and its implications seem to place Hong Kong under a similar scenario as Taiwan in the 1980s. Popular identification with Hong Kong identity is competing with an increasingly top-down government-imposed nationalistic identity. As the book suggests, “lacking a geographical and political buffer zone like its Taiwanese counterparts, the Chinese state and the Hong Kong government are not likely to respond kindly to these political ‘heresies’” (44).

Even now, Chinese nationalism in its overseas propaganda expressions also forms an overarching theme shared by all three sites as China marches towards a “perfect dictatorship.” It is likely that researchers will begin to see trends of convergence among these three models over time, as the book suggests that “the state religion of Chinese patriotism is close to becoming the hegemonic religion of all religions, not only requiring all other religions to be submissive to it but also to integrate Chinese patriotism into their theologies and organizational structures” (43). Thus this volume has a great potential to become an informative resource for future scholarly research on Chinese nationalism.

Mary Li Ma is an Associate Editor of VoegelinView and a Senior Research Fellow at the Henry Institute for the Study of Christianity and Politics at Calvin College in Michigan. She received her doctorate in sociology at Cornell University.