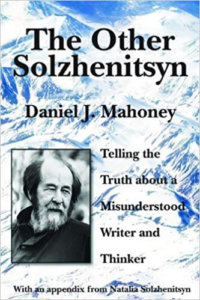 Daniel J. Mahoney’s The Other Solzhenitsyn is a much needed reappraisal of the Aleksandr Solzhenitsyn’s place as a writer, philosopher, and political thinker in the English-speaking world where he is caricatured as a Russian nationalist, religious zealot, and political authoritarian. In nine chapters, Mahoney portrays a different Solzhenitsyn than perceived in the West as someone who is a thoughtful patriot, possesses a sensitive religious conviction, and an advocate of grass-root democracy. The book concludes with two appendixes: the first provides a historical and archival context of Solzhenitsyn’s work; the second is a reproduction of the introduction to The Gulab Archipelago written by Solzhenitsyn’s widow.

In the first chapter, Mahoney explains that Solzhenitsyn’s The Red Wheel, The Gulag Archipelago, and Letter to the Soviet Leaders are a repudiation of the ideological foundations of the Soviet Union in its attempt to remake human nature and society in its own image. Instead of the ideological lies of communism, Solzhenitsyn supports a thoughtful patriotism that provides both a love of country and an acknowledgement of its past crimes. In Letter to the Soviet Letters, The Russian Question, Russia in Collapse, and The Little Grain Between the Millstones, Solzhenitsyn articulates a patriotism that steers a path between the extremes of anti-patriotism and self-loathing of intellectuals and the delusions and fantasies of radical nationalists. Solzhenitsyn’s patriotism is a national recovery of memory, both its achievements and its depravities. Only after this is accomplished can Russia look towards its own traditions, as well as to the West, for a way forward in learning self-government.

To recover national memory, one must not only look at the crimes of the past but also acknowledge that human agency and not historical determinism plays a decisive role in the shaping of the individual and collective destinies of human beings. In the next two chapters, Mahoney shows that for Solzhenitsyn the failures of Emperor Nicholas II serves in stark contrast to Prime Minister Pytor Stolypin’s attempt to reform Russia as two models of human agency of how to confront evil. Stolypin was a conservative reformer who started a moderate path of social development for the common good which created enemies both on the political Left and Right. His assassination stopped his project of social and civic restoration, leaving a weak and pusillanimous monarch who was incapable of effectively confronting evil.

Chapter Four explores Swiss Russianist George Nivat’s “three pillars” of Solzhenitsyn’s thought: the literary investigation into the truth of the Soviet camps in The Gulag Archipelago; the dramatized historical account of the Russian Revolutions of 1917 not as predetermined but contingent on human agency in The Red Wheel; and the philosophical search for truth in The First Circle. Mahoney spends most of this chapter on this “third pillar” to counteract Western perception that Solzhenitsyn is primarily a writer and not really a thinker. In his detailed and compelling analysis of the characters in The First Circle, Mahoney shows that Solzhenitsyn is a serious philosophical thinker that is preoccupied with the questions of truth, morality, and hope. In his search for these values and in exposing the lies of individuals and society, Solzhenitsyn should be seen as both a writer and thinker of the first rank from whom we can learn.

In the next chapter, Mahoney categorizes Solzhenitsyn’s account of totalitarianism as one fundamentally based on lies with the role of literature to provide truth if the regime does not. The key characteristics of the totalitarian state for Solzhenitsyn are constant fear; secrecy and mistrust; complicity in a network of repression; betrayal, corruption, and lie as a form of existence; and class cruelty and slave psychology. The task of the writer, such as Solzhenitsyn, is to remember everything that has transpired in the totalitarian state and do nothing to obfuscate the truth about it. The twin pillars of the Soviet Union were violence and lies that created an ideological despotism where the integrity of the person was washed away with the millions in the gulags. The remembrance of these crimes is the first restorative step for Russia to take in order to rehabilitate itself from its totalitarian past.

Mahoney compares Solzhenitsyn’s criticism of the ideological lie of the Soviet Union with Raymond Aron’s critique of communism. Aron himself met Solzhenitsyn and consequently wrote about the Russian writer. For Aron, Solzhenitsyn is more than a writer: he represents an unconditional spiritual commitment to truth and liberty. Although Aron rejects the specific political and religious ideas of Solzhenitsyn, he appreciates that Solzhenitsyn is writing for the future, when a new generation of pragmatic and civic-minded leaders would be willing to break from ideological thinking. Like Solzhenitsyn, Aron believes that the legitimacy of Soviet leaders resides in their ideology and not in any connection to the pre-revolutionary past of Russia. Both thinkers oppose historical determinism and instead advocate human agency as the motor that moves history.

In Chapter Seven, Mahoney analyzes both volumes of Solzhenitsyn’s Two Hundred Years Together that looks at Russian-Jewish relations. Although Mahoney believes Solzhenitsyn is not anti-Semitic, he does note that the tone of the work can be readily misinterpreted, with Solzhenitsyn’s frank account of this relationship. Solzhenitsyn criticizes individual Jews (as well as individual Russians, Ukrainians et al.) but never the Jewish people, the state of Israel, or any groups; and he calls for both Russians and Jews to assume collective moral responsibility for the crimes of the Soviet revolution and state but never suggests collective guilt. For Solzhenitsyn, guilt is an individual phenomenon, while responsibility is a collective one. He acknowledges the singularity of the Holocaust without minimizing the evils of the gulag and collectivization; he refuses to apply a double standard to Jews and non-Jews in their role in the Soviet revolution and state; and he calls for both communities to move beyond mutual reproach to take full responsibility for their own faults and limitations. In this book, Solzhenitsyn provides an impartial historical inquiry that seeks to move both Russians and Jewish forward in their understanding and relationship with each other.

Mahoney next looks in chapter eight at Solzhenitsyn’s “binary tales” collected in Apricot Jam and Other Stories, which were written in 1993-99 and have received little attention in the West. The stories are “binary” in the sense they consist of two tales in the same story with the theme of how socialism actually worked in the Soviet Union in the 1920s and 1930s. In these stories, Solzhenitsyn portrays the concrete cruelties of the Soviet Union as well as the persistence of morality and truth in some of the characters. In spite of brutality and blunt force of collectivization and other Soviet “reforms,” humans still are able to preserve a sense of truth and renew their spirits in accord with the new social and political realities in which they find themselves.

The final chapter is an analysis of Solzhenitsyn’s interview with Der Spiegel in 2007, one year before his death. In the interview, Solzhenitsyn speaks of how he would write on stone walls and discover his faith in God when he lived in the camps; his criticism of Boris Yeltsin and qualified admiration of Vladimir Putin; and his call for repentance for the victims of the gulag and communist terror under the Soviet Union. He also speaks about his understanding of the Russian Revolutions, the relationship between history and human agency, and Russian-Jewish relations. Finally, he underscores his support for grass-root democracy and laments that Russia lacks a constructive, clear, and large-scale opposition to the current government in 2007. The chapter concludes with his thoughts about spirituality and death, with him calmly confronting his demise, being content in having lived a creative and balanced life.

But perhaps the most interesting part of this interview for us today is his thoughts about Russia’s place in the world, especially in light of recent events in Ukraine. Solzhenitsyn’s qualified endorsement of Putin in 2007 is in response to the social and economic disaster under Boris Yeltsin where the institutionalization of corruption betrayed the hope of Russian democratization. Although Solzhenitsyn supports Putin’s and Medvedev’s social and economic stabilization of Russia, he recognizes that Russia is not a democracy, something for which he hopes. Thus, we can interpret Solzhenitsyn’s endorsement of Putin (and Medvedev) as a practical calculation bound by the political realities of the moment and not an ideal one for which we could hope.

With regard to Ukraine and the other former Soviet republics, Solzhenitsyn is concerned about the “near abroad”: the approximately eighteen million Russians who reside in those states after the collapse of the Soviet Union, resulting in a separation of Slavic peoples by arbitrarily determined borders. Mahoney provides the correct context to understand the Russian, and Solzhenitsyn’s, mindset about how the eastward expansion of NATO was seen as an encirclement of Russia, especially during a time of national weakness. However, it is not clear how Solzhenitsyn would react to the recent Russian incursions into Ukraine. My sense is that Solzhenitsyn would certainly oppose the West’s involvement in Ukraine, as he did with NATO’s operations in Serbia in the 1990s, but whether he would actually support Putin’s invasion is something about which only one can speculate.

One hopes that The Other Solzhenitsyn is the beginning of a reevaluation of Solzhenitsyn’s work as a writer, philosopher, and political thinker. Daniel J. Mahoney’s book is an accessible, insightful, and informative account of Solzhenitsyn’s work and a welcome antidote to the misperceptions and supposedly irrelevancy of one of the great authors of the twentieth century. For anyone who is interested in understanding Russia, this book is an excellent entry to a thinker who has pondered about this subject as a citizen, exile, and returned prophet. The Other Solzhenitsyn not only provides us an illuminating account of Aleksandr Solzhenitsyn but also what other paths are possible for Russia today, as it attempts to move past its Soviet history of crime, corruption, and evil.

The Jagellonian Conference on Leo Strauss

Alasdair Macintyre, Charles Taylor, and the Demise of Naturalism