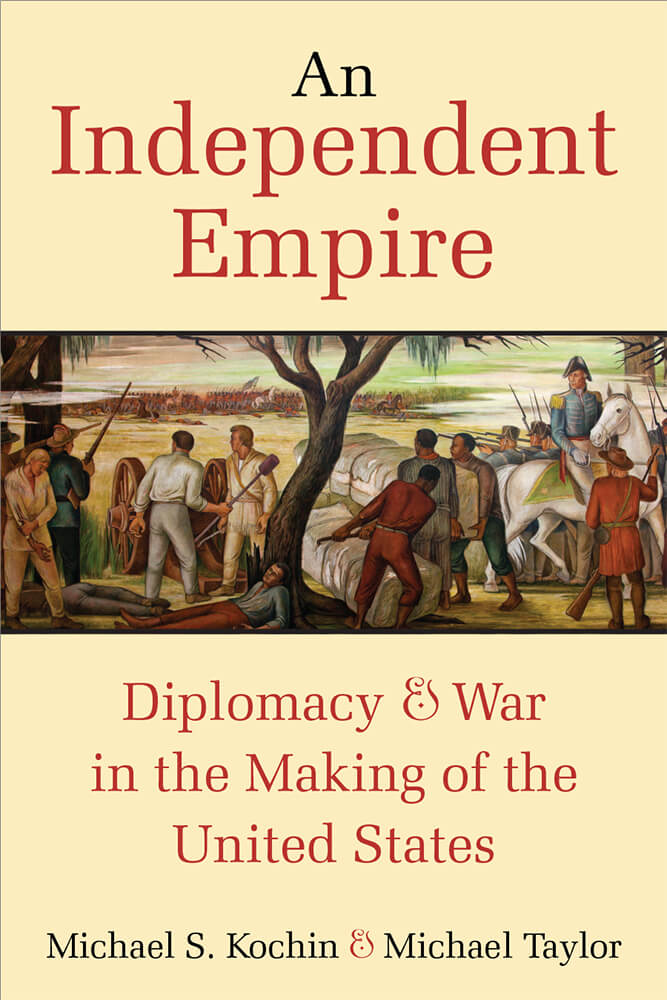 An Independent Empire: Diplomacy and War in the Making of the United States. Michael S. Kochin and Michael Taylor. Ann Arbor: University of Michigan Press, 2020.

In their quieter and more reflective moments, even strong opponents of American power must surely be grateful that it is the United States, and not Russia or China, that stands as the world’s preeminent economic and military power. The United States is a reactive rather than imperial superpower. She responds militarily to real or perceived threats, and does not seek glory in conquest. Her strongest ambitions are a very inwardly focused and bourgeois comfortable self-preservation, coupled with whatever religious or secular glory her citizens are able to achieve in their private lives. Imperialism is at best a distraction from, and at worst a threat to, these central aims. In America, Hobbes’s claim that a secure sovereign is a peaceful sovereign finds the support that it lacks among the world’s tyrannies. And the United States is indeed fundamentally secure. Though she has been exposed to grave harm by several enemies over the last century, she is free from the threat of invasion and conquest, and has been for a long time—since at least the early nineteenth century. However, prior to that time, she was in fact very insecure, and that insecurity showed itself in a very different and much more expansionary foreign policy. That period of insecurity, beginning in the colonial era and culminating in the establishment of continental security in the 1820s, is the subject of Kochin and Taylor’s An Independent Empire.

Their book tells the story of American foreign policy from colonial times to the 1826 Congress of Panama, which attempted to resolve the condition of Latin America in the wake of the collapse of Spanish power in the New World. Related domestic considerations such as fundamental and important political arguments, party politics, the roles of major statesmen, and constitutional struggles all figure in their account, but with a view to the implications for America’s relations with other nations.

The main theme of the book is the role of insecurity as a key driver of early America’s foreign policy and the foreign policy of the European nations with which she interacted. This theme is very much in line with realist assumptions about foreign policy. We see this realism in America’s attitude toward the British and the Indians in the Northwest Territory, in the long struggle over control of the Mississippi River and New Orleans, in the Louisiana Purchase, in the struggle over Spanish control (or “control”) of Florida, in American diplomats’ long and careful diplomatic navigation between the much more powerful nations of Great Britain and France and their strong desire not to be caught between those two hostile powers, and in the War of 1812. We see this realism very tangibly express itself in the establishment of the United States and its subsequent physical growth to a continental power. American realism was so successful that after the War of 1812, America could begin a transition to being an active player on the world stage pondering how to advance its interests, rather than an insecure defensive power seeking to protect itself from greater powers.

American realism is certainly not the whole story of early American foreign policy. The authors point to political and economic errors of the European powers upon which America capitalized. And they point to the political and economic prudence of Americans that contributed so much to the spirit and resources necessary to the foreign policy victories the new nation eventually secured. There is a powerful connection between a nation’s domestic policy and its foreign policy prospects. Domestic political and economic strength is essential to a successful foreign policy. At the same time, the book makes clear that those domestic strengths must be supplemented by a well-conceived foreign policy. Indeed, the book implicitly challenges today’s critics of Pax Americana and of an American foreign policy hegemonically securing the international liberal order. Domestic peace is impossible without international security, and that security requires soberly acknowledging, and prudently and courageously countering, foreign threats to the Nation.

The authors’ account, perhaps somewhat surprisingly, helps shed light on today’s ongoing immigration crisis. In recent years, the combination of a porous southern border and failed Latin American states has resulted in millions of illegal immigrants. This illegal immigration has accelerated a growing post-national outlook among our elites, many of whom now implicitly or explicitly call into question the moral and legal viability of America as a distinct nation state. The ideology of multiculturalism and the presence of large and (so far) unassimilated or partly assimilated ethnic enclaves, particularly in the southwest and California, have intensified the debate between nationalists and postnationalists. This book shows us that our immigration and national identity problems are not unique to us, and that they go back a long way. We see the Louisiana territory fall under the control of the Spanish, then the French, then the Americans. We see New England contemplate separation during the War of 1812. We see territorial disputes between the United States and British Canada. There are long-running fears that western U.S. settlers will throw in their lot with Spain, fears that only subside with the establishment of control over the Mississippi and New Orleans. We see the new American nation struggling for international respectability, its prospects for national identity and national flourishing insecure. We see the collapse of Spanish rule in the New World. Throughout all these tumults, we see peoples and territories as the playthings of competing powers, with shifting populations and national loyalties, and shifting borders. These challenges to national identity shows us something of the more permanent condition of human life beneath the sometimes deceptive appearance of territorial stability, a consequence of the constant of change, and the struggle for the military strength, the strategically defensible position, the political loyalty, and, above it all, the diplomatic skill that are all required for national security.

Kochin and Taylor have given us a wonderful and valuable account, but the book has two problems that need highlighting. The first is the occasional description of U.S. as an empire—including in the book’s very title. Despite the occasional use of the term by Founders themselves, “empire” implies rule over different peoples. The United States more closely resembles, not an empire, but rather a growing republic in the sense in which Machiavelli advises. In other words, early America more closely resembles the growing Roman republic incorporating (perhaps better than even the Romans did) different peoples into its polity. The second problem concerns the book’s account of the treatment of Indians by early Americans. Though there were undeniable and extremely serious abuses of Indians by American settlers and their descendants, the authors at times lean a bit too sympathetically in the direction of the Indians. In fact, there are philosophical nuances to this issue relating to, for example, the acquisition of a natural title to rule over land, a claim that varied in credibility and was by no means uniform among the many Indian tribes encountered by first the American colonists and then the new United States. The book’s almost uniformly sympathetic treatment of the Indians prompts questions about these varying claims.

But these two objections amount to quibbles in comparison to the book’s great strengths. It offers the reader a well-researched historical/political narrative. It provides a very helpful and necessary supplement to political accounts of the colonial and founding eras that focus on the role of ideas. As the authors put it in their concluding paragraph, “The United States would not have survived to experience new challenges beyond 1826 without the implementation of successful foreign policies, the intelligent prosecution of diplomacy, and judicious deployment of military force in the first five decades of independence.  … The United States was born of abstract ideals, but its survival and its story were rooted in these realities of diplomacy and war.” The book should be of great interest to students and scholars of early America from the disciplines of both history and political science. And it should be of great interest to students and scholars of international relations. Finally – and here the authors must be especially commended – the book is very entertaining as a political and historical adventure story on an epic scale.

The Netherlands During the Cold War: An Ambivalent Friendship and a Firm Enmity

At the Centre of Government: The Prime Minister and the Limits of Political Power