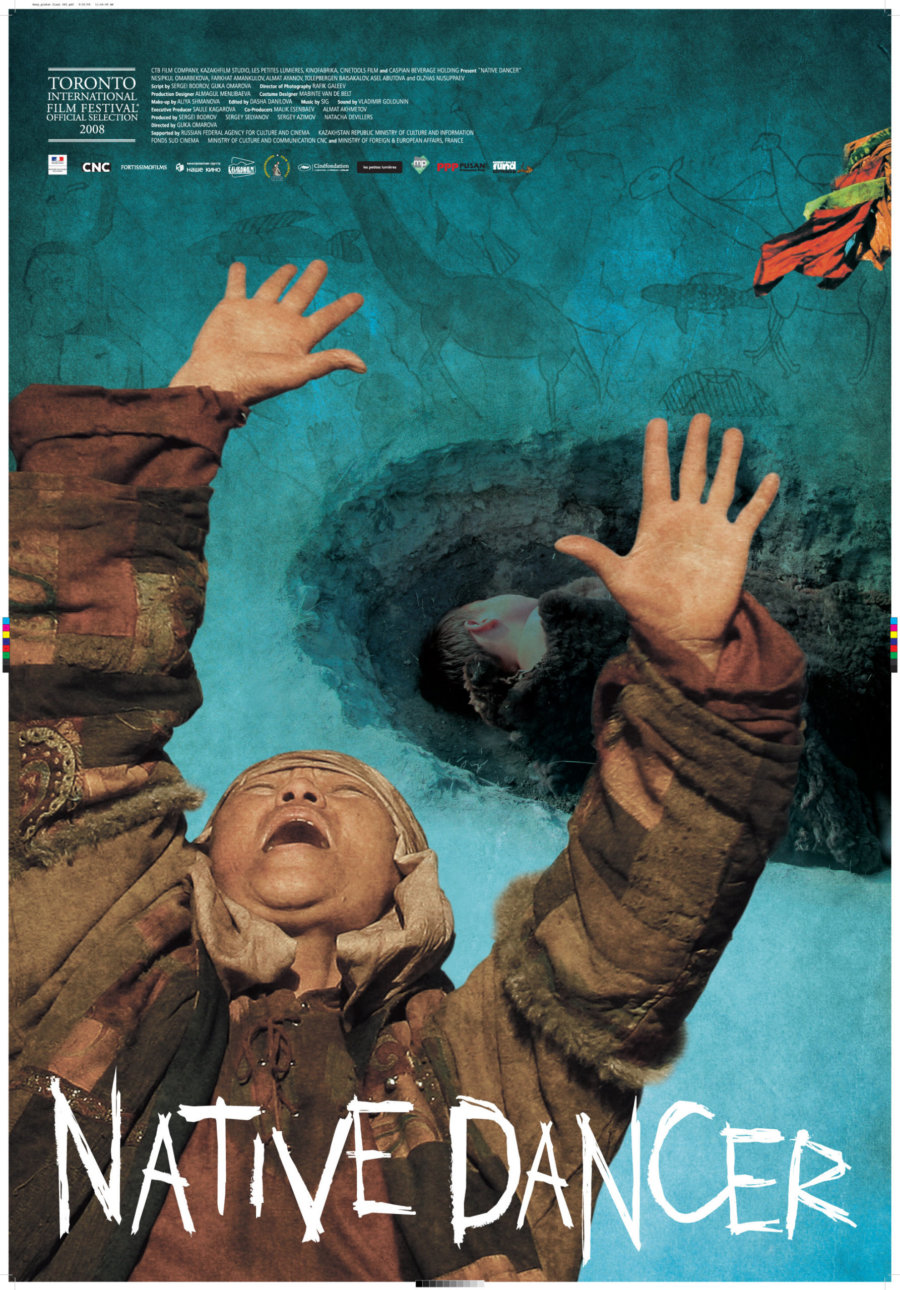 Gulshat Omarova’s second film after Shıza, and second collaboration with Sergei Bodrov, Sr, is the 2008 movie Baksy. In English, this title is somewhat ineptly translated as Native Dancer, which doesn’t do justice to the double entendre in the title. Baksy Баксы in Kazakh means ‘shaman’, but in Russian, it’s a slang term for money (coming from the English word ‘bucks’). Even from the title we can see that Omarova is still developing the themes that she began with Shıza here: the ambiguities and ironies that face a Kazakhstan which straddles Kazakh and Russian cultures, as well as ways of life that are traditional and semi-nomadic on the one hand, and capitalist and post-Soviet on the other. But, whereas in Shıza Omarova was playful in exploring the ambiguities of the relationship between Kazakh and Russian – both in the interior life of her protagonist Mustafa and in his romantic involvement with the Russian Zinka – in Baksy it seems like Omarova has definitively chosen a ‘side’.

In the broad strokes, Baksy tells the story of a traditional aul centred around two people: the shady, Mafia-connected biznismen Batyr (Farhat Amankulov) and the elderly shaman Aıdaı (Nesipkúl Omarbekova). Aıdaı lives on the land owned by Batyr, on account of its mystical healing properties, and a small community has grown up around her. When a local crime boss, Arman (Nurlan Álimjánov) decides to move in on the property, it touches off a power struggle between the forces of biznis and the forces of nature. The SPOILER ALERT here applies for the next four paragraphs.

Aıdaı makes a living on her rented land, giving folk cures to those who come to her. These cures often involve a mixture of Islâmic prayers including the takbîr and repetitive chants, the entrance into the shamanic trance, the sacrifice of animals and the ritual use of their blood. Some who come to her include the wayward sixteen-year-old girl Gauhar (Asel Abutova), and Mustafa (Oljas Nýsýppaev) and Zina (Olga Landina – uncredited) who make a cameo reprise of their rôles in Shıza. There are some semi-permanent fixtures of Aıdaı’s aul that we see as well, including Toha (Tolepbergen Baısakalov), a lazy, cowardly, beer-swilling and pool-playing scoundrel whom we first see down a makeshift oubliette for an unspecified offence, but who normally does odd manual tasks for the shaman.

Aıdaı’s uneasy relationship with the wealthy Batyr comes to a head when Arman attempts to strong-arm her off the land so that he can build a full-serve filling station and nightclub where her aul is. Toha starts sleeping with Gauhar – and Aıdaı beats him for it. The police find out about it, which – having been bought off by Arman – is all the excuse they need to evict Aıdaı from her property. Aıdaı goes into a trance and falls down, seemingly dead. The only one who sees that she is not in fact dead, is Batyr’s young son Asan (Almat Ayanov). Arman moves in at once, has the aul all but demolished, and promptly builds the filling station and nightclub, a gaudy joint named ‘Las Vegas’.

The only people who stay on the ruined aul are Toha and Gauhar. Toha gets into a fight with Batyr over his having sold out the shaman, and Batyr himself begins to have second thoughts about the whole enterprise when Asan tells him that he’s seen Aıdaı alive. When Batyr refuses to congratulate Arman at the celebration of the opening of his nightclub, the two of them have a falling-out. The following night, Toha witnesses one of the fake, electric-lit palm trees suddenly and inexplicably come crashing down, starting a petrol fire which completely destroys both the filling station and the nightclub. Arman learns of the destruction and promptly blames Batyr – demanding that the landowner pay half a million dollars to recoup the losses. When Batyr refuses to pay, Arman sends two thugs to kidnap Batyr’s son Asan after his boxing lessons, and the film takes a sharp turn from the supernatural into bog-standard Russian crime thriller territory.

Batyr recruits Toha to track down the baksy if she’s still alive, and gets the boxing instructor and some of the older students at the dojo on board to help him. He delivers the money, only for Arman to renege on his promise to release his son and demand another half a million dollars. When Toha at last finds Aıdaı, the first thing she does is start beating him with a stick, but once she learns what has happened to Asan she goes into a trance and shows Toha where he’s being kept. Batyr, the boxing teacher and the older students hijack the SUV of one of Arman’s henchmen and have him lead them to his hideout, and he rescues his son after a shootout that leaves both Arman and Batyr dead – but Asan, who witnessed the bloodshed, becomes traumatised to the point where he cannot speak. Asan is taken back to the aul, where Toha and Gauhar help Aıdaı conduct rituals to help Asan work through his trauma and mourn his father.

There’s a lot going on in this movie, with the central character of Batyr here representing the internal struggle for the Kazakhs between outward material wealth and Western notions of ‘progress’ as represented by Arman, and the spiritual connectedness of Kazakhstan’s præ-Islâmic shamanic past as represented by Aıdaı. Omarova makes no bones about which side she sympathises with; there is as much a moral contrast between Arman and Aıdaı as there is a contrast in the languages they use or the clothes they wear. She does little to glamourise or romanticise the shaman’s rôle in the community – or, for that matter, the shortcomings of that community itself. Toha and Gauhar, although they remain the most loyal to Aıdaı and Asan by the end of the film, are still remarkably flawed: it’s their indiscretion that gives the police a pretext to raid the aul in the first place.

On the other hand, there is no redeeming quality in the mobster life, despite its naked opulence. Omarova does her level best to portray the encroachment of biznis onto Kazakhstan’s native traditions as superficial, and marked by cupidity and decadence. Other reviewers have remarked on the discrepancy between the vast Kazakh landscapes and the Lexuses, Bimmers and Benzes that the characters use. This discrepancy is clearly deliberate. There is certainly a remove between Baksy and a film like Brat, but there are interesting parallels as well. Omarova wants to draw our eye to the contrast between the healthier, authentic vices of ordinary or even ‘bad’ Kazakhs like Toha – drinking vodka out of dusty glasses, playing pool, screwing around in a yurt – and the sterile shallowness of the nightclub glitz. Everything about the nightclub seems fake: it literally has a flat façade that makes it look like a stage prop; it’s decked out in electric lights and fake palm trees. It’s on account of these that it literally goes up in flames.

Progeny seems to play an important thematic rôle here, as it did for Scorsese in his 2006 remake of Infernal Affairs, The Departed. Batyr has a son – but that son is under the care of Aıdaı for most of the film, and we never see Batyr have any genuine connexion with his heavily made-up, shades-rocking, high-heeled girlfriend. Likewise, even though Arman is surrounded by girls, he clearly has no one he can leave a legacy to. On the other hand, Toha, despite having a number of venial faults, gets Gauhar pregnant: and by the end of the film, Toha and Gauhar seem to be acting as Asan’s surrogate parents.

The film suffers somewhat in that it doesn’t really own up to being a gangster film until about halfway through, and the result is something that stands halfway between the introspective criminal drama of the previous year’s Réketır, and the beautifully-bleak magic realism of the following year’s Kelin, without really managing the depth of either. At the same time, the cinematography and lighting are excellent, and the camera lingers lovingly on the steppe, the dusty rural roadscapes, the edifice of the mosque, equally as it explores in palpable excitement the controlled chaos of the bazaar. The fight choreography isn’t as well-executed as in Shıza, sadly, and most of the acting seems fairly wooden – with the exception of the young Almat Ayanov’s precocious insight and Tolepbergen Baısakalov’s expert comic timing. Is it worth a watch? Sure. But there are certainly better films in the same genre.