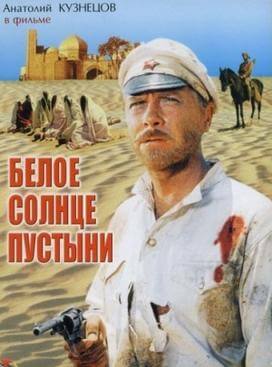 I had forgotten just how much I love this film – the first Soviet film I ever watched as a callow youth of twenty-two. That’s to my chagrin. Still, I can and will celebrate the fiftieth anniversary of the first release of Vladimir Motyl’s directorial masterpiece in 1970. It is traditional for Soviet and Russian cosmonauts to watch Beloe solntse pustyni (White Sun of the Desert) before launch, as a good-luck charm. That has something of an ironic echo in my own case, since I first watched this movie in preparation for my ill-fated but quite formative trip to Kazakhstan in 2009. Now, over ten years later, of course I can look back on that whole episode with a smiling eye – and I can watch Beloe solntse pustyni with a bit more appreciation and grounding in the Western (and Ostern) genre’s conventions. With all due thanks, of course, to Rich Hall.

Beloe solntse pustyni takes place in the deserts of Central Asia, and follows one adventure in the life of a Red Army veteran of the Caspian Regiment ‘Ferdinand August Bebel’, Fyodor Ivanovich Suhov (Anatolii Kuznetsov) as he attempts to make his way home to his wife Katerina Matveevna (Galina Luchai) from his posting in Turkestan. On the way back he meets and rescues a man buried up to his neck in the desert – Said (Spartak Mishulin), a sharpshooter on a quest for vengeance against his father’s killer. In the next city he finds a Red Army detachment led by Rahimov (Musa Dudaev) as they’ve taken charge of nine women who were the wives of a certain cruel and vengeful Basmachi rebel captain named Abdulla (Kahi Kavsadze). Rahimov manages to convince Suhov to take the young women into his charge while he gets reinforcements, and he commandeers a local museum to shelter the women and fend off Abdulla until Rahimov returns. Suhov, and his young helper Petruha (Nikolai Godovikov) are left to their own devices, appealing – at first unsuccessfully – to the local customs officer, Pavel Vereshchagin (Pavel Luspekaev).

There’s a great deal to appreciate about this iconic film, justly considered a cult classic and beloved by generations of Russians. The premise of the film, to begin with, is Homeric in tenor: Suhov, the veteran of a great expedition to the East, finds himself wandering back home with small hope of return, yet vividly remembering and cherishing the memory of the Penelope to his Odysseus, his wife Katerina – to whom he composes mental letters, which serve as narration in the film. And on his travels he faces trials and temptations both, all of which seem to offer contemporary parallels to the monsters and beauties which grace the Odyssey. When I watched this film many years ago I lavished praises on the character of Said, whose laconic charisma and sang-froid is even now quite compelling to me. But despite his continuing ‘coolness’ as the hired gun who never misses, I’ve found that the other characters in the film, particularly Petruha and Vereshchagin, have taken on intriguing dimensions and meaning in light of a classical reference which I had little conception of on my first watch.

If there is a Greek chorus to observe Suhov’s feats, actually, it’s a silent one – but no less eloquent for all that. The four aqsaqaldar, literally white-bearded old men, who sit by the wall on the Caspian seaside hardly say a single word the entire time, but they are there watching, often with patient bemusement, all the outlandish and violent events unfold in front of them. As seems appropriate in a film like this, there is a deliberate contraposition of the bleak desert with its vast dunes and rugged stone architecture with the idyllic, green and red flower-covered meadows of Suhov’s home with his beloved Katerina standing patiently among them, only glimpsed in flashbacks or daydreams. (Suhov spends a lot of his time on screen reclining or napping on the sand, often to comic effect.) The colour schemes are entirely different, and they offer us tantalising hints into Suhov’s inner psychology and motivations.

As seems to be a commonplace in Westerns, the weapons are reflections of the characters of the people who wield them. Suhov wields a Nagant revolver, while Abdulla wields a Mauser C96 – the weapons of ‘gentleman’ cavalry officers. The ill-fated Petruha wields a rifle with a bayonet attached, which never manages to fire except on accident. The Basmachi bandits all wield carbines. Vereshchagin either fights with his bare fists or hurls sticks of dynamite – both a testament to his temper and a foreshadowing of his tragicomic demise. Said, the survivor, successfully improvises with whatever is closest to hand, whether it’s stealing an enemy’s gun or throwing a knife.

The relationships between men and women are another filmic motif: Suhov’s devotion to his wife notwithstanding, his suddenly being placed in charge of Abdulla’s harem, together with a green youngster who clearly has no experience with women, places a significant temptation on him, as we are made to see through his daydreams. The fundamentally decent Suhov represents a familial ethic which is new and Soviet as far as his charges are concerned: one woman for one husband, and one husband’s affections for one wife. Suhov gains the attentions – or at least curiosity – of one of Abdulla’s burqa-wearing wives, the fifteen-year-old Gúlchataı (Tatyana Fedotova), whom Petruhov also admires despite not ever being able to see her face. Gúlchataı struggles to understand the benefits of Christian-slash-Soviet monogamy, seeing the lot of a single wife in charge of an entire household’s chores as drudgery – but it also seems she’s the most receptive to the idea. This motif of a progressive versus an Islâmic-patriarchal understanding of sexuality does not actually shy away from subtly ribbing the Soviet position. Suhov posts big red propaganda posters around the museum reading – in Russian – things like ‘Women are human beings too!’ But at the same time, Suhov does occasionally entertain the fantasy of keeping a harem, with Katerina as the chief wife and supervisor…

And then there is the relationship between Vereshchagin and his own wife Nastasya (Raisa Kurkina): the old customs officer is torn between a certain degree of domestic security, bought at the cost of compromises with Abdulla’s gang at the behest of his wife, and his formerly glorious and daring military past – which is symbolised in the film by a kind of sæcular iconostasis on one wall of the customs-house, with paintings and lithographs, maps and old photographs – these of himself with his much-younger wife in his military attire and medals. There are hints and flashes of the old fire in Vereshchagin, and these are brought out mainly by his meeting with young Petruhov, to whom Vereshchagin takes an instant liking. It is strongly implied by the film that Petruhov reminds Vereshchagin of his own deceased son, whose military grave is far-off and unattended. Vereshchagin is also the one who strums and sings the folk song ‘Ваше благородие, госпожа Разлука’ quoted above, and which forms something of a theme for the film. It reflects also something of Vereshchagin’s predicament, being estranged from his old home, being unlucky in death but lucky in love with a devoted (but somewhat smothering and overprotective) wife.

The overall tone of the film is light, however – even comic. It is brisk-paced, well-choreographed with regard to the gunfights and standoffs, and has the benefit of never taking itself too seriously, allowing for its saturnine humour and its immortal one-liners: ‘The East is a delicate matter,’ for instance; ‘His grenades are the wrong type!’; and ‘Save at least one bullet, Abdulla, to shoot yourself!’ The main locations for filming were Dagestan (on the other side of the Caspian) and Turkmenistan for a few of the desert scenes. Luga, south of Saint Petersburg, was chosen for the pastoral location for shooting Suhov’s daydreams and flashbacks with Katerina. The palette for the film is notably warm, even gaudy, when compared with other films of the time. This is counterbalanced by a certain staid realism in the cinematography: lots of slow pans and flat, static takes, allowing the audience to have the same sort of ironic detachment from the action that the aqsaqaldar have, sitting outside in the sun.

If it weren’t already obvious, I consider Beloe solntse pustyni to be fully deserving of its status among the classics of Soviet film, full stop. Not for nothing was it added to the register of culturally significant films in Russia in 1998! It can easily bear the comparison to any Western of its time. It’s shot against starkly beautiful Caspian desertscapes. Its characters are all entirely and understandably human – even the homicidally jealous villain. It hits just the right notes of comedy and melancholia, action and emotion to solidify its place in cinema, and its classical literary moorings take it just that extra step beyond into the category of high art. This one’s absolutely a keeper.