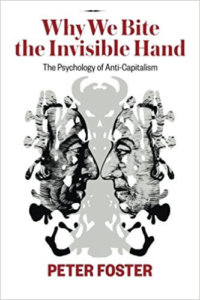 Why We Bite the Invisible Hand: The Psychology of Anti-Capitalism. Peter Foster. Pleasaunce Press, 2014.

In a nod to Adam Smith’s famous metaphor, Peter Foster asks why we persist in biting the invisible hand. Good question. Why do so many people, in the midst of the greatest prosperity ever produced in human history, insist on condemning the very economic system that has in many ways improved their own lives and billions of others? Why, in other words, is bourgeois bashing such a popular pastime among so many bourgeois elites? Only an individual capable of convincing himself that he is a poached egg can deny the obvious: since around 1820, free enterprise has helped to create more wealth, health, security, and general well-being than any other economic system. Life on earth has never been better.  And yet for at least two centuries free enterprise economics has been demonized as a force of human greed laying waste to the general society and the environment. Even though central planning has proven to be a failure, it remains the favorite default mode for those who despise free enterprise. Advocates of centrally planned economies and centralized governmental authority see in enlightened bureaucracies the only way to successfully engineer market outcomes in a top down manner – all while piously thundering against those who seek their own material benefit by helping others achieve the same.

There are always bumps along the way, to be sure, but the free market has a miraculous way of self-correcting and improving. In a free market, bad ideas often and eventually give way to better ideas, especially if the market is allowed to sift through innovation and goods with little interference beyond the preferences of individuals within a free market exchange system. No central planning bureaucracy is necessary for this bottom up system to work and to produce great results. But in order for this system to breathe, however, individuals must be free to choose, to borrow a phrase made famous by Milton Friedman. Free enterprise resists governmental control in proportion to a central planner’s desire to control the behavior of individuals.  This is what Foster means when he argues that Smith’s “Invisible Hand” operates on free markets with the force of Darwin’s natural selection process. Left to choose, individuals come together in order to exchange goods, which in turn establishes supply and demand from the bottom-up, which in turn sets prices on goods and labor, and so on.  And yet, no matter the evidence, many on the left and some on the right continue to demonize capitalism as nothing more than a system that unleashes greed and selfishness. What explains this persistent anti-capitalist attitude? This is the question that Foster’s book raises and attempts to answer. Foster’s book is not about economics. It is an analysis of the misguided psychology that morally condemns capitalism as evil.

According to Foster, the anti-capitalist attitude cannot be understood as a simple failure to understand basic economics. Rather the failure to understand or appreciate free enterprise is rooted in moral sentiments. Building on the work of Hume, Smith and evolutionary psychology, Foster argues that the anti-capitalist’s ire toward free enterprise is shaped by primitive ways of thinking that privileges collectivist mores to individual empowerment. Anti-capitalists see economics through the lens of moral, rather than economic, spectacles.  Reason, as Hume suggests, is the slave of the passions. And the passion to condemn capitalism is an inherited morality from a bygone primitive era.  This explains, Foster argues, why arguments for capitalism and the evidence of its success fail to prevail upon those wired to despise capitalism. The problem lies in their moral imagination, not economic or political reality.

According to Foster, the morality of anti-individualism developed out of primitive tribal attitudes in response to primitive social and economic conditions. Our oldest ancestors (hunter gathers) viewed natural resources as stubbornly limited. This primitive perspective of scarcity produced the moral view that an individual attempting to improve his individual situation was greedy and therefore jeopardizing the tribe’s existence by seeking to improve his own good at the expense of the tribe’s good. Tribal mores and religion arose, in other words, as a powerful moral and psychological restraint upon those perceived as putting themselves before the tribe.

This deeply rooted tribal contempt for individual empowerment, however, is at odds with the individualism inherent in modern free markets and Smith’s notion of an “Invisible Hand,” which is an expression of the liberty of every individual to engage in voluntary exchange to improve themselves. The pursuit of financial independence, as Smith and Foster see it, is not necessarily at the expense of others. Rather wealth creation lifts everyone’s general well-being along the way, since the precondition for wealth creation is the division of labor that employs countless individuals in an uncoordinated matrix governed by the “Invisible Hand” of markets.

Another characteristic of tribal moral sentiment, according to Foster, is the drive to control the behavior of others.  The lust to control others, however, is cloaked in the guise of a pious concern for the common good. In practice this inherited element of primitive moral sentiment manifests itself in the drive to centralize coercive control over individuals and their economic activities. For Foster, however, the system of free enterprise is not entirely rooted in rational individualism, as Ayn Rand and her Objectivist followers mistakenly believe (see chapter five of his book for his critique of Rand), but is rather a system of economics in which individuals enrich others by enriching themselves through a system of cooperation and peaceful exchange of goods and services. Free enterprise creates a climate in which entrepreneurs are richly rewarded for improving the material lives of others.  It is a variation of Mandeville’s formula that private vice makes for public virtue. The results are nothing short of grand, as billions of people around the world are lifted out of poverty and misery through the efforts of the free enterprise system.

The success of capitalism, not to be confused with mercantilism or crony capitalism, flies in the face of two centuries of unrelenting attacks on free enterprise as the bane of human existence. Those who continue to portray capitalism as a monstrosity impose on society the moral outlook of an inherited primitive morality. The problem is not economics, but in how those who despise capitalism see the world. In their misguided quest to shape society along a primitive outlook of tribal collectivism, anti-free enterprisers are at odds with the system that has done more good around world than harm, argues Foster. The morality of anti-capitalists and its political corollaries, centralization and government overreach, squashes the freedom necessary for the Invisible Hand to produce results efficiently. By focusing on the work of Hume, Smith, Darwin, Hayek, and countless others, Foster provides the reader with an excellent account of the nature of free markets and why they produce great results.

The limited space at my disposal makes it impossible to do this book justice. It is full of important and thoughtful insights, is a joy to read, and is downright charming in its personal approach to the author’s intellectual journey to answer questions that perplex him. If there is one limitation to this work, however, it is that while it does an excellent job of explaining the primitive, tribal objections to individualism and free enterprise, it does not address itself to more intelligent objections to individualism and capitalism from the likes of Rousseau, Tocqueville, and others, who presumably are far more intelligent than our tribal ancestors. One example ought to suffice. In his classic work, The Old Regime and the French Revolution, Tocqueville makes the follow stark observation:

“When men are no longer bound together by caste, class, corporate or family ties, they are only too prone to give their whole thoughts to their private interest, and to wrap themselves up in a narrow individuality in which public virtue is stifled. Despotism does not combat this tendency; on the contrary, it renders it irresistible, for it deprives citizens of all common passions, [ix] mutual necessities, need of a common understanding, opportunity for combined action: it ripens them, so to speak, in private life. They had a tendency to hold themselves aloof from each other: it isolates them. They looked coldly on each other: it freezes their souls.”[1]

As individuals retreat from public life to pursue their private economic interest, they create a void of political participation that a tutelary governmental power is all too happy to fill. Immediately after the above passage, Tocqueville adds:

“In societies of this stamp, in which there are no fixed landmarks, every man is constantly spurred on by a desire to rise and a fear of falling. And as money, which is the chief mark by which men are classified and divided one from the other, fluctuates incessantly, passes from hand to hand, alters the rank of individuals, raises families here, lowers them there, every one is forced to make constant and desperate efforts to acquire or retain it. Hence the ruling passions become a desire for wealth at all cost, a taste for business, a love of gain, and a liking for comfort and material pleasures. These passions pervade all classes, not excepting those which have hitherto been strangers to them. If they are not checked they will soon enervate and degrade them all.”[2]

Tocqueville’s concern can hardly be characterized as primitive or tribal. He is concerned with the fate of political liberty in a commercial society. Political liberty results from civic life, not commercial activity. Civic spiritedness connects individuals to their fellows in a shared passion for freedom from despotism. Political passion, however, is undermined by devotion to personal economic gain, which can only be realized by abnegating one’s role in civic life.

Foster has little to say about political existence other than to warn against the failures of centralized economies.  Tocqueville, by contrast, is concerned with political liberty, which is the only bulwark against despotism. But he feared that in a society of individuals pursuing their own private commercial good, habits conducive to civic life would erode as a general malaise about government sets in.  He shares Foster’s concern with the dangers of centralization of power, but unlike Foster, Tocqueville warns that individualism and the pursuit of wealth may deaden the public spiritedness necessary for thwarting despotism, as political liberty rests on civic not economic activity. If scarcity engenders mutual dependency on others out of sheer necessity, opulence and individualism may separate citizens from the necessity that binds groups together and therewith potentially give rise to a “what do I care?” attitude about politics and the public good.

Foster is correct to defend free market oriented attitudes against the salvationist mantras of the centralization of governmental crowd in order to understand the latter, but it is not exactly clear (at least to me) that he grasps how the spirit of individualism and the pursuit of wealth may unintentionally leave the door open for the very political despotism he wishes to avoid.

Khalil Habib is an Associate Editor of VoegelinView and Associate Professor of Philosophy and Director of the Pell Honors Program at Salve Regina University in Rhode Island. He is editor, along with Lee Trepanier, of Cosmopolitanism in the Age of Globalization: Citizens without States (Kentucky, 2011).