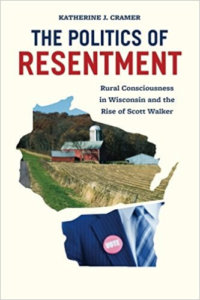 The Politics of Resentment. Rural Consciousness in Wisconsin and the Rise of Scott Walker. Katherine J. Crammer. Chicago: University of Chicago Press, 2016.

Why do the white working class support Donald Trump, with his vicious remarks, psychopathic personality, and mixture of pro and anti-government policies? Is it, as Thomas Frank and most Democrats believe, that they are hoodwinked by anti-elite conservatives who use cultural issues like abortion and same-sex marriage to cover economic policies that are contrary to their interests?[1] Or is it a moral decline, along with economic disenfranchisement, as Charles Murray claims, where traditional values like religiosity, industrious, and family have been minimally retained by the upper class and disregarded by the lower?[2] Whether the reason, the result is that Americans now self-segregate by cognitive skills and lifestyle that divide them not only economically but socially and culturally. The clustering of like-minded Americans is tearing the nation apart into blue and red communities where people no longer talk with those whom they disagree.[3]

Instead of recycling the stereotypes of Red America, Katherine J. Crammer, a Professor of Political Science at the University of Wisconsin-Madison, actually decided to visit and listen to these people in over two dozen rural communities over a period of five years. What she discovers is “a politics of resentment” towards one’s fellow citizens, a resentment that is partly based in economics but mostly explained by cultural and political issues where urban elites are perceived by rural people as receiving more than their fair share, disrespecting rural values, and imposing policies upon rural communities even if they seem to be contrary to common sense. Place consequently plays a critical role in Crammer’s account of rural consciousness to explain the social, cultural, and political divisions in Wisconsin.

The book has eight chapters and three appendixes: a map of Wisconsin, a description of the groups interviewed, and the list of questions used during observation. The first chapter is the introduction of the book; the second chapter is an explanation of the methodology; and the third describes the main components of rural consciousness as 1) a perception that rural areas do not receive their fair share of decision-making power; 2) they are distinct from urban and suburban communities in culture and lifestyle, which are not respected; and 3) rural areas do not receive their fair share of public resources. Unlike Frank and Murray, what Crammer concludes is that rural people’s resentment come from a combination – as opposed to any one single factor – of political, cultural, and economic issues.

In chapters four, five, and six, Crammer analyzes whether the facts support these perceptions. Although per capita allocations do not consistently support these views, the nature of the challenges facing rural areas are not addressed or understood by urban elites which creates a reasonable basis for these perceptions. For example, the need to drive long distances in rural areas is ignored when state legislators raise the gasoline tax; the central role that schools play in rural communities is neglected when unfunded mandates are imposed upon them; and the financial and cultural inaccessibility of public universities like the University of Wisconsin-Madison to rural students lead to resentment rather than pride in these institutions. These perceived grievances provide fertile grounds for arguments in favor of less distribution, smaller government, and dislike of public employees. Thus, it is not libertarian ideology but the resentment towards other citizens that lead rural people to favor these conservative policies.

Chapter seven shows how rural consciousness structured people’s understanding of the Great Recession, Barrack Obama, and Scott Walker. Because of resentment towards their fellow citizens, especially against public employees, rural people do not blame Wall Street for the Great Recession but instead hold the government to be accountable. Even when the government presented its stimulus package, rural people were opposed to it because they believed, as rural communities, that they were unlikely to feel the effects of it. The resentment against Obama was less about his race than his support for big government programs, whether the government stimulus or health care, making him seem just like any other politician who has neglected, disrespected, and ridiculed rural America. By contrast, Scott Walker, who also came into power during the Great Recession, used their resentment to his advantage by restricting public employees’ collective bargaining. Although urban people and students protested against Walker, the governor won both the 2012 recall election (the first American governor to do so) and his reelection campaign in 2014 by relying upon rural support.

The book concludes by stressing the importance of place in public opinion and communal consciousness, a factor that is often ignored by our national elites (e.g., “fly-over country”). This neglect structures people’s understanding of politics and feeds into a politics of resentment whether against one’s fellow citizens in state capitols or far-away metropolitan centers like Washington D.C., New York, or Silicon Valley. Crammer’s book shows us that class is not merely a Marxian construct but a combination of culture, economics, and place. It is a correction to the partially correct but somewhat misguided accounts one finds in Frank, Murray, and Bishop and provides a plausible theory why the white working class, at least those in rural America, supports Donald Trump.

[1] Thomas Frank. What is the Matter with Kansas? How Conservatives Won the Heart of America. New York: Henry Holt, 2004.

[3] Bill Bishop. The Big Sort: Why the Clustering of Like-Minded America is Tearing Us Apart. Boston: Mariner Books, 2009.

Review of Liberty, Individuality, and Democracy in Jorge Luis Borges

Crisis and Constitutionalism: Roman Political Thought from the Fall of the Republic to the Age of Revolution