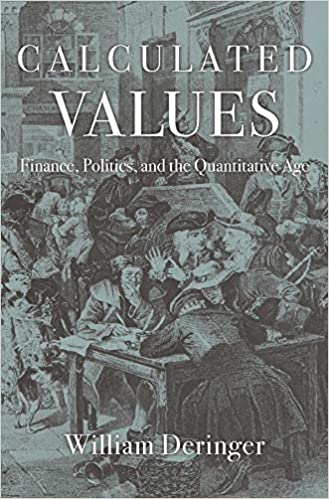 How is that we are beholden to numbers? We view the world as counting, measuring, and calculating in order to understand and judge it, whether in economics, politics, criminal justice, education, or health. William Deringer’s Calculated Values accounts for this special authority that quantitative thinking holds in modern culture by studying its historical origins in eighteenth-century Britain. According to Deringer, numerical calculations gained its authority not only because they seem to be true but also because they are a result of complex social processes shaped by human values and conflict. In his study, he shows how numerical calculation has both worked and failed in political life and what we can learn from it to help us use numbers more effectively in the future.

Before going any further, it is worth clarifying what Deringer means by calculation. For him, calculation is a way of thinking that ranges from basic arithmetic to elaborate financial models. It is a practice, an activity, that people do. Thus, the book is not a history of mathematics, numeracy, statistics, or data; rather, it is a study about numerical values: how humans think numerically in order to discover an objective reality and to gain an advantage. This tension between objectivity and self-interest is described throughout the book and it is this human element, with its personal, cultural, and political aspects, that Deringers explores.

The emergence of calculation during Britain’s Glorious Revolution is a crucial episode in civic epistemology: the social and institutional practices by which political communities construct, convey, and deliberate about relevant political knowledge. This body of knowledge is not only grounded in constitutional structures but in informal beliefs, values, and traditions. For example, public knowledge in Germany relies upon institutional committees to achieve a consensus while in France deference is given to experts. Deringer’s contribution is to show how numerical calculation became part of the fabric of political life in Britain regardless of individual, issue, or ideology.

Key to the rise of calculation in British political life was its culture of dispute where calculation proved useful as a form of rhetoric to persuade people about commerce and finance. Those who invented and were influencers of this type of thinking – Charles Davenant, Archibald Hutcheson, Richard Price – were adherents to republican political philosophy that valued transparency and suspicious of the concentration of state and financial power. Those in government did not consider numerical calculations important since they already benefited from their official positions. It was political outsiders, those who engaged in political criticism by numerically assessing the efficiency and ethics of government leaders, that invented and adopted numerical calculation.

Soon dueling calculations became a common feature of British political life after the Glorious Revolution of 1688 with extreme partisan polarization and a relatively unrestricted press. Numerical calculation was useful because it offered politicians and their public supporters a way to render technical policy disputes into pointed arguments. William Pulteney sought to demonstrate the failure of Walpole’s fiscal policy by calculating the national deb had risen 7.8 million pounds under his management. Numerical calculation also was flexible in that the same public data could be deployed to construct different analyses and policy positions. But because the data was public there were limits to what calculations could be made. While the calculative battles rarely reached conclusive answers, it opened a new way to critique politics that included educating the public about calculative thinking and looking for new sources of knowledge and how to calculate them. Eventually this calculative combat became part of Britain’s civic epistemology and gained newfound authority in public life.

For Deringer, the revolutionary political event of 1688 triggered this culture of calculation. The Glorious Revolution transformed how political leaders thought about political problems with numerical calculation emerging as the mode of political thinking and arguing. After 1688 a series of Parliamentary acts delimited the authority of the monarchy, which required members of parliament to deliberate over technically complex questions like public expenditure, trade regulation, the stock market, the national debt, and taxation. This was a shock to the existing patterns of civic epistemology and opened up a new way of thinking and knowing to gain influence.

Furthermore, the highly partisan polarized age led to political facts being seen as contentious, adversarial acts. It was often more valuable to show the other side wrong than being shown right. But this relentless antagonism also led to a pursuit of political knowledge where political claims were subject to a high level of scrutiny. Like today in the United States, questions of evidence, methodology, and epistemology were a regular feature of political combat. This in turn made calculative thinking, particularly quantitative arguments, all the more attractive.

Finally, the development of a print culture in the press, which was accelerated after Parliament refused to renew the Licensing Act in 1695, flourished in Britain where Habermas referred to this period in British history as a new form of political life: the public sphere where private individuals came together in open, rational conversation independent from the state. However, contrary to Habermas’ idealization, this public discourse was nasty, offensive, and conspiratorial. Britons were constantly on guard against being deceived and conspiracy plots were part of the common political discourse of the time. To counter this, calculators used numbers to “undeceive” the public because they were seen as objective and rational. But, as Deringer shows, calculators themselves were just as unscrupulous and unreasonable as their audience. Nevertheless, they were able to imbue numerical thinking with a new authority in British political life.

Deringer’s account about the rise and adoption of numerical thinking in Britain’s civic epistemology focuses on a few key episodes of transition and controversy in political life: Secretary of the Treasury William Jephson’s “secret service” payments that had distributed hundreds of thousands of pounds of public money with no public record; the “Great Project Equivalent” when England agreed to make a large monetary payment to compensate the Scottish people for accepting higher taxes after their union; Whig and Tory battling over the balance of trade between Britain and France; the careers of calculator entrepreneurs John Crookshanks and Archibald Hutcheson; and the infamous 1720 South Sea Bubble where Hutcheson’s calculations were used to prove that the Company’s leaders had knowingly deceived the public and where Walpole’s government response used calculation to transform the cognitive practices of the British state, although Walpole himself later worried about that his fellow citizens might be too quick to believe any statement clothed and dressed in calculation.

Deringer concludes his book with David Hume and Richard Price. For Hume, the British public had become too captive by calculation: economic numbers were epistemologically unreliable and politically distracting. Political leaders could make numbers say whatever they want to support any position. By contrast, Price believed numerical information and mathematical reasoning offered the best defense against the uncertainties in political life. By making collective political life more rational, calculative thinking for Price made the nation freer and more virtuous.

After the eighteenth century, calculation began to be seen as boring and dull, being drained of its emotional energy. The replacement of entrepreneurial activity with state and business bureaucracies conducting calculation played a role in this change of perception as well as the new view that calculation was a mechanical mental activity detached from intelligence. Nonetheless, numerical information was still perceived as a public good and the government still ought to be held accountable according to numerical terms. Furthermore, Britain exported this civic epistemology to its colonies and was later adopted by the United States, where numerical thinking was – and still is – seen as the quintessential characteristic of American civic epistemology.

With the questioning of facts, news, and polling today, Calculated Values reassures us that we live in a time not so much different than before when numerical thinking first emerged in eighteenth-century Britain. The book is a tour de force of intellectual and social history to explain how numerical thinking became the way to understand the world. Original in its approach and sophisticated in its argument, Calculated Values will be of interest to those who want to understand the power of numbers and why numerical thinking matters in our politics and economics.