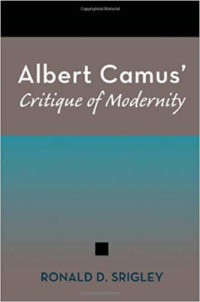 Albert Camus enjoyed making work plans, and filing his thoughts and writings under headings. He thereby built a structure with the Absurd as the first pillar. This major title included: an essay, The Myth of Sisyphus; a novel, The Stranger; and two plays, Caligula and The Misunderstanding – four works that were published between 1942 and 1944. Rebellion is the second pillar, around which gravitates, with symmetry to the first, an essay, The Rebel; a novel, The Plague; and two plays, The State of Siege and The Just Assassins – all published between 1947 and 1951. In both cycles, the Absurd and Rebellion, the essay – whether it be The Myth or Sisyphus or The Rebel – develops the underlying concept of the three works of fiction published in quick succession.

In the 1960s especially but still today, many scholars of Camus view the evolution of his works in terms of themes and break them down according to his own planning. Some look at the essays and draw on the myth references: along the Camusian trajectory they find Sisyphus, Prometheus and Nemesis. Sisyphus rolled his rock with all his might to the summit of the mountain only to let it roll back down and endlessly start the same fruitless and obstinate move over again, which in and of itself represents the absurd. Aeschylus’ character appears in The Rebel as the leader of the metaphysical rebellion. Nemesis, the Greek goddess of balance, inspired “La pensée de midi” that concludes The Rebel on an appeasing tone that allows love to blossom.

In the 1970s, this breakdown of Absurd/Rebellion or Sisyphus/Prometheus/Nemesis leaves a few critics perplexed. Edward Freeman says that on the one hand, the absurd and rebellion are inextricably linked in Camus’ works; and on the other hand, they are there continuously, they designate a continuous journey.[1] Laurent Mailhot picks up on that theme and considers Camus’ universe to be a whole: “les œuvres puisent aux mêmes sources”, he writes.[2] And those sources were selected very early on. From age 20 to 25 Camus finds his topics for reflection and builds a foundation that develops and becomes refined with clear focus.

In the 1980s, Brian T. Fitch used a narrower focus. He defends the independent existence and unique climate that make each of Camus’ works a success. That said, he responds not just to his predecessors mentioned above, but also to generations of critics who, from a synchronic perspective, address the works of fiction as though they depended on the essays, which shed indispensable light on the works. Fitch denounces this simplistic vision[3]. Such vision seems to apply to Sartre who was a philosopher above all and wrote novels to illustrate the theses presented in his essays, and plays to stage them. But Camus defined himself as an artist, even though he is also a philosopher in a broader sense: his works of fiction examine the philosophical rapport between man and the world, and inversely, his theoretical writings are driven by a prolific artistic sensibility.

Every successive position taken in the examination of Camus is well founded to a certain extent, and contributes to enriching our understanding of the famous author. At the end of the day, they are more complementary than contradictory. Accordingly, in recent decades, reviewers of Camus’ works have been more reluctant to use traditional analytic categories – whether they be thematic, mythic or generic – in light of the barriers they imply. They have also enjoyed the release of previously unpublished works, of which The First Man is the most significant, and whose reception heightened this reluctance.

With Albert Camus’ Critique of Modernity, Ronald D. Srigley joins in the exegetic filiation that began 50 years ago or so and is synthesized here, and which questions the meaning Camus’ body of work and its major positions. The table of contents suggests a return to the thematic breakdown with the first two of the three chapters respectively entitled “The Absurd Man” and “A History of Rebellion”. In addition, the Introduction talks about the Camusian production in terms of cycles. It reproduces this configuration that comes from the writer himself and from which recent reviews distance themselves.

However, the title of the third and final chapter, “Modernity in its Fullest Expression,” breaks away from conventional concepts. Srigley offers a new approach to reading the Absurd and the Rebellion by suggesting that there is an underlying general objective: Camus’ body of work as a whole seeks to put Modernity on trial. This claim is encompassing to say the least, and rather original to boot. However, its originality comes to light as it is developed: unlike many others who, over the chronology of the work, discern an intellectual progression emerging from the light of Nemesis, Srigley states that Camus’ review always plunges to the darker aspects of Modernity. What is more, according to Srigley, this review provokes a growing desolation in Camus, through to The Fall, because it is done with brutal honesty – which makes us think of Doctor Rieux’ honesty in The Plague and that which the latter prescribes to the journalist Rambert for his investigation.

But we have truly to understand what Srigley means by Modernity. The first understanding of his title and main concept might be different from what he intends, because Modernity does not mean the same thing in Literature as in Philosophy: it evokes almost the opposite in each. From an aesthetic point of view, Modernity (or Modernism) is the contrary of Progressivism; both have been two poles that have attracted artists, as well as critics and theoreticians, especially from the middle of the 20th Century onwards. Progressivism – with its models the German theatre directors Piscator and Brecht in the 20s, 30s and 40s, and the French scholars Roland Barthes and Bernard Dort in the 50s and 60s – dedicates art to a political cause (in a broad sense) and implies that art can have a significant impact on the evolution of a society.

The other pole, Modernity – with the Theatre of the Absurd, the Nouveau Roman, the commentators on these movements and a lot of historians of contemporary drama – does not believe in the value of any ideology; a political reading is not appropriate for its works, but rather a metaphysical and timeless interpretation. Due to his background, Srigley comes at Camus from a philosophical perspective; he heavily cites Plato, Aristotle, Augustine, Kierkegaard, Nietzsche, Sartre… and rarely cites literary authors. So he refers to the notion of Modernity without taking into account its aesthetic aspect. However, considering he makes Modernity a key concept, we fail to understand why Jeanyves Guérin’s highly informative work, whose title asks a very good question, is not among Srigley’s sources: Art nouveau ou Homme nouveau? Modernité et progressisme dans la littérature française du XXe siècle (Paris, Champion, 2002). Yet his bibliography does include several French scholars.

Srigley comes at Modernity as it pertains to its close link to Christianity, as a successor to Antiquity: he perceives it the same way in Camus. From the Greeks, Camus draws a love of life that is inseparable from the lucid acceptance of death, with no hope for an afterlife. However, a contrary phenomenon is implicit in Modernity and Christianity: the quest for a future, the Moderns’ “leap” that Camus refuses to make in The Myth of Sisyphus. Srigley establishes a relevant opposition between this progressivist quest for a future and the thematic of the present, since the sense of time is central to Camus’ body of work, albeit in a variety of literary forms, despite the evolution of his thinking. A taste for the present is vital for the writer, and takes on an ethical dimension. Srigley’s analysis is perspicacious.

However it would be more complete if it exploited the biographical origin of this preoccupation in Camus’ works, an extraordinary personal experience reflected in his writings: as soon as he turned 17, the young Camus received a diagnosis of tuberculosis with a prognosis of death. He created his own phrase to refer to his disease: “maladie métaphysique,”[4] because in his prime, it made him feel the threat of death with a tortured lucidity. Thus the teenager precociously measured the value of time, and his perception of which was suddenly heightened. The lover of life became therefore preoccupied with the present moment. Such attention to the present, that Srigley postulates as enjoyable in a fulfilling manner, is similar to Anne Prouteau’s in her book: Albert Camus ou le présent impérissable (Paris, L’Harmattant, 2009). This title contains a fascinating oxymoron: “imperishable present” like if the “here and now” was endless. From Anne Prouteau’s poetical perspective, Camus’ work reveals an awareness of the creative moment, of the present as a wellspring, a living source. Srigley could have broadened his perspective if he had consulted this book, which is indispensable for understanding the concept of time in Camus.

It is true that he broadens his perspective in other ways and does not analyse Camus in a vacuum. For example, in the first chapter of his book, he focuses on the state of mind depicted in The Myth of Sisyphus, in which a divorce occurs between man and the world, the actor and the stage: he uses Kierkegaard’s despair and the Sartrean nausea as penetrating illustrations “avant la lettre”. But he refers only to a short endnote to Camus’ review of Sartre’s first novel, in which Camus explains his agreement with the word “nausea”: Roquentin’s feeling is the body language expressing the unease of being aware of the Absurd. Srigley quotes Being and Nothingness also, which has in common with Camus a certain vision: without essence, because of his lack of being, man has no more substance than theatrical fiction, he is involved in a permanent performance, playacting is part of him.

The second chapter of Srigley’s book focuses on The Rebel. This one also uses evocative metaphors, including the ancient metaphor of shadow, which appeared as early as Homer and especially in Plato who created an antinomy by opposing shadow and being, reflection and reality, men’s cave and God’s light. Camus strongly reuses this allegory with its philosophical content and the idea of evanescence. Srigley’s third chapter analyses the novel The Fall (1956) and secondarily the collection of short stories The Exile and the Kingdom (1957). Other literary references include Kafka and Beckett for intrinsic guilt. Plato returns, this time for the theatrical metaphor, the idea of comparing life to theatre (of which the shadow is the prolegomenon). This particular relationship to the world underlies The Fall and The Exile and the Kingdom – and even more the play Caligula but Srigley says nothing about Camus’ drama. The Conclusion of the book analyses The First Man as a kind of reconciliation: in his last novel, Camus adopts a hermeneutic spirit that is in harmony with the world. The book leaves us with an appetite for the critique of Modernity that it brings to light. Camus’ body of work is abundant, so it comes as no surprise that Srigley only partially tackles it. However, we would be curious to see him apply his original point of view to the masterpieces The Stranger and Caligula. Perhaps there is more to come, in a series of articles.

Sophie Bastien is a Professor in the French Studies Department of the Royal Military College in Canada. She is author and editor of several books, with the latest being La Passion Du Theatre: Camus a la Scene (Rodop, 2011) and Camus, l'artiste (Rennes, 2015).