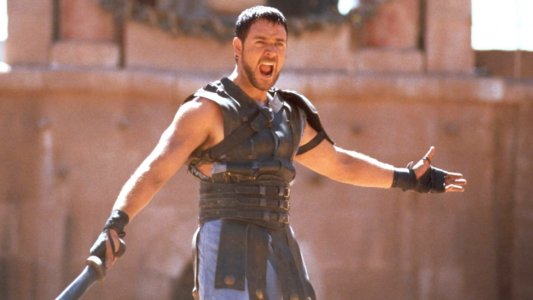 In Ridley Scott’s Gladiator, the philosophical emperor Marcus Aurelius makes a wonderful appearance. In this poetic portrayal of the truths of history, Marcus Aurelius (played by Richard Harris) chooses the fictional Maximus as his true spiritual heir, because his errant son Commodus is not a man of virtue as his father is.

The interesting question is whether or not this poetic portrayal is true to the Stoic philosophy of Marcus Aurelius or not. Even if the movie is not accurate history, it may still accomplish higher philosophic purposes, as Aristotle noted in his Poetics:

“The distinction between historian and poet is not in the one writing prose and the other verse—you might put the work of Herodotus into verse, and it would still be a species of history; it consists really in this, that the one describes the thing that has been, and the other a kind of thing that might be. Hence poetry is something more philosophic and of graver import than history, since its statements are of the nature rather of universals, whereas those of history are singulars. By a universal statement I mean one as to what such or such a kind of man will probably or necessarily say or do—which is the aim of poetry, though it affixes proper names to the characters; by a singular statement, one as to what, say, Alcibiades did or had done to him.”

John Sellars, in a paper on “Stoics on the Big Screen,” argues that Maximus’ behavior in the film is in fact un-Stoic. Maximus is driven by emotion and acts in ways that can hardly be said to characterize a true Stoic. Mr. Sellars contends that in fact it is Proximo, the man who runs the gladiatorial school (played by Oliver Reed in his last screen appearance), who utters the most Stoic-sounding lines of dialogue and who genuinely lives his life in a way that is recognizably Stoic. In short, Maximus’ creed of “strength and honour” seems merely generically Roman, whereas it Proximo’s creed of “shadows and dust” that seems more properly Stoic.

But William O. Stephens, in an article called “The Rebirth of Stoicism?” that was published in originally published in Creighton Magazine (Winter 2000): 34–39, points to the fact that Commodus in the film “lacks prudence, fortitude, temperance and justice—all the virtues Maximus possesses.” Thus, Maximus is the veritable Stoic protagonist who embodies for the audience a universal poetic expression of higher philosophic truths:

“Maximus’ determination to survive with courage, honor and dignity—the general who became a slave, a gladiator and finally the hero who defeats the evil tyrant—makes him the movie’s inheritor of Marcus Aurelius’ Stoic philosophy.

Does this renewed interest represent a rebirth of Stoicism? Is 21st century America, with its glorification of power, possessions, fame and money, ready to embrace a philosophy that places greater emphasis on virtue and justice? Perhaps in this time of presidential indiscretions, easy access to pornography on the Internet and confusion over social values, Stoicism’s time has come again.” – (Stephens, “The Rebirth of Stoicism?”)

While Mr. Sellars’ evaluation seems to be correct in terms of the “letter” of Stoicism to be found in the film, nonetheless Mr. Stephens seems to capture a truth about the “spirit” of Stoicism that the film communicates. In other words, historical accuracy about who is or who is not a precise exponent of Stoicism seems to be beside the main artistic point. As Aristotle observed, the poet conveys universal philosophic truth, but not by precise historical depictions.

We may perhaps view the film Gladiator as a poetic articulation of Stoicism only in its artistic effect as a coherent, experienced whole. That is, its composite effect is to impart a feeling of what living according to Stoic virtue might be. On this interpretation, then, both the characters Maximus and Proximo, as well as others, function to produce a composite impression in the viewer about a Stoic approach to life.

The legitimacy of this interpretation is perhaps best proved by looking to the end of the film. Even if Maximus has not been living as an explicitly Stoic practitioner of virtue, at the end of his life he seems to accede to the Stoic vision of reality. As he dies, he may be seen as offering his life in a way that reconciles his past way of living with a wider Stoic view of things, which of course other characters in the film help both us and him more clearly see. Yet it is only with the dramatic death of Maximus that those previous, fragmentary suggestions strike us as a convincing and coherent vision of the whole of reality.

In other words, Maximus undergoes something of what may be termed a gladiator’s “deathbed conversion” to Stoicism. This seems to be the real significance of his cinematic character arc. When he dies, he actually does die as a good Stoic. And strictly speaking, for a Stoic, having been prepared to make a good death is all that matters. One lives rightly at last, by finally being prepared to die rightly, at last.

The strongest argument I can offer in support of this thesis is that one of the best Stoic lines of dialogue in the film is in fact given to Maximus and not to Proximo. Moreover, it is a line of dialogue in which Maximus is repeating and, more significantly, appropriating for his own heartfelt understanding a profound lesson that he learned from Marcus Aurelius himself. Maximus says:

“I knew a man who once said, ‘Death smiles at us all. All a man can do is smile back.’”

While some have attributed this quote to the imagination of the screenwriters, alleging that no such words are to be found in the writings of Marcus Aurelius, I submit to you that this is simply not true. The words are in fact a poetically accurate paraphrase by Maximus of something that Marcus Aurelius says at the very end of his Meditations, in the last line of Book XII, Chapter 36.

The difficulty that people have had in recognizing Maximus’ saying as authentically from Marcus Aurelius may stem from the fact that the English translations of it vary widely:

“Go then in peace: the god who lets you go is at peace with you.” (trans. M. Hammond)

“So make your exit with grace — the same grace shown to you.” (trans. G. Hays)

“Depart then with a good grace, for he also that dismisses thee is gracious.” (trans. C.R. Haines)

“Depart then satisfied, for He also who releases you is satisfied.” (trans. G. Long)

Strangely enough, the best translation of this immortal end line (both for Maximus and for Marcus) seems to be found in Hans Urs von Balthasar, who echoes the movie’s stunningly effective line of dialogue the best. And why should this not be so? After all, as von Balthasar surely knew, what we do in life echoes in eternity:

“Pass on your way, then, with a smiling face, under the smile of him who bids you go.”

This was originally published in The Imaginative Conservative on March 8, 2016.