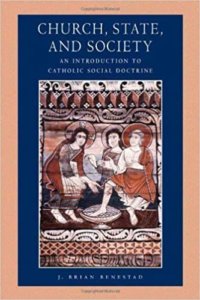 With this book, Professor Benestad makes a much needed contribution to the study of Catholic Social Doctrine. The book is elegantly written, theologically sound, and surprisingly comprehensive. It is clearly the work of a more-than-competent theologian and an extraordinarily thoughtful scholar. It is written primarily for an American audience. To some, this may detract from its merit by limiting the scope of a topic that, by its nature, applies to the Universal Church.

For others, this aspect of the book provides a very helpful context through which the giant subject of Catholic Social Doctrine (CSD) may be approached. And with its provocative analysis of the statements by the United States Conference of Catholic Bishops (USCCB) and references to figures such as Leon Kass, Mary Ann Glendon, Father Ernest Fortin, and Alexis de Tocqueville, the book is helpful to American Catholics.

The introduction and first four chapters constitute the theoretical core of the book, tackling the concepts of human dignity, natural law, and the common good. Impressively, Benestad brings these concepts into dialogue with prevailing doctrines in American society such as liberalism, positivism, individualism, and historicism. His familiarity with Augustine, Aquinas, and the writings of John Paul II and Benedict XVI helps the reader understand something absolutely crucial about CSD, namely, that it should be regarded as a part of moral theology as a whole.

Benestad’s argument for a fuller understanding of human dignity based on the fulfillment of human potential, rather than simply the protection of human rights, is inspiring. His discussion of the common good, moreover, is timely, insightful, and colorful (for example, the book includes a discussion of Jane Austen and Alessandro Manzoni novels, which brings the discussion to a whole new level of insight).

I will focus on the chapter entitled “Civil Society and the Church.” This chapter is the first of three that concern what Benestad regards as the most important subsidiary institutions (the Church, the family, and the university) and their relation to political society. The chapters begin with a very helpful passage from Avery Cardinal Dulles, which provides a helpful context for the entire chapter:

“To preach faith in Christ and to administer the sacraments are . . . proper to the Church. The Church was established precisely in order that these activities might be performed.”

“But to erect a just and prosperous society is not . . . the proper business of the Church. To contribute to such a society is, however, a responsibility of Christians insofar as they are citizens of the earthly community. Unless they live up to their civic obligations they will be guilty in the sight of God.”

“All Christians, whether clergy or laity, have duties as members of the human community, but to penetrate secular professions and organizations with the spirit of the gospel is preeminently the responsibility of the laity.”1

As Benestad argues, since the 1960’s USCCB has not heeded Cardinal Dulles’ advice and has eagerly engaged in partisan politics by taking positions on public policy. As he acknowledges, there are sometimes strong arguments for doing so. Not only do the bishops have the right to weigh in on political and legal matters, but doing so often overlaps with concerns that are more central to the Church’s mission.

In spite of this, however, Benestad cautions the Church against engaging in policy questions for several reasons. Not only do such matters fall outside the purview and competence of Church officials, but taking sides in such debates can confuse the faithful, who often lack the understanding of which episcopal pronouncements require their assent and which do not. They will tend to believe that everything the bishops say is binding or, still worse (and perhaps more likely), that nothing they say is binding.

As Benestad sees it, the Church should keep its attention upon its ever-present mission of preaching the gospel, which, in modern times, is more necessary and urgent than ever. As he puts it, “the bishops should avoid a partisan policy focus in their pastoral letters unless it is required by Catholic social doctrine or the presence of clear evils.”2

To sharpen his criticism of the bishops’ involvement in politics, Benestad carefully analyses the 2003 document entitled Faithful Citizenship: A Catholic Call to Political Responsibility in which the bishops outline their own political priorities: (1) protecting human life, (2) promoting family life, (3) pursuing social justice, and (4) practicing global solidarity.

According to Benestad the document is misleading because it implicitly promotes the “consistent life ethic” of the late Joseph Cardinal Bernadin. According to that view, Catholics should support raising the minimum wage, oppose nearly all modern wars, and favor the abolition of the death penalty with the same fervor that they oppose abortion and euthanasia.

By this standard, pro-life politicians who wage war and cut spending on entitlement programs like welfare are just as out of step with Catholic teaching as pro-choice politicians whose views represent the mirror image. Unfortunately therefore, Faithful Citizenship does not “present abortion as a calamity of the first order” and, as Benestad argues, “reflects more Cardinal Bernadin’s seamless garment theory than it does John Paul II’s Evangelium Vitae.3

This problem is made even worse by the document’s failure to address the problem of Catholic politicians on the subject of abortion and same sex marriage. As many have pointed out, the patron saint of such politicians has always been President John F. Kennedy, who vowed to check his Catholic faith at the door of the oval office, declaring that, while he holds certain moral and religious convictions, he wouldn’t dream of imposing those convictions upon the rest of society. As Benestad quips, this is like a pre-Civil War politician saying, “I am personally opposed to slavery, but [I] won’t support a law banning slavery.”

A few pages later, Benestad brings the most serious indictment against Faithful Citizenship. Not only does it confuse American Catholics as to what their political priorities should be, it furthermore seems to permit Catholics to “vote for a political program or individual law [such as abortion or same-sex marriage] which contradicts the fundamental content of morals.”4

Interpreting the Vatican’s Doctrinal Note, Benestad makes his position clear when he writes “Catholics may not vote for a candidate whose political program is to protect the right to choose abortion, or to support the legalization of same-sex marriage and euthanasia, even if he or she seems to have good positions on the issues falling under the rubric of social justice.”5 Having said this, it is not surprising that Benestad also criticizes the bishops for not having done enough to “unsettle pro-choice Catholics and Catholic politicians . . . [who] continue to be pro-choice and to maintain that they are in full communion with the Catholic Church because they are able to receive the Eucharist.”6

I must say that I admire Benestad for taking this very strong position, one that I ultimately share. I wonder, though, if he’s done enough in his book to answer what will surely be the responses of liberal Catholics throughout the United States. At first blush, at least, the argument advanced in chapter 6 of the book seems to be working at cross-purposes. On the one hand, the chapter begins with an endorsement of Cardinal Dulles’ argument that the Church should shy away from matters of public policy, such as whether to raise the minimum wage, whether to privatize social security, or whether a particular military intervention satisfies Catholic just war doctrine.

When Benestad turns to criticizing Faithful Citizenship, however, we learn that the bishops are not involved enough in public policy as regards opposing abortion and same-sex marriage. Clearly, for the bishops to use their position to “unsettle” pro-choice politicians is to involve themselves in politics very directly.

To be sure, Benestad would argue that whatever apparent tension may exist here is eliminated by a simple, but crucial, distinction. As he says, “the bishops should avoid a partisan policy focus in their pastoral letters unless it is required by Catholic social doctrine or the presence of clear evils.”7 Whereas Catholics and Catholic politicians may disagree in good conscience as to whether the Church’s social doctrine supports increasing the minimum wage or invading Iraq, there is no room for disagreement when it comes to abortion and similar intrinsic evils.

But is this true? If it is, I don’t believe Benestad has persuasively shown it to be true. In his own chapter on the life issues (chapter 5) the Church’s teaching on abortion is presented clearly and thoroughly. Laws that authorize or promote abortion, says John Paul II in Evangelium Vitae, are fundamentally unjust laws.8

The current law of the land, moreover, as declared by the U.S. Supreme Court in Roe v. Wade and Casey v. Planned Parenthood,9 does just that and effectively bars the states from prohibiting abortion on demand. It would  therefore seem that Catholic public officials who support these decisions are in blatant conflict with the Church’s teaching.

As flawless as this argument may seem, something about it doesn’t sit well. First of all, Roe and Casey aren’t statutory laws. They are judicial interpretations of the U.S. Constitution. If the way in which these decisions interpret the U.S. Bill of Rights is correct, it would mean the Bill of Rights itself is unjust. This may seem hair-splitting, but isn’t it precisely the confusion between the legislative function and the judicial function that led to Roe and Casey in the first place?

It is difficult not to be persuaded by Benestad’s argument in regards to those politicians who celebrate Roe and Casey precisely because they enshrine the right to abortion. There seems to be a more pragmatic approach, however, which regards these decisions, not as enshrining a fundamental or natural right, but as permitting a certain action that many people rightly regard as morally evil.

Granted, this is not the language used by Harry Blackmun and Sandra Day O’Connor, but what are we to say about a Catholic politician who regards abortion as morally evil, even murderous, but who is convinced that the best way to counteract it is by means other than by criminalizing abortion, who regard the sin of abortion much like Augustine regarded the sin of prostitution or Aquinas regarded the sin of usury?10

They may not believe, as Casey declares, that the right to abortion lies at “the heart of liberty,” but they support the practical effect of that decision by forcing society to deal with abortion by means other than criminalization. If Benestad, or any Church official, responds that Evangelium Vitae requires that abortion be criminalized, does that not come with the obligation to explain how it should be criminalized? And wouldn’t that mean an obligation to become involved in an area that Benestad, Cardinal Dulles, and even the bishops themselves, already admit they have no competence?

Peter Koritansky is an Associate Professor of History, Philosophy, and Religious Studies at the University of Prince Edward Island in Canada. He is author and editor of several books, with the latest being Human Nature, Contemplation, and the Political Order: Essays Inspired by Jacques Maritain's Scholasticism and Politics (Catholic University, 2014).

Faith, Philosophy, and Postmodernism in Voegelin

Interview with William Thompson-Uberuaga About His Book, “Your Kin-dom Come: The Lord’s Prayer in a Global Age”

The Temporality of Political Obligation

Michael D. O’Brien and the War between Good and Evil in an Incarnational Universe