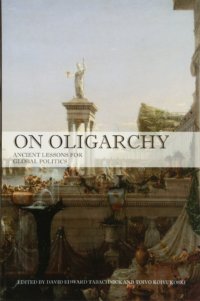 The theme of oligarchy is highly relevant to many vexing contemporary political debates. In the United States, the 2012 election campaign is being fought over “fairness” between the rich and the poor and allegations that the political power of the wealthy is being institutionalized by such developments as the Citizens United decision. In Canada, increasing socioeconomic upheavals are altering the flatter social landscape that many Canadians pointed to with pride as distinguishing Canada from its southern neighbor. The eurozone financial crisis has forced a reconsideration of the redistributive policies that had blunted the complaints of the European middle classes against the remnants of the old aristocracy in the post-war period.

Economic globalization has created a new, global jet-set whose wealthy members have more in common with each other than with their fellow citizens in their respective native lands. While debates about the relative standing of rich vis-à-vis the poor are especially contentious today, they are merely a continuation of the very old debate about how the rich and poor can live together.

The common supposition of this volume’s authors is that the ancients’ evaluation of oligarchy remains highly relevant. Aristotle’s rich treatment of oligarchy in his Politics is the key text for eight of the ten contributors to this volume (it’s unfortunate that Aristotle’s Constitution of Athens, mentioned in passing only twice, wasn’t given more attention). In addition to Aristotle, the contributors draw on the texts of Plato, Cicero, and Thucydides.

A Facile Misuse of Aristotle

Let us begin with those who think that Western “democracies” are in fact nothing other than oligarchies. Peter Simpson, professor of philosophy and classics at the City University of New York, enumerates eleven features in Aristotle’s account of oligarchy. Simpson asserts that these features are all present in the American regime and have been so since its founding. Consider just three features of oligarchy enumerated by Simpson:

Simpson sees these realized in the United States from the time of the American Revolution:

Now surely this is simply not serious. And to later on implicitly compare Presidents George W. Bush and Barack Obama to George III is not to enter into a serious conversation. If one really wants to think about the recent extension of executive power in the United States one may read Stephen Knott’s Rush to Judgment. Or if one wants to think about how Aristotle helps us to understand the executive power vested in the president and governors, one has only to read Harvey Mansfield’s Taming the Prince. But the sort of facile use of Aristotle’s text that Simpson offers here is a disappointment from one who has published a praiseworthy translation and commentary on the Politics.

An Imagined Threat to Free Speech

In addition to Simpson, Craig Cooper and Steven Skultety argue that Western countries have slipped or are slipping into oligarchy. Cooper, professor of classics at Nipissing University, argues that Aristotle identified “freedom of speech” with democracies and suppression of free speech with oligarchies; to do so, Cooper implausibly identifies Aristotle’s concern with access to assemblies with a modern notion of freedom of speech.

Cooper then writes that the proroguing of the Canadian parliament in 2009 was an attempt by prime minister Stephen Harper to suppress free speech (and, by implication, make Canada an oligarchy). Cooper writes that Harper was thwarted in part by the Facebook site Canadians Against Proroguing Parliament.

To claim that free speech was suppressed during this period and that Facebook helped to save the Canadian regime is surely an exaggerated analysis as facile as Simpson’s: although there are serious objections to be made to the proroguing of parliament, Canada was no Tahrir Square where Facebook and Twitter were the best and most open forums.

Skultety, assistant professor of philosophy at the University of Mississippi, offers the most balanced and useful essay of this group. Skultety analyses the mistake of oligarchs–and democrats–who have only a partial notion of justice and mistake this partial justice for the whole of justice. Skultety argues that the wealthy do rule in today’s United States, but he worries that there are no more worthy rulers. Many people, he argues, limit their notion of the good to only one thing, whether that is wealth, security, health, or education, and thus engage in an unlimited pursuit of this one good.

The next group of contributors to On Oligarchy are sanguine about the prospects for Western regimes. Waller Newell, professor of political science and philosophy at Carleton University, relies on an exegesis of both Aristotle’s account of oikonomia in Politics I, Aristotle’s critique of the regimes proposed by Plato, Phaeleas, and Hippodamus in Politics II, as well as Aristotle’s discussion of the mixed regime of polity in Politics III and IV to diagnose the relative political health of Western countries and dangerous political conditions elsewhere. Newell finds that the relatively large middle classes in the West share the moderation that stabilizes Aristotle’s polity, while immoderation of oligarchic elites in countries like Russia and China require severe, authoritarian regimes to sustain.

The fine essay by Laurie Johnson Bagby, professor of political science at Kansas State University, on Thucydides’ political philosophy makes little reference to contemporary politics but makes a similar point to Newell’s about the moderating effects of bringing together the rich and the poor. Bagby argues that Thucydides diagnoses ambition and greed as the source of instability of both oligarchic and democratic regimes and so that Thucydides favoured a regime mixed of the high and the low parts of the city.

Has America Solved the Problem of Oligarchy?

Jeffrey Sikkenga, associate professor of political science at Ashland University, goes so far as to suggest that the American republic may have solved the problem of oligarchy. On Sikkenga’s reading, Plato and Aristotle thought that unchecked acquisitiveness can be addressed by educating the young to be ambitious for honour even more than for wealth.

For Publius of the Federalist Papers, this solution is unavailable because Publius believes that acquisitiveness is more basic to human nature than ambition. Rather than making a solution to the abuse of political power for the sake of wealth impossible, however, the basic quality of acquisitiveness makes possible a modern, republican solution: the creation of a realm of economic activity where wealth can be built up separate from political office.

Most men will be content to channel their energies into acquiring wealth rather than seeking office, so American politics will be relatively free from temptations to abuse office for the sake of wealth–a conclusion diametrically opposite to that of Simpson. It would be interesting to know if Sikkenga would claim that his optimistic analysis would apply with equal validity in this age of crony capitalism as it did at the American Founding.

Not Free of Oligarchic Dangers

Finally, several of the contributors to the volume think that, although Western regimes are not oligarchies, the dangers associated with oligarchy are present today. Toivo Koivukoski, associate professor of political science at Nipissing University, diagnoses the emergence of oligarchy as following from an erosion of the distinction between the public realm, where we should have access to a lofty notion of the public good, and the private realm, where we provide for our base, biological nature in part through the accumulation of wealth.

Koivukoski argues that oligarchy confuses success in the acquisition of wealth in the private realm with qualification to rule in the public realm, with the consequence that wealth acquires a mystique that substitutes for a robust notion of the public good. He offers the examples of Ross Perot, Nicaraguan industrialists and landowners in the 1980s, and contemporary Saudi rulers as recent examples of oligarchs aspiring to rule.

The Importance of Balancing Institutions

Jeremy Neill, assistant professor of philosophy at Houston Baptist University, argues that Aristotle’s polity is much like the regime established by America’s Founding Fathers in that both Aristotle and the Founders placed an emphasis on institutional arrangements to balance the competing interests of different classes. Neill is the contributor most sympathetic to oligarchy.

He thinks that oligarchic interests often prevail in America, but he argues that this is not necessarily problematic because the economic elite represent established interests. Neill argues that American-based companies abroad, unrestrained by American democratic mores, act like oligarchs and undermine the welfare of developing countries. For Neill, the real danger of American oligarchs is posed abroad rather than at home.

Youth Must Choose More Than Prosperity

Geoffrey Kellow, assistant professor of humanities at Carleton University, argues that modern liberal democracies face the same problem worried Cicero at the end of the Roman republic: young people no longer have a model of greatness, instead mistaking the prestige that wealth confers for virtue. The very success of Rome and of modern liberal democracies in creating prosperity undermines the regime’s foundations if young people think that prosperity is the end of the regime rather than simply a good that attends upon a successful regime.

To counter these trends among the youth, Cicero described an education in De Officiis that would present men worthy of emulation for their virtue; Kellow implies an education that prepares youth to emulate worthy ancestors is necessary in modern times. Given the fate of the Roman Republic and of Cicero himself, Kellow’s comparison of Rome and modern liberal democracies suggests that we should be concerned about the fate of contemporary political communities.

Bradshaw argues that Locke claimed to solve the problem of the pursuit of wealth by making it the foundation of the regime rather than a threat to the regime; on Bradshaw’s account, which echoes C.B. Macpherson’s, Locke would have us frankly admit that humans are acquisitive creatures and that it is best to accommodate rather than to fight this fact by designing a regime that relies on institutional checks (rather than rather than virtue and moderation) to prevent abuses of power. Bradshaw, like Macpherson, is skeptical that Locke has solved the problem of oligarchy, and she argues that Locke’s regime remains vulnerable to the problems Plato and Aristotle find in all oligarchies, particularly those oligarchies that lack a robust middle class.

On Oligarchy brings together essays of uneven but mostly high quality on an important, timely theme. These essays will be a valuable resource to scholars and students looking for suggestions about how to connect philosophy to contemporary concerns as well as to scholars studying these ancient philosophers. Pairing the study of the ancients’ critique of oligarchy with the study of Tocqueville’s critique of democracy may help to guide us through the political debates in the wake of the 2007 financial crisis–and particularly questions about the proper role of wealth in our society provoked by that crisis.

Jacqueline Pfeffer Merrill is Vice President of Development at the American Council of Trustees and Alumni. She has published articles about political philosophy, social issues, and bioethics.