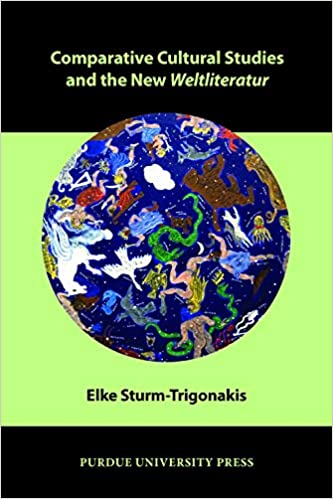 Elke Sturm-Trigonakis’ Comparative Cultural Studies and the New Weltliteratur, a revised and updated American version of the original 2007 publication in German, opens a new perspective on much debated world literature by revisiting the theoretical framework of comparative cultural studies and by expanding on Goethe’s concept of Weltliteratur (1827). Sturm-Trigonakis proposes a fresh frame of reference to analyze literary production in the age of globalization, namely New World Literature (NWL) to do justice to “intercultural or ethnic minorities literatures” which were framed (and mis-framed) by the literary discourse of each national literature.

The author opts for the fraught, most disputed term in postcolonial theory, hybridity, to bring together diverse writers who write in German, French, Spanish, Portuguese or English and were marginalized by national monolingual literatures. Two main criteria open access to what Sturm-Trigonakis terms as hybrid texts – multilingualism and theme, namely the literary processing of the discourse of globalization in literary contexts.

Her illuminating analysis of Goethe’s concept of Weltliteratur, built on previous contributions, shows its contemporary relevance as the author demonstrates that it can be understood as “a result of the new technical and communication options and (…) as developing them further and advancing them through the international information exchange” (15). Furthermore, she highlights Goethe’s “hermeneutics of alterity” which favors the understanding of what is foreign in the Other. Nevertheless, the author having paid her dues to Goethe, also marks her distance from him through her new cognitive grid of the previously neglected minority literatures whose aesthetics were totally ignored by German philologists till the 1990s.

Thus it is in the post-1990s international scholarship that Sturm-Trigonakis finds the necessary critical tools to inquire into the “hybrid” texts offering a critical overview of major scholars, thinkers or philologists such as Jacques Derrida, Homi Bhabha, or Tötösy de Zepetnek, that transformed the landscape of research. Moreover, in her determination to find a different design for literary studies than national philology, the author also turns to systems theory whose vision could provide for the reader not only a clearly separate category for hybrid literatures thus placing them on equal footing with national literature but also an a priori sensitization to difference.

Having established its theoretical premises, the author consolidates NYW as a separate subsystem of the superordinate literary system, “literatures of he world,” by elaborating on three interacting criteria, namely bilinguism and/or multilinguism ie tendency to language mixtures, globalization-related themes such as border-crossing or movement, and the new poles created by globality and transnationality, i.e. the regional and the local. However, as among these three parameters, the decisive one is “multilingualism within the text” (76), to flesh out her description of literary multilingualism the author inquires into its morphological aspect and into the old phenomena of metamultilingualism and transtextuality through examples from a wide range of authors writing in English, French, German or Spanish. To anticipate the readers’ objections as to the newness of such phenomena she also explains what distinguishes contemporary multilingualism from the previous one. Her prediction that multilingualism is going to be an even more widespread phenomenon in the future is certainly not far-fetched.

Not of much lesser importance is NWL thematization. A wider array of scholarship frames the author’s examination of NWL themes. Fernando de Toro’s concept of “nomadicities” is of particular relevance to Sturm-Trigonakis’ claim that in NWL texts “a broad spectrum of fictional representations of worldwide nomadism can be perceived” (132) accompanied by a multiple identity formation inscribed in space whether real or imaginary. Urlich Beck’s notion of “polygamy of space” (136) underpins the author’s analysis of this categorization, capital in understanding the NWL texts which are characterized by “de-hierarchized, transnational and atopic patterns” (148). Likewise, Markus Schroer’s work on the emphasis of space as a cognitive schema of classification regarding globalization phenomena helps the author consolidate her view of space in NWL texts in which “the liquefaction of spatial stability in the transnational” (157) can be observed.

Sturm-Trigonakis’ conclusive endorsement of Manuel Castells’ view of a new networked, ever-expanding society in which “‘the power of flows takes precedence over the flows of power’” (158) has a comforting note. Likewise, Carlos Fuentes’ transcultural vision of literature in his collection of essays, This I Believe positively underpins the author’s conclusion and underlines its transcultural direction. Therefore, since “NWL is aimed at global conditions and is less committed to ideological principles than many theorists of postcolonialism practice” (163), the reader may wonder whether the term hybrid literature does not finally appear rather cumbersome, even misleading in this study.

In any case, the author’s erudition, linguistic breadth and interdisciplinary methodology make Comparative Cultural Studies and the New Weltliteratur a valuable study in cultural and literary studies.