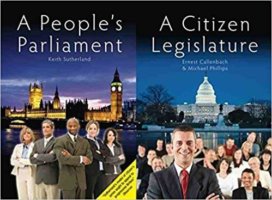 During the process of engendering a constitutional republic, the American founders knew of the dangers inherent in an unchecked democracy. They were keenly aware that a predominately democratic regime would eventually threaten the cornerstone of the republic, private property rights, and never permit Thomas Jefferson’s “natural aristocracy” to rise to the leadership of the state.

The founders hoped to solve this dilemma by installing mechanisms adapted from Montesquieu’s model whereby the central government (Leviathan) would be divided into three estates: the executive, legislative, and the judicial, by introducing the concept of “states rights” via the ninth and tenth amendments of the Bill of Rights, limiting the power of the executive, and by constitutionally requiring that election to the upper house (Senate) by the state legislature.

Today thanks to the pressures brought about by party politics, demagoguery, the “disproportionate influence of big money and the media,” and the inevitable rise of the libido dominandi, the American government has completed its journey from a constitutional republic to a social democracy. As a recent cover of Chronicles magazine proclaimed, We Are All Socialists Now!

The question is, is there anything we can do to thwart what appears to be the inexorable march toward American statism?

A new book (actually two) by the British publishing house, Imprint Academic, proffers ideas that are innovative and practical while bearing a “classical pedigree.” The American version, A Citizen Legislature, by Ernest Callenbach and Michael Phillips, initially published in 1985, seeks to incorporate John Adams’s ideal of the House of Representatives, that it “should be an exact portrait, in miniature, of the people at large, as it should think, feel, reason, and act like them.”

Aware that the current (and past) House of Representatives is overloaded with white lawyers and deficient in electricians, women, bricklayers, African-Americans, philosophers, Latinos, and nurses, the authors propose to rectify the situation by applying the ancient Greek remedy of sortition, the use of random selection. Noting that the present system of electing representatives results in the purchase of congressmen, much like business is conducted in a Wheeling bordello, the authors quite accurately claim that the average American citizen rarely benefits from congressional skullduggery. One need look no further than the current financial crisis!

New representatives would serve three years with their terms overlapping and functioning the same as the current House without having to answer to political bosses, lobbyists, contributors, or the power elite in either the Senate, the bureaucracy, or the administration; these representatives owe them nothing and they’re gone in three years. The authors point out that the “drafting of laws would continue to be done by executive employees, legislative analysts, business lobbyists, and citizen organizations, working with Congressional staff members.” And, this is a critical point.

Most of these representatives will be “average” people, a significant number without college degrees or experience with apparatchiks, bureaucrats, and the power elite. Many will be appalled at witnessing the waste in government first hand and presumably a portion of those who lean to the “left” will join with the more conservative members to actually begin the process of downsizing Leviathan. Will a bricklayer from East Liverpool, Ohio, whose pal back home was injured on the job and refused Social Security benefits, be happy with idea of the University of Pittsburgh procuring a $12 million dollar federal grant to study the mating habits of carp in the Monongahela River? I think not, and neither will he be likely to raise his taxes to pay for every liberal scheme introduced in the house!

Nor are these folks going to be delighted with the typically obfuscatory wording of federal legislation. They might even require that all proposed legislation be read by the full house and be presented in a simple and clear manner. Also, Representative House may be more inclined to resist the neoconservative/liberal Messianic desire to save the world and be less enthusiastic about the prospect of engaging in foreign entanglements, for much the same reasons as the Founders. They might even reclaim the constitutional prerogative to declare war!

The authors’ political preference is a little to the left. For example they heap praise on the Legal Assistance Programs, describing them as “one of the great successes of recent legislative history,” and suggest that The Peoples Republic of Oregon might serve as a good state to try out the sortition proposal because it is “one of the most socially innovative of the states . . . .”

One fear regarding “random selection” of representatives in the lower house is that we might end up with a coterie of drunks, coke heads, layabouts, and other ner-do-wells. But, considering the make up of the current House of Representatives, that might be a significant improvement! And, while the latter crop of congressional representatives will continue to feast at the public trough like leeches on Bogie’s back (see the African Queen) for a long, long time, the former assembly of representatives will be gone in three years, and much less likely to get their hand in the till.

Also, it should be noted that this proposal (sortition for the lower house) does not originate in the fecund albeit perverse minds of either Marx or Hegel but rather comes to us from the classical Greeks. The idea being that one applies sortition in selecting the lower house (true democracy), and the vote when selecting the upper house (aristocracy).

A Citizen Legislature is a practical plan to address a particularly egregious problem, the corruption of the U.S. House of Representatives. And, while there are a number of issues, questions, and problems with the authors’ thesis this book puts forth substantive proposals that deserve our attention and public debate.

The second book in this two-for-one deal is A People’s Parliament by Keith Sutherland, the publisher of the distinguished British publishing house, Imprint Academic. The People’s Parliament is an update of his book, The Party’s Over: Blueprint for a Very English Revolution (2004). Frankly, I preferred Sutherland’s book, which focuses on the British conceptualization of the separation of constitutional powers, because it is much richer in historical, philosophical, and political analysis, penetrates deeper with regard to specifics, and is imbued with that singular British humor exemplified by the authors’ reference to his writing style as a seventeenth century “rant with footnotes.”

The author’s thesis is that the “Victorian ballot box and the archaic political party” no longer function and a “constitutional revolution” is required to address the problems. Citing Immanuel Kant (“Democracy, in the truest sense of the word, is necessarily a despotism”) and reminding the reader of the “liberal objections” of English intellectuals from Burke to Mill to the “tyranny of the majority,” Sutherland concurs with the argument that the myth of democracy has acted to legitimize statism via the electoral process. As the franchise is expanded the “casual” reality of the individual voter’s “power” becomes irrelevant, which goes a long way to explaining voter apathy. However, he argues that it is not democracy that is the culprit here, rather the archaic mechanism that empowers the political parties and promotes factionalism. Sutherland seeks to “revitalize” British democracy.

One quibble of note is Sutherland’s claim (pg. 41) that “According to the U.S. Constitution the main focus of activity of the president, and the areas where his powers are relatively unchecked, is in the declaration and prosecution of war . . . .” Well, not exactly. In Article 1, Section 8 of the Constitution, we find that the “Congress shall have Power to . . . declare war . . . .” Not that any president since Harry Truman has had any problem usurping that particular power.

The author’s erudition and exegetical talents are best illustrated in his statement of purpose: “The institutions that are associated with liberal democracy — the secret ballot and the disciplined political party — are comparatively recent innovations and may have already outlive their usefulness.” This book suggests some more democratic alternatives and offer the enticing prospect of a truly liberal republic, combining the best of both traditions — the liberal emphasis on individual freedom and separation of institutional powers, and the republican emphasis on discursive debate in the pursuit of the common good, free of partisan influences.

Sutherland’s political and governmental proposals are not radical. He simply seeks to interpret the British Constitution more formally in describing the separation of powers in terms of his four estates: the Crown, the House of Lords (the upper House), the House of Commons (the lower House) and the Media.

The Crown, not the majority party, will provide a “short list” of three prospective appointees (chosen for their expertise in the various disciplines) for ministerial positions with the final selection executed by vote of the parliament or parliamentary committee. The House of Lords whose members will also be selected by parliament based on their expertise, will act to examine legislative proposals and draw up arguments both pro and con and present their arguments before the Commons. In essence they become the “Lords Advocate.” The House of Commons, chosen by sortition with the usual requirements for service, will act as a jury, listen to the arguments presented by the upper house, then after due consideration, vote yea, nay, or to send the legislation back to the House of Lords.

Perhaps, Sutherland’s most radical proposal is his “recognition of existing power relationships” including the dubious relationship of prime ministers and media moguls. Consequently, Sutherland argues, “such recognition of media influence is long overdue.” The author goes a bit wobbly in suggesting that if the media “were to form the necessary professional associations then it would be in their interest to police any skullduggery by (for example) suspending a newspaper guilty of infringing their professional standards from membership . . . .” Well, we can hope.

Sutherland further stipulates that because of sortition the House of Commons no longer would concern itself with citizen’s complaints with that function taken up by local newspapers. The author tells us “All this essay seeks to do is to reestablish the separation (of powers) in a manner that reflects the reality of British society in the twenty-first century.” His proposal is unequivocal and straightforward. It points to the ancient, honorable and republican traditions of the classical Greeks, the foundation of Western society, and deserves public debate and consideration.

The two essays discussed in this review reveal the effects of a fracture between the order of the world and spiritual order, detailed by Eric Voegelin in his essay, “Configurations of History” (Univ. of Missouri Press, Vol. 12, Published Essays, 1966-85, 1990). “The church was,” Voegelin writes, “one might say, the cement that reintroduced rationality through this necessary balance between secular and spiritual order.” The church is no longer able to reintroduce rationality into society and it will be the individual, Voegelin argues, who through “insights” gain the “true order, the order of true existence and of God, which can only be understood through the orders actually existent in history.” Perhaps, we bear witness to such insights in A People’s Parliament and A Citizen Legislature.

The Cosmology that Modernity Teaches Us

God: An Autobiography as Told to a Philosopher

Fate and Freedom in the Novels of David Adams Richards