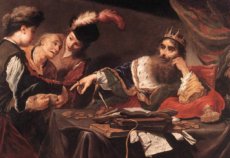 Foundational claims of equality –that “all men are created equal” –are difficult to evaluate. For example, natural right theorist claim that people are endowed with equal rights and the capacity to understand their rights; utilitarians argue that all humans share a similar capacity for experiencing pleasure and pain; Kantians contend that people share a common dignity by virtue of being moral agents. To say that people are equal by virtue of their rationality, passions, or dignity already entails a normative evaluation that a shared human characteristic is more significant than other apparent differences. How one determines which shared characteristic should be valued more than others, and whether such an evaluation can be derived from the empirical facts of the human condition, still bedevils theorist today. But what can be concluded is that any defense of foundational equality inevitably includes assumptions with political significance. Several of these historical and philosophical accounts are described below.

In his Politics (1282b 17-21), Aristotle (384-322 BC) argued that Justice is a form of quality where certain human virtues merit certain goods. For example, talented musicians and not well-born people deserve musical instruments. Equality for Aristotle, therefore, is the distribution of certain goods to certain people who are equal in merit (Pol. 1280a 10-25; see also Ethics 1131a 14-24).  Contemporary egalitarians extend the logic of relevant reasons beyond merit to considerations of need. For instance, Bernard Williams (1996) and Michael Walzer (1983) have maintained that medical care should be distributed by need rather than merit, for it would unjust for equally sick people to receive unequal medical treatment. However, Plato (c. 427/8-347/8 BC) in his Republic (406c-7a) would distribute medical care according to merit instead of need if such denial would not enable that to continue to serving his social function. Like Aristotle, Plato believed people of the deserved the same types of good, while people of a different merit deserved different types of goods. The relationship between foundational and distributional claims of egalitarianism therefore depends o some extant on the debate about relevant reason being based on merit or need.

A second theoretical framework by which to understand egalitarianism is equality of opportunity and its relationship to freedom. Equal opportunity is sometimes identified as inegalitarian because it affects who gets social goods rather than how those goods are distributed. But if inequalities are produced by one’s environment rather than by nature, then equality of opportunity implies an equalization of the conditions within which one operates that could include a radical distribution of social goods. Taken to its extreme, this distribution of social goods would prevent people from exercising their freedom (i.e., using their resources, talents, and virtues) if that exercise tends to lead to unequal results. Liberals see as permitting people to pursue their own life plans, even if they with radical equalization of opportunity. Libertarians like Robert Nozick (1974) go further than liberals in identifying freedoms with the near absolute right to own property and to make contracts regardless of the distribution of social goods that result from such a right. This position runs contrary to welfare-state liberals like John Rawls ([1971] 2005), who argue that the aim of social justice is to maximize the worth of freedom to the least advantaged member of society, even if this requires a redistribution of income and wealth from rich to poor.

Some critics of welfare-state liberalism focus on the lack of opportunity among citizens to participate in governance at political equals. These democratic theorists, such as Hannah Arendt ([1958] 2005), Carole Pateman (1989), and Jane Mansbridge (1980), look back to the works of Jean-Jacques Rousseau (1712-1778), John Stuart Mill (1806-1873), and Aristotle as a way to urge that societies be sufficiently small that citizens will be likely to care as much about their fellow citizens as about their own families. The call for a decentralization of political and economic institutions might not only provide citizens the opportunities to participate directly in governing the society but might also prevent majorities from depriving minorities of their fair share of social goods. This position is similar to the socialist critique of capitalism, according to which private ownership of property permits a few people to exercise power over many other people’s lives. However, socialists are divided between those who advocate revolutionary violence and those who seek democratic power in order to decentralize the state.

Two more-recent forms of egalitarianism have emerged with respect to gender and race. Plato introduced the idea of gender egalitarianism in suggesting that certain men and certain women are equally endowed with the virtues necessary for ruling, and Mill called for all women to be treated as the social, economic, and political equals of men. Contemporary feminist are divided on whether gender equality in public life should be their objective or whether to establish the supremacy of women and their values over men.

The contemporary debate about racial egalitarianism is similar on that there is a division about the benefits of positive discrimination, such as affirmative action. Egalitarian thinkers about race are in agreement about the need to prohibit discrimination against minorities in the basis of their race, but they disagree about the use of positive discrimination. Defenders of the practice justify the policy that individual minorities are being compensated as members of a disadvantaged group that has suffered past discriminations; opponents point out that such a policy conflicts with treating individuals those groups as equal with other citizens.

Finally, Christianity has contributed to the conception of egalitarianism. The biblical idea of equality, for instance, holds that all human persons are created by God as equal in this fundamental worth and moral status. Individuals have equal responsibility to use their gifts and obey their calling from God. One of the current controversies about Christian egalitarianism has centered on the role of women, as some proponents have contended that women and men should share identical authority and responsibility in marriage, religion, and elsewhere. The Catholic Church has formally opposed this position, referring to it as radical egalitarianism, on the grounds that there are profound differences between men and women but that these difference complementary rather than necessarily competitive in nature, a position known as complementarianism. In Pope John Paul II’s 1988 apostolic letter Mulieris Dignitatem (secs. 17-18,21) and in “On the Collaboration of Men and Women” (sec. 10), issued by the Congregation for the Doctrine of the Faith in 2004, the Church reiterated its belief of complementarianism but urged governments to combat all unjust sexual discrimination, calling for woman to have access to positions of responsibility in politics and economics while, at the same time, defending celibacy, virginity, and an all-male priesthood.

Aristotle. The Politics and the Constitution of Athens. Editied by Stephen Everson. Cambridge: Cambridge University Press, 1996.

Congregation for the Doctrine of the Faith. “letter to the Bishops of the Catholic Church on the Collaboration of Men and Women in the Church and the World.” May 31, 2004. http://www.vatican.va/roman_curia/congregations/cfaith/documents/rc_con_cfaith_doc_20040731_collaboration_en.html.

John Paul II.  Mulieris dignitatem [Apostolic Letter on the Dignity and Vocation of Women on the Occasion of the Marian Year].  August 15, 1988.  http://vatican.va/holy_father/john_paul_ii/apost_letters/documents/hf_jp_ii_apl_15081988_mulieris-dignitatem_en.html.

On the Depths of Villainy

Is the Media the Enemy of the People?