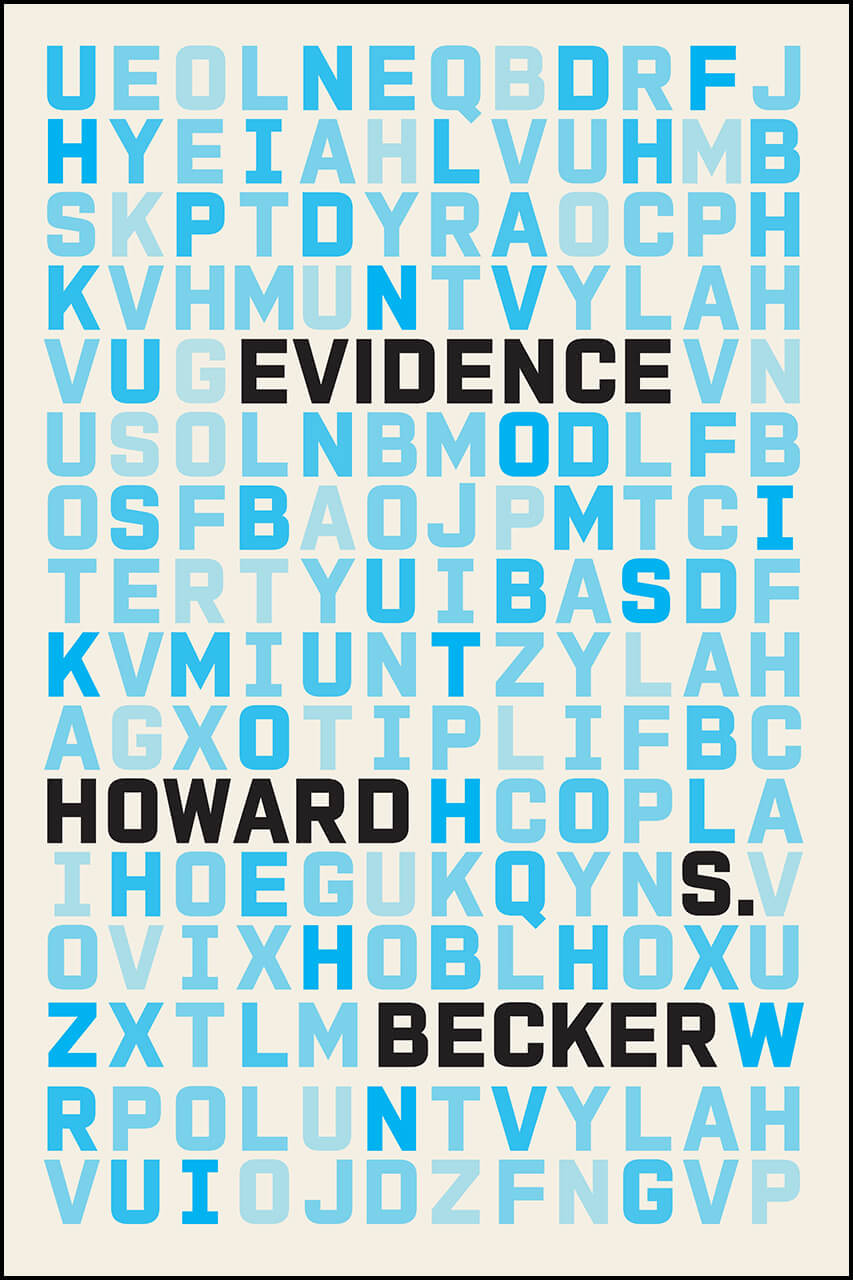 Social scientists combine data, evidence, and ideas to convince themselves and others that a certain phenomenon is true and not a result of accident or coincidence. A social scientist mark what they have observe in writing, visual images, or audio recording which serves as data and then later is transformed into evidence when scientist use them to support an argument. The argument in turn becomes an idea (or concept or theory) when it becomes generalizable to other people and situations. In Evidence, Becker examines how data is collected and transformed into evidence and makes recommendations of how to provide good evidence in social science research.

Becker starts with modes of knowledge and cites eighteenth-century social scientists Carl Linnaeus and George-Louis Leclerc, Comte de Buffon as the two main approaches. Linneaus proposed the use of a fully made classificatory scheme into which scientists could insert the information their research produced; Buffon proposed to make the construction of the classificatory scheme itself the main task to be done, a task that would never end because new and unexpected data would continually emerge and overflow existing classificatory categories. Linneaus’ approach gave rise to research practices of amassing large bodies of data through surveys or from organizations, e.g., U.S. Census Bureau, and by using statistical techniques to focus on key variables and generalize their findings through probabilistic reasoning to large populations. Buffon’s approach gave rise to the long-term field work where the scientist can act as a participant and conduct lengthy unscripted interviews which can solve some problems but raise new ones in the process.

If Linneaus’ approach can be described as quantitative, then Buffon’s can be categorized as qualitative. According to Becker, the quantitative model has most often trouble with the connection between data and evidence: is the data really measuring what the investigator claims they are measuring and can that data later be used as evidence. The qualitative model has trouble with showing that the collected evidence is related to the idea the investigator insists it demonstrates. Since the post-World War II period, sociologists have engaged in a repetitive dialogue about the qualitative-quantitative problem, usually started by quantitative scientists who want to establish a division of labor with qualitative scientists defining terms and suggesting hypothesis and quantitative scientists doing the “real work” of testing and proving the hypothesis.

Becker recognizes the validity of both approaches and turns his attention to a series of case studies of how data is actually collected in sociology and what errors to avoid so it does not become bad evidence or bad ideas. His first example is the U.S. Census and the difficulty of counting the homeless because the Census required counting people as living somewhere. Other problem with the Census included how to count race (Can you belong to more than one? How many categories are offered?), religion (forbidden by law), and marital status (cohabitation and same-sex marriage). What these problems reveal is that scientists have to be careful about the data they are using for evidence because the data itself may not incorporate features of society that exist. That is, there may be aspects of society that exist outside the sociologist’s own thinking.

The next example is data gathered by government employees who document their work, such as a medical examiner’s report of causes of death, prosecutors’ cases against white collar crime, police arrests of drug dealers, and schools’ classification of children’s cognitive abilities. Sociologists have learned that how these cases categorized depend upon the patterns of influence – the worker’s routine and interaction with the law, police, family members, etc. – as much as the cases themselves. The statistics these workers produce can serve as evidence for something but what they are evidence for has to be demonstrated rather than assumed.

The third example are hired hands nonscientist data gathers, including those who report data about themselves. The lesson here is you get what you pay for: scientific accuracy simply costs more. Becker then turns to chief investigators and their helpers in fieldwork studies with recommendation that people act on the basis of a shared understanding and adopt transparency if a research project is to be successful. If everyone who reads the report knows that the data is reliable, then it can be accepted as evidence.

Becker also points out inaccuracies in qualitive work where ideas are taken for granted rather than questioning them; failure to acknowledge ongoing changes in the communities they are studying; neglecting the history of the community; and not letting the discovery of new ideas lead the research in a different direction. But perhaps the biggest mistake field workers make is the generalization of their ideas based on a particular place with a specific people. However, the key is to not to make a mistake but to correct it once it is discovered. For Becker, avoid making the same mistake twice and learn how to turn technical problems into researchable questions, e.g., how to count people on the basis of race.

Evidence is thoughtful account on how to do social science research and should be read by those who engage in such work. Becker shows the importance of thinking about the practical aspects of methodology in collecting data and transforming it into evidence. In a world of fake news and anti-vaccination rhetoric, there is no timelier book than Evidence to show us how to think through these and other issues.