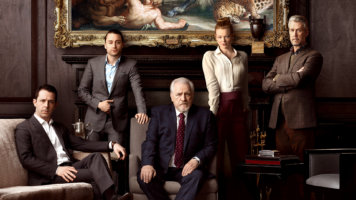 “The father saw from afar the limits at which his authority had to expire; and when time has brought him to those limits, he abdicates without difficulty.”

Tocqueville expresses surprise that commentators do not dwell more on the influence of inheritance.  He believes that the laws and mores of inheritance “should be placed at the head of all political institutions,” for inheritance “divides, shares, disseminates property and power . . . it crushes or sends flying into pieces all that gets in its way” (DA, 79-80).  HBO’s 2018 Succession is a drama about inheritance flaying a family.

A psychoanalyst is as keenly interested in inheritance as any French aristocrat.  For French psychoanalyst Jacques Lacan, all self-understanding is retrospective.  Not only does our sense of self date to the early months of life, the unconscious – the arbiter of understanding – is like a language: its rhetoric, names, meanings, metaphors, and symbols, come to us from the past, from establishment.  The term for establishment in Lacan is the Other and looming large in the Other are property and family.

Tocqueville agrees with Lacan: there is no self-understanding independent of family and property.  However, unlike Lacan, Tocqueville thinks that political management of inheritance can modify the mores of family and make domestic manners milder.  Where law makes persons equal, symmetry becomes a platform for sympathy: “I think that as mores and laws are more democratic, the relationships of father and son become more intimate and milder; rule and authority are encountered less often” (DA, 1037).  By contrast, Lacan thinks asymmetries within family invariant and the power of inheritance more resistant to sympathy than Tocqueville might guess.  Long before Lacan, Jane Austen observed the bleak consequences of inheritance on domestic bliss and his contemporary Agatha Christie dramatizes its murderous aspects.  HBO’s writers favor Lacan: Succession begins with an Oedipus challenge from the second son and the season concludes with his failure and utter castration.

An aging Scotsman has ruled his family and property with the iron rod of his personality – “a harsh parent intimidates by his mere presence.”[2]  An emigrant to America, Logan Roy – played by the fantastic Scottish actor, Brian Cox – has built a media empire from New York.  A multi-billionaire, and thoroughly steeped in the dynamics of power, he is the sort of man who keeps the president of the United States waiting on the phone.  His four children suffer chronic self-doubt and none are mature, functioning adults.  Estranged from their belittling English mother, when their father suffers a stroke, the children ponder their inheritance and the second son (Kendall Roy played by Jeremy Strong) plots his ascension to the throne.  Kendall’s siblings undercut his every move, their ailing father implacable and masterfully playing one off the other. An episode called “Austerlitz” cleverly references Napoleon’s brilliant diplomatic and military maneuvers as he solidified power by cutting and splicing his allies and enemies alike.  Napoleon railed against his demise and Logan Roy refuses to hear Tocqueville’s message about abdication.

The stylish series comes from the pen of an English writer, Jesse Armstrong, and, as some readers may already have guessed, the empire and family is loosely based on Fox and Rupert Murdoch.  Boardroom drama, 0.01% lifestyle, political shenanigans, and a manic family wedding are settings for the damaging domestic dynamics to work themselves out.  Succession is a challenge to Tocqueville’s claim that in democracy, “the father is, in the eyes of the law, only a citizen older and richer than his sons” (DA, 1035).  “Democracy loosens social bonds, but it tightens natural bonds.  It brings family members closer together at the same time that it separates citizens” (DA, 1040).

Not in Succession.  For Lacan, the father is never merely just older and rich, he is always a lawgiver.  Human desire is “bound up since the dawn of history with the imago of the father” (E, 95).  The reason is that the father is the root of sympathy and moral order.  The father, argues Lacan, is the vehicle by which the narcissistic child “transcends himself in a normative sublimation” (E, 97).

Why are “cherubic” infants narcissists needing to submit to norms?  Children first take shape psychologically in what Lacan famously termed the mirror stage.  A child’s fascination in front of a mirror is the self’s “original dereliction” (E, 99).  Apes and chimpanzees do not experience this fascination.  For the infant, it is both a jubilant and bleak experience.  Gesturing, the child mimics the image in the mirror, falls in love with it, in fact, but also picks up on something eerie: the image is more pulled together and glamorous than the child.  The infant experiences interiorly the motor difficulties of a still maturing and incompetent body.  This experience of love (narcissism) is accompanied by jealousy (aggression).  Pace Tocqueville, fathers can never be mild because children are not mild.  Every child casts “out onto the world the disorder that constitutes his being” (E, 93).

“Oedipal identification” transfers narcissistic self-aggression onto the father, who, in turn, castrates, and dampens the anger at source.  This dampening generates sympathy, which, in Lacan, is built on the respect demanded by the father.  The law’s forceful insistence on respect for property is a nod to the psychological authority of the father.  In Succession, inheritance is the embodiment of the father: it is the permanent mechanism of castration deployed by Logan Roy.  Of course, the “original dereliction” is not overcome fully and thus respect and sympathy sit atop the untrustworthy sands of jealously and resentment (E, 95-96). It is for this reason that modernity’s favoured child, humanitarianism, “tends to misrecognize the constancy of aggressive tension in all moral life” (E, 97).  A failing of modernity brilliantly exposed by Nietzsche.

Tocqueville might counter that Succession is actually a sign of the reemergence in America of aristocracy.  Joel Kotkin is the best commentator on domestic trends in the US and he sees a definite movement to aristocracy.  If Succession is tracking this rebirth, then Tocqueville ably captures the domesticity it depicts: “So the various members of the aristocratic family are very tightly bound together; their interests go together, their minds are in agreement; but it is rare that their hearts understand each other” (DA, 1039).  Tocqueville observes wealth to circulate “with incredible rapidity” (DA, 85) in America but this is less and less the case.

Tocqueville astutely observes that commercial societies are more heavily regulated and managed by government.  Old aristocracy, tied to the land and able to defend it, meant that over the centuries powerful laws and mores set ramparts around its wealth and authority (DA, 1231).  Commercial wealth has no such protection.  Alienated from the military it cannot deliver its own protection and its mobility makes it fragile.  For these reasons, contemporary wealth needs the state as guarantor and the quid pro quo is state expansion (Kotkin sees precisely this happening. Interestingly, Tocqueville points out that even in the Middle Ages kings micromanaged commercial life whilst leaving the landed gentry mostly alone (DM, 1233).

The wrinkle Succession suggests is that a media empire is akin to land, for politics is digested through media.  Logan Roy does not hesitate to show the president who is boss so perhaps the final disturbing message of Succession is that you and I are castrated by the property accretions of media and social media tycoons.

Graham James McAleerm is a Professor at Loyola University Maryland, with a special interest in the Scottish Enlightenment. He is author of five books, including Tolkien and The Lord of the Rings: A Philosophy of War (2014) and Veneration & Refinement, which is an open-source, interactive website found at http://www.ethicsoffashion.com/.

From the Multiversity Cave: The Universal Sciences