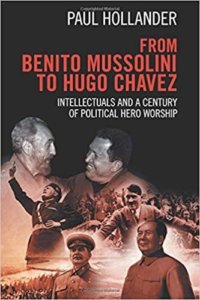 Paul Hollander fled his native Hungary after the 1956 revolution and became an American academic with a recurring interest in the pathologies associated with communism. He earned the Ph.D. from Princeton University and a B.A. from the London School of Economics. Until his death on April 9th of this year, he served as Professor Emeritus of Sociology at the University of Massachusetts Amherst.

Back in 1981, Hollander had asked why certain intellectuals publicly supported ideologies such as Marxism. He returned to the question in 2017 with From Benito Mussolini to Hugo Chavez. This time, he updated the data and focused more on the attraction that intellectuals feel for authoritarian or totalitarian leaders whose record of atrocities is now hard to ignore, let alone defend. The relationship between a strong man and the public intellectual turns out to be a curious phenomenon.

Contrary to assumptions that intelligence and a superior education equip a person to see through to the evil of such men as Hitler and Stalin, in a surprising number of instances it seems that intellectuals may have been somewhat more susceptible to hero-worship than the general populace. Hollander documents individual cases and offers a range of possible explanations.

Many of these prominent figures did eventually renounce the leaders they had praised, but only once the brutality of their regimes became evident. They saw themselves as having been duped (299-305). By way of contrast, opportunists remain ostensibly loyal to these leaders a lot longer for the sake of their reputation and career (e.g. 98, 127). Then there is a startling number of them who knew about the brutality and excused it or even rejoiced. In a broadcast about the book, Hollander even calls them a “moralizing self-appointed elite.” These we might label in the words of Eric Hoffer (1951) the True Believers.

Hollander insists that the total number of intellectuals who fit his study is rather small, proportionate to the population (308). Plenty of their peers never did succumb to these blandishments, and quite a few such as Solzhenitsyn rose up in public opposition (293). Hollander admits that he has no statistics, one way or the other (308-309). What he does have is a record of the public statements when intellectuals celebrate and defend these leaders. After a point, it becomes impossible to deny that this happens repeatedly. What Hollander wanted to figure out is why.

Hollander’s explanation falls into six categories. First, there are those who were simply ignorant or otherwise failed to deploy their critical powers. Ordinarily, they changed their tune once the facts became known. Second, the opportunists used their access to a leader to curry favor from the regime and pose themselves as prominent critics of the opposition. Third, these intellectuals had come to reject what they saw in their own society as the prevailing trend toward capitalism, religion, or modernity. In other words, they were recoiling from a system they saw as corrupt and hoping to latch on to a better alternative. These tend to be the idealists, with higher expectations about what is possible. Fourth, many were flattered assiduously by the leader, fawned over in some cases and treated quite lavishly — in part for cynical purposes. Fifth, these intellectuals often had trouble discerning moral distinctions between what these leaders were doing and what other regimes have also done. Is it so wrong, they ask, in comparison to what our side has perpetrated? How are we any different? They often speak in terms of moral equivalence. Sixth, because these leaders frequently claim that the basis for their authority resides in the latest findings of science, intellectuals often want to champion the real-world application of the findings of other intellectuals. They want to be found on “the right side of history”. Lest we forget, both Nazism and Marxism were held forth in their time as scientific (97).

Reasons aside, Hollander has to acknowledge that some intellectuals are simply attracted to charisma, to the personality and passion of the authoritarian (300). These rulers can be seen to live authentically (293), even if it is a lie. While everyone else keeps talking about what must be done, at least they are doing something about it. Their whole persona seems integrated, laser-focused, and not hopelessly fragmented like so many modern lives. For someone committed to the perfectibility of human nature (305-312), they represent what might yet be possible.

Hollander is by no means the first scholar to notice the strange relationship that results. His book takes it place on the library shelf next to extended studies by Roger Scruton, Raymond Aron, Francois Furet, Mark Lilla, Paul Johnson, Richard Posner, and Zygmunt Bauman. They all extend the original hypothesis of Julian Benda, who wrote in 1927 about the treason of the clerks. A worthy companion to these works is a recent collection edited by Michael Desch that the University of Notre Dame Press just published in 2016 as Public Intellectuals in the Global Arena.

For a few pundits, the brutality of these regimes is actually, in their opinion, consonant with progress. As Walter Duranty liked to say, “You can’t make an omelet without breaking a few eggs” (125). The terror is, in their calculation, a necessary step toward a better world. It is regrettably instrumental.  And for a very small number, the terror is actually the whole point, the desideratum, a kind of vindication that the Good will not only triumph, but will also inflict suffering on the Bad. Such suffering itself is good, they will claim (e.g. 292). Clearly, Hollander finds these particular opinions reprehensible.

The literature on leadership has previously examined the idea of hero-worship and the cult of personality. Many scholars and educators tend to ascribe this phenomenon to a previous era. Or they define it away by saying that coercion is not leadership, and therefore they have no interest in this whole opera buffa of tyrants and their egg-headed minions. Hollander would disagree with both assertions. Intellectuals continue to ally themselves with bad leaders. And we should all care that it happens, for perversions of leadership warrant study – even if only as counter-examples against which to teach the next generation.

Hollander was sensitive to the accusation that he tended to pick on leftist intellectuals (as Roger Scruton unapologetically did in 2015). For one thing, Hollander tried to broaden his scope to include leaders who do not fit the traditional strictures of leftism, such as Syria’s Bashar al Assad (viii). For another, he admits in his last book that leftist intellectuals are more likely to fit the profile of self-appointed critics of modernity, especially as enacted in the West, so their search for a better alternative makes them especially vulnerable to being misled whenever a leader promises to usher in a better world.

Hollander appreciated that the “useful idiots” (as Lenin supposedly called them) come in a tremendous variety. Their culpability is so uneven that it becomes difficult to tar them all with the same brush. An observer who simply notes the successes of a new regime in fixing certain local pathologies – which nearly all of them do, initially – is a far cry from a zealous advocate for devastation and violence. Lumping them together can be confusing. Also, Hollander recognizes that he has accumulated a catalogue of anecdotal evidence. He does not pretend to have found the conclusive causal link as to why this happens. Nevertheless, he has made a plausible argument that the sociological form bears watching.

From Benito Mussolini to Hugo Chavez overwhelms the reader with plenty of examples. It also raises important questions about contemporary hero worship, making useful categories for studying the phenomenon afresh. Hollander studiously avoided the condescension and partisanship that accompanies similar books. And he recognized the limitations of what he was able to achieve.

Perhaps the most severe judgment made in the pages of this book, no matter how obliquely, is that once an intellectual abandons the criterion of truth, he or she becomes vulnerable to the attractiveness of raw power in service of an ideal — at which point, they no longer qualify as intellectuals. Their fascination betrays them.

[1] The author would like to thank Moriah Poliakoff for her critical assistance.

Nathan Harter is an Associate Editor of VoegelinView and a Professor of Leadership Studies at Christopher Newport University. He is author of three books, with the latest being Foucault on Leadership: The Leader as Subject (Routledge, 2016).

Review Maladies of Modernity: Scientism and the Deformation of Political Order

A New History of the Humanities: The Search for Principles and Patterns from Antiquity to the Present