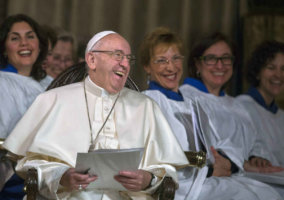 Pope Francis, in his wise reflections on holiness in Gaudete et Exsultate (“Rejoice and Be Glad”), discusses Gnosticism and Pelagianism as “two subtle enemies of holiness.”

The Pope calls them “anthropocentric immanentism disguised as Catholic truth.” That is, they are both unhealthy patterns by which humans stay focused on themselves and on worldly concerns.

His discussion of Gnosticism notes how its essential mental pattern is to “keep one imprisoned in his or her own thoughts and feelings.”

“Gnosticism is one of the most sinister ideologies because, while unduly exalting knowledge or a specific experience, it considers its own vision of reality to be perfect,” says the Pope.

It is important to note reality has delightfully mysterious dimensions, which transcend our finite abilities to grasp or comprehend them. “When somebody has an answer for every question, it is a sign that they are not on the right road,” writes Francis. “They may well be false prophets, who use religion for their own purposes, to promote their own psychological or intellectual theories.”

Gnosticism fails to respect the beautiful reality of transcendence. But the Pope reminds us: “God infinitely transcends us; he is full of surprises. We are not the ones to determine when and how we will encounter him; the exact times and places of that encounter are not up to us. Someone who wants everything to be clear and sure presumes to control God’s transcendence.”

Eric Voegelin, one of the most interesting philosophers of the 20th century, used the concept of Gnosticism to analyze the political disorders of our times. For him, Gnosticism is an acute form of alienation from the world and rebellion against God.

Summing up Voegelin’s analysis, Voegelin scholar Lee Trepanier writes: “Gnostic movements have normative features, such as an obsession with temporal evil that is caused by social disorganization.”

In other words, rather than seeing evil as a ubiquitous “condition of human experience,” the Gnostic blames society, because the Gnostic thinks “salvation from this evil can be achieved through a historical process” of reforming society, says Trepanier.

As Trepanier notes, the political result is a deformity of the rule of law. The Gnostic reordering creates a new “type of law where the ordering elements of society are rooted not in reason or revelation but in grotesque fantasy and the destructive whim of madmen.”

Drawing upon on detailed studies of such political insanity, Voegelin gave a series of lectures in 1951 later published by the University of Chicago Press as a little book, The New Science of Politics.

A glimmer of hope, Voegelin said, politically shines out in the world wherever political order reflects “the truth of the soul.” But Voegelin also warned us, “it will require all our efforts to kindle this glimmer into a flame by repressing Gnostic corruption and restoring the forces of civilization.”

In another little book, Science, Politics, and Gnosticism, Voegelin gave a summary of the six characteristic features that together help us to identify Gnosticism. The first three express the Gnostic’s alienation from the social order: (1) dissatisfaction with one’s life; (2) belief that one’s life is unsatisfactory because the world is somehow suffering from poor organization, and (3) salvation from the evil of the world’s disorder is possible.

The last three exhibit the Gnostic’s rebellion against God and the metaphysical fabric of reality. The Gnostic thinks that (4) to bring order, the order of being must be altered and reality must thus be remade on some fundamental level; (5) one must will to bring about this alteration in a historical process; and (6) special knowledge (“gnosis”) of the required plan is available to the intellect that wants to know what to will in order to change the fundamental structure of being in history.

As Pope Francis writes in Rejoice and Be Glad, this unhealthy pattern of thought ensnares many people today because it offers a mindset that is “strict and allegedly pure, and can appear to possess a certain harmony or order that encompasses everything.”

No doubt that’s why this unhealthy mindset can never embrace a healthy sense of humor.

This was originally published with the same title in The B.C. Catholic on June 4, 2018.

Virtue and the City