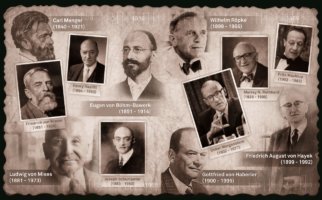 The making of the modern market economy is often attributed to Adam Smith. Though free market theorists see the primary roots here, the view is not shared by all.

Murray Rothbard is among the prominent theorists who understand the Late Scholastics as the main protagonists. The Scholastics had moral considerations as the original basis and their reflections, which in turn developed in the defense of free exchange, property rights and the setting of prices by markets. Alex Chafuen would later condense the thinking on these topics across centuries in his 2003 work, Faith and Liberty: The Economic Thought of the Late Scholastics, argued by some as best stand-alone study of the subject.

Rothbard is a member of the so-called Austrian School of Economics, one of the most prominent associated with free enterprise in a tradition of ordered liberty. Voegelin was part of the early seminars held by the “Austrians,” many of whom saw a link with the Late Scholastic thinking. More recent intellectuals like Michael Novak would draw a similar connection.

The Austrian School places praxeology at the center of the field. Namely the notion human beings act. For critics it is a redundant concept. Other economic ideas, including in defense of free markets, use models with assumptions that deny or underplay the centrality of human action. Human action cannot be predicted the way the hard sciences can predict non-human realities. Praxeology therefor limits the viability of government power to determine outcomes, despite stated intentions.

The Austrian School methodology is, I argue, not only compatible with Voegelin’s view of the Imago Dei. With the human person is at the center, not abstract designs, Voegelin’s works are a basis for a philosophical defense of the Austrian School methodology. In a mutually reinforcing manner, the praxeology both defends human dignity and in turn human dignity forms the basis for the economic liberties, which are constituent of our human freedom.

Economics is often designated value free. Yet all economics contains first principles, with assumptions on the human person (at its narrowest, Homo Economicus or its variants). Voegelin’s work, I argue, provides an important contemporary case for Austrian methodology. The first principle of the Imago Dei is grounded in philosophy, not economics, but renders a moral basis for praxeology that can only be found outside the field of economics – by recognizing men and women as more than their material considerations before proceeding to focus on those very considerations.

Historical assessments of Voegelin and the Austrian School rests on Voegelin’s early participation in the informal seminars put together by Mises. While Voegelin had an interest in economic ideas, he appears to have believed they lacked important dimensions.

What was insufficient? Perhaps a lack of a philosophical underpinning of praxeology and a moral defense of it beyond observed reality. Secondly, economics is not an end in itself; but describes one aspect of the bigger human reality which occupied Voegelin’s mind. If Hayek warned us of the Road to Serfdom, Voegelin was concerned with why human beings would be tempted to take it in the first place. In his letter to Hayek he mentions the Gnostic problem explicitly as a matter not considered by the economists.

For some free market advocates, markets have become a chief area of focus laden with assumptions which assess human beings as objects under the hard science.  It is also seen in models of state capitalism too. Indeed, there is a Gnostic element to many defenses of free markets, as I argue recently in Law & Liberty.

These ideas undermine the centrality of the free person in the dynamic creation of wealth and economic development. It is perhaps no surprise that George Gilder who critiques these contemporary defenses of capitalism and markets which assume markets as technical systems – not agglomerations of billions of free human actions every day – is the same author to reference Voegelin.

Free markets are an embodiment of the freedom owed to human beings and the dignity to which we are endowed. Free markets are productive because they have free persons at the centre, able to act (praxeology) in their creative capacities that serve others in a system of free exchange. Praxeology offers a methodology for ordering our economic lives with the human being at the center, one which is rooted in a defense of human dignity best articulated by Voegelin and which in turn sets limits on the state.

Today the moral defense of free economies and the basis for open markets may need to become a greater pre-occupation – indeed it should be.

In this regard Voegelin’s work can be read today with the awareness that the makings of modern economics lie in a Scholastic pre-occupation with the transcendent and human dignity to which he committed his life’s study.

In the historic development of the market economy, thick moral arguments were vital throughout the centuries beginning with the Late Scholastics through to Adam Smith (whose Theory of Moral Sentiments preceded The Invisible Hand). Today efficiency arguments are far more pervasive.

In such a scheme of economics, there is not growth for growth’s sake alone which could justify in manner of intervention to prop up, create or save markets from the top-down. Limits to the state find their roots in the dignity of the human persons who creates economies, underlying the axiom of praxeology – not simply as a description of the reality that we do act, but a recognition of the reality in which human beings act.