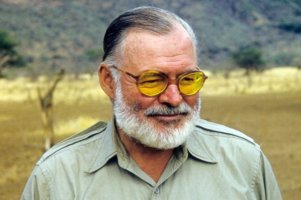 In A Farewell to Arms, Ernest Hemingway portrays the character of Frederic Henry as a hedonist, a young man who has always been indulged but is trapped by the circumstances of war. He lives each day completing his work and pursuing his pleasures, likely aware that he could be killed at any moment. And yet, although Henry is surrounded with other characters who act as he does, he seems to blindly search for a greater meaning for his life, almost as if mining for that singular thing of value, hoping for better and fumbling through.

At the beginning of the novel, Hemingway likens Henry to his immoral peers, claiming like Rinaldi that they are all fire and smoke and nothing inside. Henry drinks wine with his companions and goes to the whorehouse with the captain. He drinks regularly with his roommate Rinaldi at any time of day and womanizes both at the officer’s whorehouse and in town with the new nurses. Being with women is just a game for him, and he claims that he did not care what he was getting into. It was simply something to do. Henry is much like Aristotle’s incontinent man who pursues pleasure and does experience momentary regret, but not enough to elicit change. Henry even says to the priest, we did not do the things we wanted to do; we never did such things. Though meager, Henry’s sense of morality, or at the least, his awareness of moral choice, does exist.

Once Henry is wounded though, Hemingway clarifies Henry’s budding perspective. Henry agrees with the priest that the war disgust is depressing and acknowledges that he does not know God, only fears Him. So though he admits that God exists and that man is in need, Henry chooses not to rely upon God, but rather upon himself. Henry’s disposition towards Catherine also changes and matures. Once in the Milan hospital, Henry sees Catherine and knows that he is in love with her.

At first in Book I, he had lied to placate her, and she was fully aware of and complicit in his game. But now, it’s as if he accidentally stumbles upon the greater meaning he unconsciously desires—love. Hemingway describes it as being never lonely and never afraid when we were [are] together. Lust or comfort, this love is clearly skewed. As Henry recuperates, Catherine continues to visit him, and they spend their nights together. In fact, they live almost exclusive of others and find meaning only in themselves and their relationship. Hemingway’s humanistic view relies solely on their choices, their mutual self-reliance.

At the end of his escape, Henry reasons that all he wants to do in life is eat and drink and sleep with Catherine. This sentiment, this declaration of need, dominates Henry’s reasoning through the remaining chapters. Henry later states to Count Greffi that the thing he values most is Someone I love, and the Count replies that that is a religious feeling. For Henry, being with Catherine is almost transcendental; it becomes his purpose for living, particularly because he deserted the Italian army not only for his survival, but also for hers and the baby’s. In spite of the fact that Henry becomes entirely dependent upon Catherine for his happiness, Hemingway ironically portrays Catherine as a shallow automaton who tirelessly asks Henry how she can please him or make him happy. Even in her final throes of labor, she doesn’t want to make trouble. Her character shows no depth, yet Henry remains fervently devoted. Perhaps this obsession is one reason Henry’s path to happiness fails upon Catherine’s death and that of their son.

By Hemingway’s closing commentary, we now know that Frederic Henry is not only a pleasure-seeking humanist, but also a fatalist. Henry blames the world, or vaguely God, for his tragedy: You never got away with anything. He’s convinced that the immorality of his nights in Milan led to this negative end. Henry acknowledges what most would term “sin” and attributes these happenings as direct consequences, of reaping what was sown, without a hope of eternity: You died. You did not know what it was about, and Catherine too terms her imminent death a dirty trick.

This hopelessness is a just denouement for a character who lived a life without faith from the beginning, but the bigger question just might be what Hemingway was illustrating about the emptiness of the generation in which he lived when the novel was written in 1929. If we unthinkingly pursue pleasure and live for nothing except ourselves, what are we left with?

This was originally published with the same title in The Imaginative Conservative on March 5, 2018.

In Praise of the “Divine Madness”