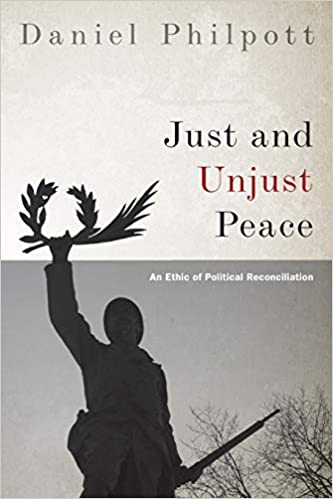 Should war criminal be granted amnesty if their assent is needed for a peace settlement? What sort of punishment do human rights violators deserve? Can and should leaders apologize on behalf of their nations? Are reparations owed to representatives of past generations? Can states forgive?

Philipott offers the framework of reconciliation to address these and other questions his Just and Unjust Peace: An Ethic of Political Reconciliation. Within this framework, Philipott proposes six holistic practices that put the ethics of reconciliation into political practice: 1) building socially just institutions and relations between states; 2) acknowledgement; 3) reparations; 4) punishment; 5) apology; and 6) forgiveness. Rather than backwards looking, Just and Unjust Peace looks at the future by offering a set of standards by which the justice of peacebuilding can be evaluated.

For Philipott, reconciliation is the restoration of right relationship in politics where respected citizenship is defined by human rights, the rule of law exists within political communities, and respect for international law is honored between political communities. Religious leaders, like Cardinal Tutu and Pope John Paul II, have been strong advocates of reconciliation in global politics and have brought concepts like mercy into political discourse. Philipott draws from both religious and secular traditions to show political reconciliation can work in global politics.

In the first part of the book, Philipott defines justice as reconciliation and roots it in multiple religious tradition (Judaism, Christianity, and Islam). Reconciliation invites participants in a dialogue to voice the full range and depth of their beliefs in the hope of reaching an Rawlsian overlapping consensus. This consensus of reconciliation requires the work of government, the inclusion of punishment, the active participation of the injured parties, and the acknowledgement that reconciliation is always partial and never complete because reconciliation is ultimately an aspirational ideal.

Philipott also draws from the secular tradition of liberalism but does not share all of its commitments. Reconciliation converges with the liberal tradition insofar as it endorses human rights, democracy, rule of law but also maintains value pluralism. This differs from liberals like Gutmann and Thompson who argue that reconciliation is permissible if it only achieves fundamental rights, liberties, and democratic procedures but nothing more. Philipott’s reconciliation goes beyond that to address not only the primary wounds of injustice (e.g., direct harm) but the secondary wounds that linger (e.g., political memory, emotional trauma).

In the second part of the book, Philipott draws upon Rawls’ public reason as a mechanism of how religion can contribute to political reconciliation. The religious must give up their hope of establishing political hegemony for their faith and instead endorse toleration and proceed according to public reason. By doing so, society benefits not only from stability but a respect for its citizens in a consensus found by public reason. Philipott then proceeds in showing how Judaism, Christianity, and Islam each can contribute to our understanding of reconciliation as a form of mercy and a response to evil, concluding there is enough overlapping consensus among these three religious tradition where a common understanding of reconciliation can be achieved.

In part three Philipott shows how to practice political reconciliation by building just institutions, acknowledging violations, offering reparations and apologies and how these practices lead to a restoration of relationships between citizens and the state and among individuals themselves. Philipott also favors punishment as a practice of political reconciliation because of its restorative effect for victims and the practice of forgiveness, although it may not morally appropriate at all times. By providing historical examples, Philipott demonstrates how these practices have been adopted by different countries and evaluates how they successful they have been.

Justice requires people to confront their past and what actions they should take now to address it. Political reconciliation is a way where this can transpire not in the utopian hope that enemies become friends but that incremental progress can be made and right relationships can slowly be restored. While the absent of natural law theory is conspicuous, Philipott’s book incorporates the religious traditions of Judaism, Christianity, and Islam in dialogue with secular accounts of political reconciliation. Optimistic but not naïve, Just and Unjust Peace offers a path to both understand and move past violations against human rights and justice towards a more restorative and flourishing relationship with God, the state, and ourselves.

The Parasitical Mind: How Infectious Ideas Are Killing Common Sense
Response to “The Figure of Modernity” & The Cosmology of the Architecture of Cities
Lost in Thought:  The Hidden Pleasures of an Intellectual Life
Working Knowledge: Making the Human Sciences from Parsons to Kuhn