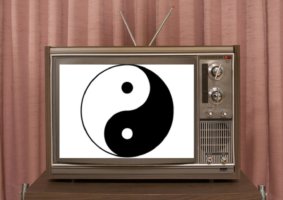 The West shall shake the East awake
While ye have the night for morn.
— James Joyce, Finnegan’s Wake

In Chapter 3 of Understanding Media (1964), “Reversal of the Overheated Medium,” Marshall McLuhan describes how technological enhancements tend to undergo reversals as they work themselves out within the wider environmental context. For example, the enhancement of roads reverses the relationship between city and countryside. Originally, the farm in the country is the destination for work, and the city is the destination for leisure. But the more that roads advance and enhance travel, as they become highways, the city reverses into the place of work. The countryside then becomes the destination for vacations and relaxation.

Traditionally, these sorts of ironic reversals have not gone entirely unnoticed. Wisdom philosophy in both the East and West, across cultures, has taken note. In order to comment on the current reversal that is taking place under the influence of “electric” technologies, McLuhan cites “a Chinese work” translated by Arthur Waley in a book with the name The Way and Its Power. Although he doesn’t name him, McLuhan is actually quoting the Tao te Ching of the ancient Chinese philosopher Lao Tzu, and it is from Chapter 24 of that work that McLuhan quotes:

He who stands on tiptoe does not stand firm;
He who takes the longest strides does not walk the fastest…
He who boasts of what he will do succeeds in nothing;
He who is proud of his work achieves nothing that endures.

We may note here that James Legge translates this same chapter by assigning it the title, “Painful Graciousness,” and by rendering the phrases quoted by McLuhan thus:

He who stands on his tiptoes does not stand firm;
he who stretches his legs does not walk (easily). …
he who vaunts himself does not find his merit acknowledged;
he who is self- conceited has no superiority allowed to him.

The point of the aphorisms seems to be clear enough. They counsel moderation, in order to avoid reversals. The followers of wisdom will seek to avoid undergoing the reversals precipitated by such foolishness. Hence the chapter ends with this admonition:

Such conditions, viewed from the standpoint of the Dao,
are like remnants of food, or a tumour on the body, which all dislike.
Hence those who pursue (the course) of the Dao do not adopt and allow them.

In other words, just as the plentiful bounty of the banquet reverses into the heaps of spoiled leftover food, or reverses from the food eaten into the expulsion of excrement, so too does any process eventually pushed to its culmination. A body that interacts with the environment will eventually sustain damage from that environment: a tumor will grow, precisely as the culmination the ongoing interactions, and the vigorous actions of life will reverse into death. The wise man knows the logic of this cycle, for it is the way of all things. Accordingly, action and interaction can be moderated, to bring moderation into being as virtue of wisdom guiding all worldly activity.

The translation of this same passage by Stephen Addiss and Stanley Lombardo nicely captures how immoderate behavior is contrary to “the way” of wisdom:

On tiptoe: no way to stand.
Clambering: no way to walk. …
Self-praise: no way to flourish.
Complacency: no way to endure.
According to Tao,
Excessive food,
Extraneous activity
Inspire disgust.
Therefore, the follower of Tao
Moves on.

But my favorite English translation of the Tao te Ching is frequently that by Keith Seddon. He brings an unusually heightened philosophical sensitivity to many passages. Here he too, like Addiss and Lombardo, emphasizes the folly of the sort of “excessive” action that is contrary to the moderation of “the way”:

In The Abolition of Man, C.S. Lewis famously wrote about the relationship between the Tao and natural law. R.L. Wing, in translating this chapter from the Tao te Ching, gives it the title: “THE DANGER IN EXCESS,” and renders it thus:

Those who are on tiptoe cannot stand firm.
Those who straddle cannot walk . . .
Those who make claims can have no credit.
Those who boast cannot advance.
To those who stay with the Tao,
These are like excess food and redundant actions
And are contrary to Natural Law.
Thus those who possess the Tao turn away.

When McLuhan quotes from this chapter of Lao Tzu, he also references the idea of hubris in Greek tragedy, interpreting it as something “creative” yet involving “its own kind of blindness.” The familiar example of Oedipus, able to solve the riddle of the Sphinx, but blind to the crime he has committed, is invoked by McLuhan. The blindness precipitates the dramatic reversal, the peripeteia, in the tragic action onstage.

McLuhan notes that the technologies enabled by electricity do not simply exacerbate the shift of our work destination from countryside to city (as was accomplished by the reversal precipitated by the culmination of road technology in highways). Rather, electric technology tends to decentralize. That is, there is now no longer a main center or hub. There is no main destination, whether city or countryside.

Instead, there is a reversal of the global village into the global city. The entire planet is one destination. The retribalization of society (into a global village) by electric technologies, in which everyone is decentralized enough so that we need no other destination than home, eventually reverses into a universal alienation (the global city) where no one is able to feel at home—because there is no escape from the decentralizing, fragmenting arc of increased technological enhancements.

With less and less labor force participation, as more and more automation of jobs happens, society starts to reverse into a universal leisure can initially seem unbearable. Strangely, leisure as a respite from work morphs instead into leisure as one’s new job description. The new job for humans is to have no job.

If this apparent future for the human environment is a consequence of immoderation in the deployment of our technological tools, then there is still a path open for wisdom. Moderation can still bring balance. In our case, the “reversal of the overheated medium” of the Internet into a new sort of economy can be met with the effort of moderation to “cool things down.” This cooling can happen through contemplative intellectual activity that meditates upon our present situation. The reading of Great Books, and the cultivation of the liberal arts, becomes essential.

If leisure is now a problem, then ancient wisdom holds potential solutions. With McLuhan, we can recognize the cross-cultural sources of this wisdom and bring them into the new global curriculum. The traditional recognition of reversals still affords us the opportunity to escape the cycles of reversals. At least, that is what the tradition has recognized, when it has learned to contemplate things from the standpoint of eternity, a point of view to which we still have access—even in the electric age.

This was originally published with the same title in The Imaginative Conservative on August 31, 2016.

The Porosity of the Between with a Poem by Michael Longley