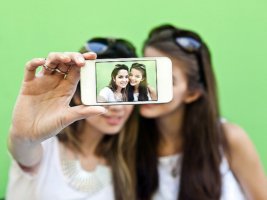 He could not go.
He wanted neither to eat nor to sleep.
Only to lie there — eyes insatiably
Gazing into the eyes that were no eyes.
This is how his own eyes destroyed him.
— Ted Hughes, “Narcissus”

Unknowingly he desires himself, and
the one who praises is himself praised, and,
while he courts, is courted,
so that, equally, he inflames and burns.
How often he gave his lips in vain to the deceptive pool,
how often, trying to embrace the neck he could see,
he plunged his arms into the water,
but could not catch himself within them!
What he has seen he does not understand,
but what he sees he is on fire for, and
the same error both seduces and deceives his eyes.
— Ovid, Metamorphoses, Book III, trans. A.S. Kline

In Chapter 4 of Understanding Media (1964), “The Gadget Lover: Narcissus as Narcosis,” Marshall McLuhan describes how technological innovations furnish us with extensions of our own selves, even though we do not realize it. McLuhan notes that narcosis is a Greek word that means “numbness.” Narcissus was so numbed by the image of himself reflected on the water that he did not realize that he was looking at himself. The same is true of us when we use our hi-tech gadgets.

It has become a cliché to say that people who take selfies are “narcissistic.” But perhaps McLuhan can help us redeem this cliché. The sort of Narcissus-narcosis that we experience when we take selfies with our smartphone cameras is significant not so much because it is evidence of vanity. It may very well be. But it need not be. In fact, the number of people taking selfies is so large that it is probably too crude and reductionistic to say that they are all “narcissistic,” as if they are all excessively vain. Rather, it is more accurate to say that everyone with a smartphone is narcissistic in McLuhan’s sense: They are so numb that they do not realize these smartphones are extensions of their own selves. We are all Narcissus now.

That is because it would be a mistake to think that these devices are mere tools, which can be used and not used at will. Rather, they have now become part of our own selves, and to discard them would be a form of total suicide. Therefore, we should turn our attention to our induced numbness instead. How is it that we have become so numb that we do not realize that these gadgets are extensions of our own bodily powers? Like Narcissus, how is that we fail to realize they have become an indivisible part of us? Moreover, they have even become part of us in ways we fail to realize. Our dependence is greater than we imagine.

“With the arrival of electric technology,” writes McLuhan, “man extended, or set outside himself, a live model of the central nervous system itself. To the degree that this is so, it is a development that suggests a desperate and suicidal autoamputation, as if the central nervous system could no longer depend on the physical organs to be protective buffers against the slings and arrows of outrageous mechanism.”

In other words, “autoamputation” is a kind of survival mechanism, by which the body tries to cope with the technological change currently transforming the environment. But the form this attempt at survival takes is the construction of idols. In fact, any use of technology is likened by McLuhan to the beholding of idols. On this point, he quotes Psalm 115, in order to suggest how humans can come to conform themselves to the idols that they behold:

In other words, we become like unto the technologies that we construct as extensions of our selves. That is what it means to call them “extensions.” And we are inevitably worshiping ourselves in our fascination with them. As long as we are numb to this fact, we are engaged in mindless worship of these idols.

However, when we become awake, when we realize what is going on, then we are no longer like Narcissus and no longer numb to the reality of what is happening. We then have the opportunity to no longer be “in love with” (to be worshipping) our extended selves. We can abandon what McLuhan calls “the Narcissus role of subliminal awareness and numbness in relation to these images of ourselves.” Otherwise, we are in danger of serving these objects as if they were gods. “By continuously embracing technologies, we relate ourselves to them as servomechanisms,” writes McLuhan. We become servants of the cult of mechanism.

The most curious thing about this cult of technology into which we can mindlessly slip is that we now, for the first time in history, are truly capable of becoming fully conscious of this false technological religion of the worship of ourselves as false idols. “Apparently this could not have happened before the electric age gave us the means of instant, total field awareness,” writes McLuhan. While we may have numbed ourselves, as usual, with our technological gadgets, our saving hope lies in becoming explicitly conscious for the first time of this fact. McLuhan notes that “it is strikingly the age of consciousness of the unconscious.”

There is no escape from our awareness of our increasing dependence on these extensions of our selves. “In the electric age we wear all mankind as our skin,” observes McLuhan.

We can be in love with this state of affairs, like Narcissus, in which case we will have to become numb, rather than plumb the depths of full awareness of our situation.

The alternative would be not to worship this networked electric idol. We would have to awake from our numb slumber. While this is entirely possible, it is, as McLuhan points out, an overwhelming shock to the system. But perhaps it is the price to be paid for enlightenment. Sleepers, awake . . .

This was originally published with the same title in The Imaginative Conservative on September 16, 2016.