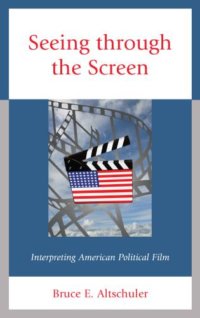 Bruce Altschuler is professor emeritus of Political Science at SUNY Oswego, where he specializes in American government. His efforts at interpreting American political films risks upsetting film studies professors, some of whom are leery of what they regard as intrusions by political scientists into their discipline. But he also risks objections from mainstream political scientists, some of whom question the relevance of interpretations of art to a scientifically rigorous understanding of politics. A response to the former would focus on the political expertise that Altschuler can bring to bear in helping us to understand some undeniably political aspects of the films to which he draws our attention. A response to the latter would make the point that art shapes the soul, not only in what it finds appealing as beautiful, but also in what it finds appealing as good. Films can therefore produce a kind of political education in their audience, and so they merit the serious attention of political experts.

But what constitutes a political film? Altschuler addresses this key question in his introduction, steering a middle path between an overly narrow definition that identifies political films as concerned with “politics and the political process” and an overly broad definition that considers “nearly every American film [to be] political” (vii). He properly points out that the former definition excludes “films about the media, interest groups and even many courtroom dramas.” (viii) The latter definition is inadequate because “if we consider all films to be political, we have a category that fails to classify and is therefore of no practical use.” (viii) Altschuler is right to reject both definitions as inadequate, but he doesn’t quite explain what is wrong with the latter definition. That understanding is faulty because it politicizes all of life, including what is private. Altschuler’s preferred definition of political films rests on his understanding of the term “political”. He settles on two related definitions. One, by James Eisenstein et al., claims that “politics consists of influence processes involving both conflict and cooperation, and occurring both within and outside of government, that authoritatively determine for a wide range of groups who gets what when and how?” The other, by Thomas Patterson, defines politics as “the means by which society settles its conflicts and allocates the resulting benefits and costs.” (ix) These definitions are both inadequate, displaying a bias in favor of the typical concerns and methods of modern political science. A better definition might well be that politics is concerned with the question, Who rules, and to whose benefit?

Problematic as Altschuler’s preferred definition of politics is, it does not harm his choice of films, because as it happens Hollywood has so often produced political films centered around narrow modern concerns and methods. It is perhaps too much for us to ask for more than this from Hollywood. Political films that might move beyond this flawed understanding – say, about political philosophy – would never be made or, if they were, would fail commercially. If they are to be addressed in films, the most important questions in politics can only be approached indirectly.

In his categorizations of political films, Altschuler makes the best of the definitional constraint that he is under. The book is divided into eight chapters: Political Campaigns, one each for the three branches, The Media, War and Peace, Domestic Issues, and State and Local Politics. Each chapter begins with a brief introduction, followed by a discussion of four to ten films. The oldest film considered is Gabriel Over the White House (1933) and the most recent is Selma (2014). The rest are more or less evenly spread out among the intervening decades. Some of the films affirm the fundamental goodness of America and American ideals (e.g., Mr. Smith Goes to Washington (1939) and The Man Who Shot Liberty Valence (1962)).  Others do not. Here we arrive at a problem with the book: a significant number of the films Altschuler has selected contain crude or biased repudiations of either America or its ideals. From the amateurish psychoanalysis in W. (2008), to the absurd parody Dr. Strangelove (1964), to the identity politics-laden Philadelphia (1993) and Milk (2008), we are reminded of just how bluntly politically biased Hollywood is, and has long been. Were these “problem” films to exhibit the nuance about the human condition of, say, The Searchers (1956) (a classic, must-see film discussed in the book), they would be of greater political interest. Also by way of comparison, as political vehicles, many of the films in this book are put to shame by the engrossing and insightful (and all-too-short-lived) television series Boss (2011-2012). To be sure, most of the “problem” films are strikingly artistic, but they fail as political films and should have been dropped.

The second problem with the book concerns the discussion of individual films. Altschuler’s method is to provide a plot summary of each film, interspersed with observation, comments, and some analysis, and then some closing questions for discussion. Most of the films merit more analysis than what he provides. It would have been better to assume that the reader is familiar with the plot of each film, drop the plot descriptions, and use the extra space to provide that extra analysis.

Despite these problems, the book’s better film selections can be helpful to film studies and political science professors, especially in the formulation of film choices and discussion questions.

The Spiritual in Poetry and Art

The Temporality of Political Obligation

Pursuits of Wisdom: Six Ways of Life in Ancient Philosophy from Socrates to Plotinus